Many behaviors and ideas associated with eating disorders start at early ages. According to the National Association of Anorexia Nervosa and Associated Disorders, 42 percent of first to third grade girls report wanting to be thinner and 81 percent of 10 year old children are afraid of being fat.

Junior Emily Starks said that growing up, she and other kids grew to associate weight with beauty, which contributes to unhealthy body image.

“When we were little I feel like all we knew was the word ‘fat’,” Starks said. “So if you’re fat we will attach stigma to it as if being fat or being bigger is a bad thing.”

Student Assistance Counselor Hollie Wilson believes that comments teens hear can cause them to develop unhealthy ideas about their bodies.

“If you live in a home environment, or you’re surrounded by adults, or peers who the focus is on, ‘You look beautiful today’, or ‘you look so cute in that outfit today’, what you start to associate with is that your positives come from your physical appearance,” Wilson said.

“If people are surrounded, and you’re having lunch, and somebody says ‘You shouldn’t eat that’, or ‘You shouldn’t have that much’ and ‘That’s not good for you, you’re going to gain weight,’” Wilson said.

As the Student Assistance Counselor, Wilson watches for signs that might suggest a student has an eating disorder or unhealthy eating habits.

“What I’m looking for is maybe somebody that is coming to see me personally during lunch, or avoiding the cafeteria or areas that they provide lunch, maybe being isolated during the lunchtime period,” Wilson said.

Social media has also affected the way teens view their bodies. A Wall Street Journal article released on Sept. 14 detailed research done by Instagram and Facebook on how one in three teen girls and 14 percent of boys could trace body image issues back to Instagram.

Former Facebook employee, Frances Haugen, turned whistleblower when she spoke to Congress about the effects of Instagram on teens on Oct. 4.

“It’s just like cigarettes, teenagers don’t have good self…regulation,” Haugen said. “They say explicitly, ‘I feel bad when I use Instagram and yet I can’t stop.’”

On social media platforms, many influencers and celebrities post photos, edited and doctored to perfection. Students who see these photos may try to edit their own photos to look more like these influencers.

Junior Emily Starks said that filters and apps like Facetune help teens to change their appearances to match what they desire to look like.

“It’s so normalized to edit and change yourself,” Starks said.

Senior Emerson Owens said that when teens see people with their ideal bodies on social media, they may develop eating disorder symptoms to look more like them.

“I know a lot of people that see people smaller than them on social media and feel very bad about themselves to the point where they then develop an eating disorder,” Owens said.

Haugen revealed during the hearing that Facebook has run experiments on how young Instagram users could be directed to eating disorder posts, and that the company is aware of the effects.
“So Facebook knows that they are leading young users to anorexia content,” Haugen said.

“Everyday I scroll through Instagram, I see bodies that are not normal, also guys and girls, and they just basically work out their whole life and…have strict meal plans,” Mora said. “So it’s like nearly impossible especially for students that go to class until four and have these lunches.”

Haugen also stated that she had done research while working at Facebook that confirmed Instagram’s ability to expose teens to content that could cause eating disorders.

78.2 percent of students say they know someone with an eating disorder

Junior Emily Starks said that eating disorders have been normalized and are not viewed seriously by her peers.

Sometimes it’s so scary how casually people will just be like, ‘Oh, yeah, I have one’,” Starks said.

Student Assistance Counselor Hollie Wilson said that there has been a shift towards more boys talking about their experiences with eating disorders.

“It is predominantly more female based, but we are seeing it and seeing more adolescent males verbalizing their concerns either for the body or the restrictive eating,” Wilson said.

Wilson said many students who have an eating disorder or symptoms of one may not easily seek help.

“They don’t feel it may be something that they can fix, or that they can work on,” Wilson said. “And so they’re hesitant to tell that to somebody for fear that it may not change.” 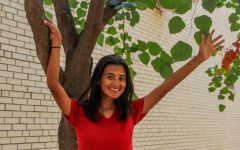