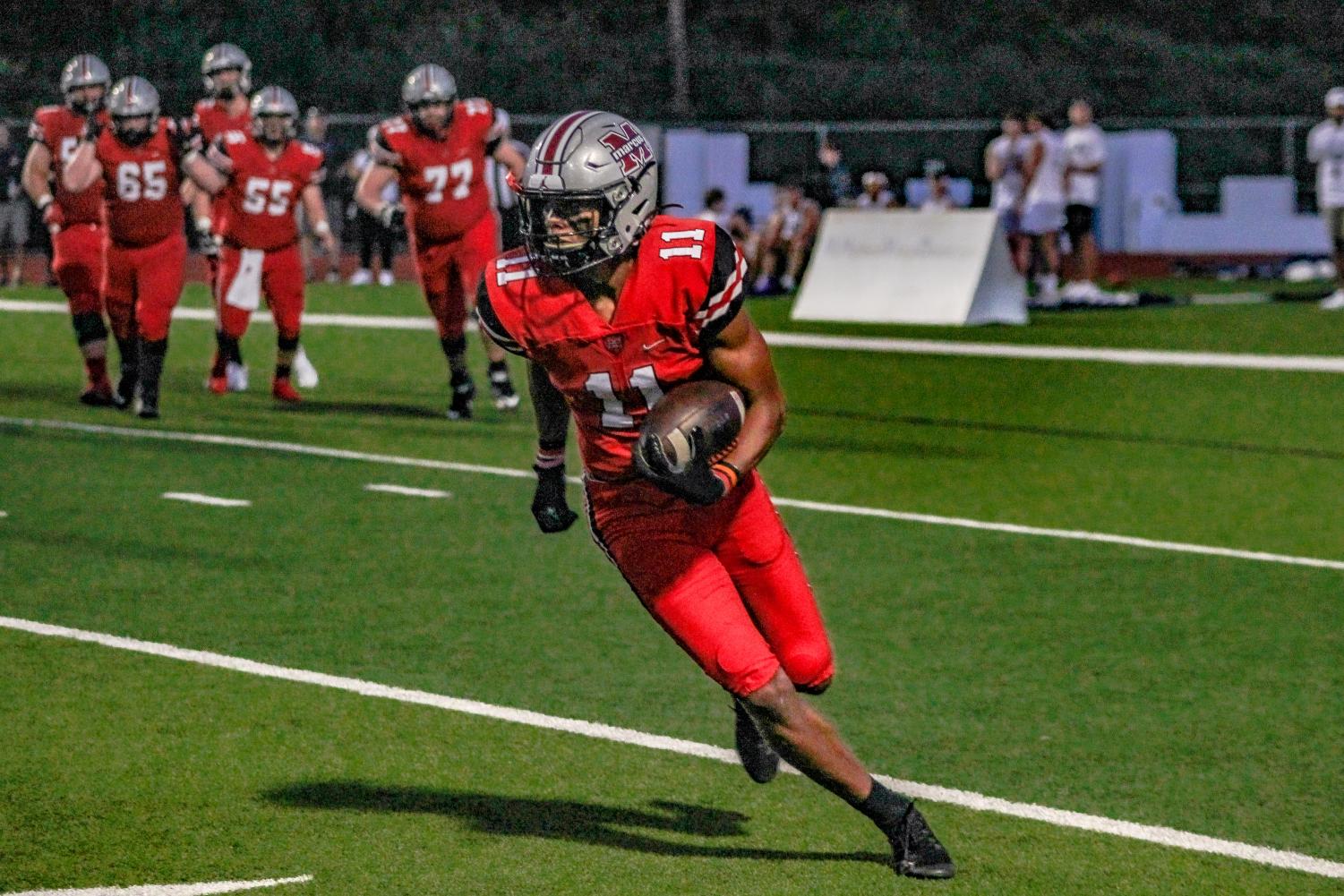 Senior receiver Dallas Dudley carries the ball across the field during the Mound Showdown game on Sept. 24. (Avery Jerina)

Senior receiver Dallas Dudley carries the ball across the field during the Mound Showdown game on Sept. 24.

This season, senior wide receiver Dallas Dudley has made his name known. With 1,153 yards from this season, Dallas has been instrumental to the team’s success. At the last game of the season at Plano East, Dallas had 138 yards which gave him enough to break the school record for most career receiving yards with 2,452. The team still has the postseason to play, so he can keep adding to his new record.

Dallas says that having the record is an honor but at the end of the day just loves playing.

“It’s a big accomplishment for me, especially seeing the guys that have come through here,” Dallas said. “That’s one of the biggest things I love to do here. I love to break records, I love to make some memorable moments and in high school you got to have fun with the game and that’s what I like to go out and do.”

Just in his senior season, Dallas has made multiple highlight plays, including his 4th quarter catch against Flower Mound, when the team was down by 3. Senior quarterback Jaxxon Warren threw it towards the middle of the field with one Jaguar defender in front of him. Dallas jumped high and caught the ball right over the defenders’ fingertips, turned and ran for more yards. He’s made multiple catches against Plano West where he snatched the ball away from defenders like it was nothing. He plays like he was born to do this.

Football is in Dallas’ blood. His uncles played college football, and his dad Rickey Dudley was a former NFL tight end, who played on the Oakland Raiders and Tampa Bay Buccaneers. Rickey said he felt pressure to put Dallas into football almost immediately, but he didn’t want to force the sport onto him. He wanted him to find his own way.

Dallas played only basketball until seventh grade when he told his dad he wanted to play football too.

With all the knowledge from his playing career, Rickey was ready to offer Dallas all the information he could.

“It was one of those things where when you see the kid wants something and you have the knowledge to give to him, you just do it,” Rickey said.

From then on Dallas played both sports, his father helping him improve mentally then physically by watching film of other players.

But Rickey says Dallas is the one who put in the work at the end of the day.

Dallas made the varsity as a sophomore. That season he was ready to show everyone what he could do. However, his life changed when his aunt passed away that year.

Rickey says he’s proud of Dallas turning to football as his way to work through the loss of his aunt.

“You have to use something as a distraction,” Dudley said. “A motivation to keep her memory alive and at the same time continue with your life.”

That season Dallas recorded 46 catches for 665 yards and 4 touchdowns. His first ever touchdown on varsity was in the 2019 Battle of the Axe. That matchup lived up to the intense rivalry as points were scored left and right. Dallas stood on the sidelines as the game was tied up by a Lewisville field goal, making the score 42-42.

On the next drive, Dallas saw quarterback Garrett Nussmeier start running to his right. He jumped up to catch the ball and immediately saw one defender whizz right past him. Another defender dove at his legs, but Dallas stayed in bounds and ran into that endzone.

He saw the entire sideline full of players and coaches rushed onto the field to celebrate with him: the young sophomore who helped win the game.

Dallas says that moment was something he’ll remember forever.

“I knew that’s a once in a lifetime thing, maybe a couple times for some people,” Dallas said. “But it was real good to get a team win overall, just seeing my teammates happy and the fans happy is a feeling like no other.”

That wasn’t the only big play from Dallas that season. As in the first team’s first playoff game against Lake Highlands, Dallas caught a ball right above a defender’s helmet while running down the sideline, setting the team up for their 36-27 win. That play won the DFW Inside High School Sports “Play of the Year.” Thousands of people voted for Dallas’ helmet catch including former NFL players such as Tim Brown, Simeon Rice, Desmond Howard and Eddie George, who all voiced their support on Twitter.

Rickey said it was a remarkable play.

“I still don’t understand how he caught that,” Rickey said. “He’s got a couple of catches that [made me go] ‘that was impressive.’”

Dallas’ recorded similar numbers with 41 catches for 627 yards and 7 touchdowns, but the team was at a whole different level. In 2020 the Marauders had their first undefeated season since 1995. Dallas said that having that type of talent around him made him better.
“I think that’s what made me a better person over the years,” Dallas said. “Just having them around, having great chemistry with the team made me a better player overall.” 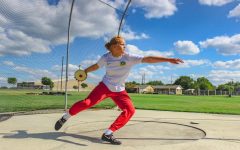 In the offseason, Rickey and Dallas set goals for his senior season such as creating a spark for the team and setting the tempo. By his fourth game of the season he had 600 yards and was the yards leader in all 6A schools.

In his first game against Jesuit, each of his catches built momentum. By the end of the game, he had recorded 9 catches for 199 yards and a touchdown.

“Once I get my groove going, I think there’s no one that can stop me, Dallas said. “When you keep coming to me I think that’s one of the main things that help out the team.”

Senior teammate Zach Morris grew up with Dallas and says he had high expectations for his performance.

“I expected it because I’ve seen it the past two years,” Morris said. “When he was just the slot receiver but now he’s the main guy, so I expected him to do that.”

Dallas’ 100 yards a game streak continued even through the team’s lowest scoring game of the season in the Mound Showdown. The wide receiver recorded a career high 13 catches for 118 yards.

“It’s always fun playing those guys across the street,” Dallas said. “But it’s a tough loss in your senior year, but I knew that our focus was on winning our next games and then district.”

Dallas continued his senior season racking up yards and after 8 games, he had 55 catches for 938 yards.

Rickey knows how hard his son has worked for this and couldn’t be more happy for his success.
“I’m proud, man. Very proud,” Rickey said.

“My biggest motivation has been to continue what he started,” Dallas said. “He’s my biggest inspiration.”

At every game, Dallas’ father has his own pregame routine. He brings his own camera to record so that the two have lots to study later together. Rickey has committed to be here for Dallas through it all. Now at the end, Rickey says it feels great to see where Dallas is now.

“It’s satisfying, gratifying, all the above,” Rickey said. “I don’t think [my sons] will appreciate it until they’re my age and they’ll be able to go back and look back on these tapes.”

This routine has become so normal for Dallas’ father who’s done it for years at this point.

“Now if I don’t have my recorder I don’t feel like I’m game ready,” Rickey said.

“My parents are definitely my ‘why,’” Dallas said. “Every single day I want to make them proud, my family is what inspires me, it’s what makes me want to go out there and do my best so I can one day give everything back to them because of the work they’ve put in for me.”

The Marquee • Copyright 2023 • FLEX WordPress Theme by SNO • Log in