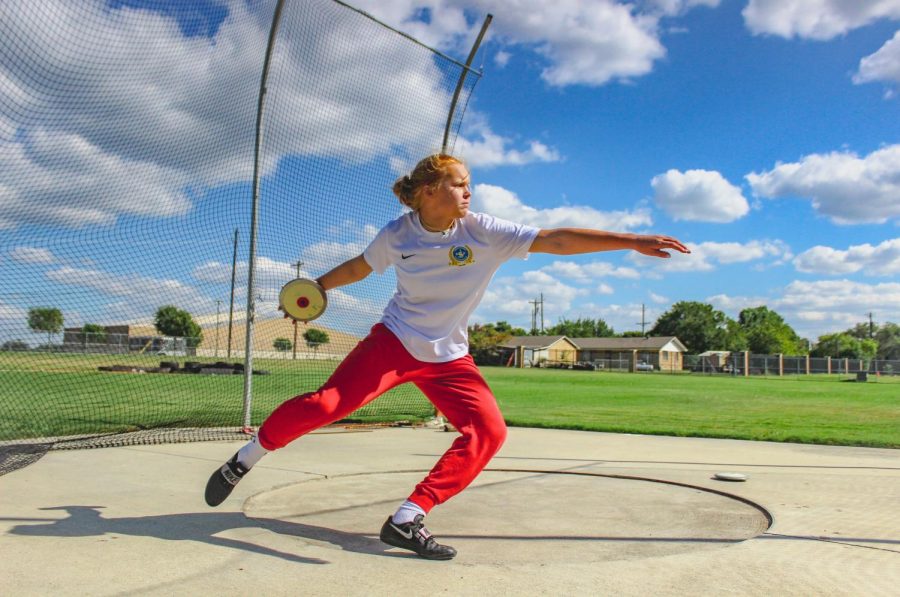 Junior Emma Sralla prepares to throw the discus. She has competed in track events since she was 9.

Junior Emma Sralla stood in the stadium in Tallinn, Estonia. Her eyes darted to the athletes pacing around waiting for their event to start and the coaches instructing on the sidelines. She took a deep breath as she stepped towards the discus ring where her placement in the U20 European championships would be determined. Although Emma was in the country she’d spent her childhood summers, this visit to Sweden felt completely different. It would be the biggest competition of her high school discus career.

In third grade, Emma’s father dragged her to compete in a local high school track meet. Standing at 5 feet 3 inches, she was the same height as a lot of the high schoolers competing, despite being only 9. When she went to the track meet, she quickly realized she stood out.

Although the meet was open to competitors ages 8 and over, she was the youngest to show up. She didn’t want to come, but her dad promised her ice cream. She swung herself effortlessly and launched the discus into the sky. The crowd watched as it landed farther than most of the high schoolers’. She placed third against people twice her age. Afterwards, Emma’s dad took her to get what she really wanted – strawberry ice cream.

Emma has a long history of track competitors in her family. Her great grandfather threw discus in high school, and her older brother holds the men’s record for longest discus throw at Marcus.

Despite her natural throwing talent and family legacy, Emma’s love was basketball. She dreamt of playing in the WNBA.

Because of her height, Emma was a natural fit for the sport.

She played basketball in her driveway every chance she got, whether there was sun, rain or snow. During Christmas break in 7th grade, she practiced in 36 degree, rainy weather. She constantly shot baskets until she had made 800 shots.

“If you ask me how I felt after I shot those 800 shots, I would have told you, it was like heaven,” Emma said. “That was the best thing I could have been doing right at that point.”

Emma had changed from a girl who only went to meets for the ice cream to a teenager craving victory.

Her freshman year, Emma continued playing basketball but that wasn’t enough to satisfy her need for success, so she joined track. She competed in several events, but like her family, she excelled in discus the most.

She constantly trained after school and lifted weights. But the hardest weight for Emma to carry was the physical and mental demands of both sports.

Doing tough cardio in the morning and strength training in the afternoon tired Emma out constantly. Her sophomore year, she had a wake up call.

As Emma was throwing after a long morning basketball practice, she felt off. She was usually upbeat, energetic and ready to tackle both sports.

“I remember throwing and just feeling dead,” Emma said. “Obviously, my distances weren’t very good. My legs were sore because we had just done bleachers that day … I felt sick.”

The pressure that she put on herself outweighed her love for basketball.

She realized that if she wanted to be her best in discus, she had to quit basketball. As Emma looked back on her sophomore season, she knew that this needed to happen.

“This was definitely the biggest turning point in my entire career,” Emma said.

Since she quit basketball, she has focused her energy on discus training and has been competing in meets. Win after win, Emma owned her competition.

Junior and track manager June Kim has watched Emma compete since they met in eighth grade.

She recently saw Emma pace nervously before her turn to throw at the Prosper meet. Kim said that, even being a strong competitor, Emma struggles internally before big meets.

Emma tapped her foot counting as she stared at the ground waiting for her turn to throw. She was trying to empty her head of thoughts and hone in on her goal – a new personal record.

Emma paced before the Prosper meet trying to calm her mind.

“She puts a lot of those pressures on herself,” Kim said. I think she’s done a really good job with making sure that she’s still looking out for herself. And I think I’ve tried to remind her to do that… each setback isn’t ultimately a setback.”

As Emma watched the disc fly, she just knew that this meet had been her best one yet. Emma’s discus coach, Andrew Reinberg, watched on the sidelines.

“When she released it, you could tell. I was like this is going to be a big one,” Reinberg said.

Her distance was announced. She had thrown an outstanding 165”2’ and beaten her personal record.

On June 14 as the family was getting ready to eat dinner, Emma’s brother, Karl Sralla, received an unexpected call from a Swedish thrower. Emma has dual citizenship in Sweden since her mother was born and raised there.

Because of her exceptional throws at track meets, she was well known in the high school discus arena. The caller had invited her to join the Swedish National Team.

The next step was qualifying for the U20 European championships in Tallinn, Estonia. This is the European discus equivalent of the World Series.

“It’s just very special whenever you can compete for a country, and especially a country that is so prolific in throwing,” Emma said.

As July 15 got closer, Emma had to stay mentally and physically prepared for her championship. She was going to be the youngest female competing.

“I kind of just wanted to soak it all in and realize that, hey this is really cool … and I can have as much fun as I can,” Emma said.

At the U20 competition, her scores put her through the first round, and she advanced to the second. She was ten people away from winning the championship. Her phone was flooded with support from family, friends and teammates. But as Emma walked towards the ring focusing her mind was only on one goal – winning.

It’s just very special whenever you can compete for a country, and especially a country that is so prolific in throwing.”

On her final throw, Emma spun herself around as she saw the discus launch into the sky. Her friends and family held their breath as they waited for the distance to be measured. Her throw of 158’2” gave her 11th place out of the top 24 in the U20 division.
“It made me realize that everything I’ve done, and all the moments by myself all led to something bigger than just myself,” Emma said. “And that was like a really cool realization.”

Emma plans on competing again at the European championships in Jerusalem this upcoming summer. This time, she has her eye on making it to the world championships. Setting these overarching goals allow Emma to reach further than she thought possible.
“I think it’s made me so much more ambitious than I would be otherwise,” Emma said. “I think it kind of gives me a reason to wake up sometimes.”