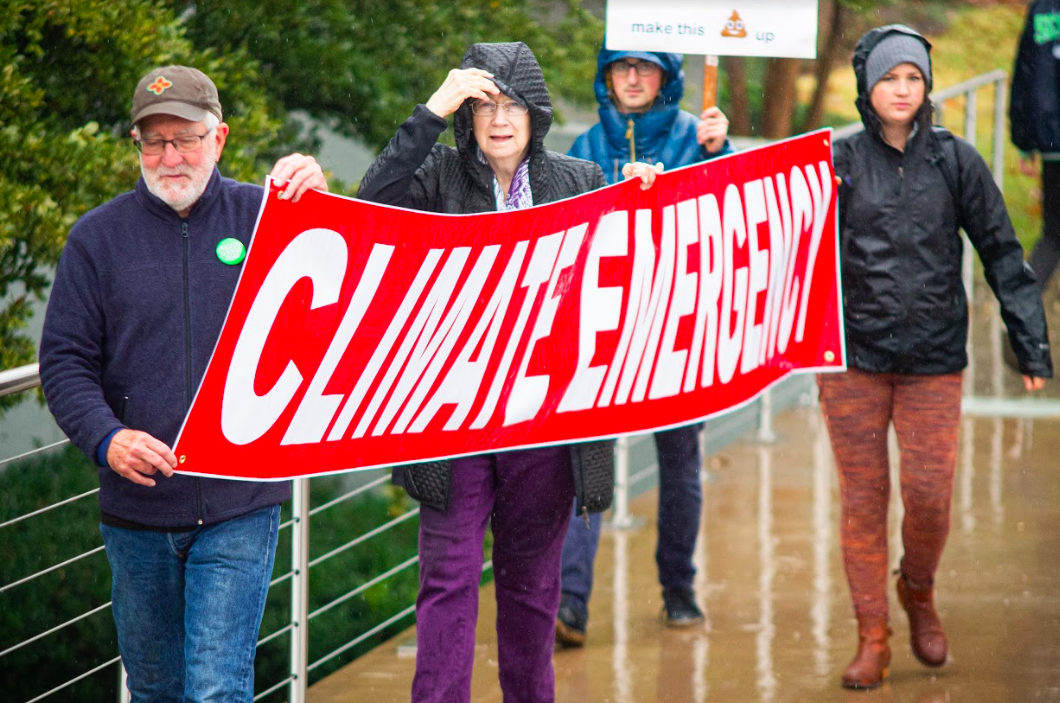 The Global Climate Strike, an environmental conservation organization, held a rally on Friday, Nov. 29 in order to let the government know they want climate action. 40 people attended, brought signs, and marched as a group up and down W. 7th in the rain while shouting chants that encouraged activism. (Emily Lundell)

The Global Climate Strike, an environmental conservation organization, held a rally on Friday, Nov. 29 in order to let the government know they want climate action. 40 people attended, brought signs, and marched as a group up and down W. 7th in the rain while shouting chants that encouraged activism.

According to the United Nations, 2019 is set to end the hottest decade recorded, and natural disasters such as wildfires and floods have increased. The global temperature has increased 1.5 F since 1880, according to the U.S. Global Change Research Program. To address this, U.N. Secretary General Antonio Gutterres made a statement at the U.N. summit on Dec. 2, 2019.

“Do we really want to be remembered as the generation that buried its head in the sand, that fiddled while the planet burned?” Gutterres said.

Throughout October, intense wildfires have been ravaging southern California. Over 200,000 residents have evacuated their homes. Over 2 million people have lost power. The fires have caused over $125 million damage.

California has recorded wildfires since 1878, but 15 out of the 20 deadliest fires occurred after 2000. Around 75,000 acres of land (about one third of Dallas) have already burned in 2019. Last year’s fires burned even more, destroying 600,000 acres (about the size of Dallas and Los Angeles combined).

The wildfires in California partially stem from power lines, but experts also believe they are caused by climate change, which is affecting the state at an accelerated pace. According to National Geographic, California has warmed by 3 degrees Fahrenheit over the past century, which is three times more than the global average of 1 degree.

July of 2019 was the third hottest month in global history. This increase in average air temperature sucks the water out of plants and soils, making them drier and easier to burn. Therefore, fires can spread across thousands of acres rapidly. Many scientists have stressed that the rise in global temperatures have caused serious concern and encourage urgent action.

The lack of climate change action by the national administration has received criticism from many scientists.

“Many scientists have spent years collecting information about the effect of human actions on the climate,” anthropologist Jane Goodall said in a speech. “There’s no question that the climate is changing, I’ve seen it all over the world. And the fact that people can deny that humans have influenced this change in climate is quite frankly absurd.”

Students also believe the fires in California are something that must be addressed immediately.

“I think immediate action should be taken to put out the fires because if I were living there, I would be scared for my home and my family and my friends,” senior Emily Bullock said.

Teens speak up on climate change

This year, young climate activists have become more outspoken. Greta Thunberg, a teenage advocate from Sweden, recently made headlines worldwide when she sailed from Sweden to New York City in a boat that produced zero carbon emissions. Thunberg also gave a speech at the United Nations, where she called on world leaders to take action for climate change. This week, Time Magazine announced her as their Person of the Year.

“People are suffering. People are dying. Entire ecosystems are collapsing. We are in the beginning of a mass extinction,” Thunberg said in the speech.

She also led climate strikes worldwide and started the movement Fridays for Future. As part of the movement, students walk out of their schools to bring awareness to the climate crisis.

Mari Copeny, also known as Little Miss Flint, is a twelve year old climate activist from Flint, Michigan. She wrote to President Obama about the water crisis in her city, which helped bring national attention to the Flint water crisis and convinced Obama to send $100 million in federal aid.

She has been actively involved in climate movements this year.

“No, our fight to save the planet didn’t start today with the #ClimateStrike and it doesn’t end today either,” Copeny tweeted. “Many of us have been putting in the work for years to save our planet. Don’t just amplify our voices today, but every day and support our solutions to save us.”

“I think that activism is important,” Leaumont said. “We need to be educated to combat climate change. We can’t just say ‘fix climate change’ and expect to find a solution waiting for us. We have to make our own solution.”

Democrats have proposed the Green New Deal to encourage clean energy and limit dependence on fossil fuels. The bill addresses  climate change by encouraging a 100 percent shift to clean energy by 2030. Businesses that follow Green New Deal standards will be provided low-interest loans.

In early 2019, the Green New Deal was sent to Congress. However, the bill failed to advance in the Senate.

Republicans take issue with the Green New Deal because it will require trillions of dollars. Traditionally, Republicans are concerned about spending taxpayer money on renewable energy. However, young Republicans are beginning to break away from these beliefs. A November Pew Research survey showed that more than half of adult Republicans under 38 believe that the government should be doing more to reduce the effects of climate change.

Students have varying opinions on whether the Green New Deal should be passed.

“I think the Green New Deal is a bad idea to try and solve the issues such as climate change because destroying the economy, in the process, would cause a ton of other issues,” Fredricks said.

Senior Katelyn Harvey understands both sides of the spectrum.

“I think it’s a good idea in theory, and action should definitely be taken to end climate change, but I don’t know if it’s a good plan because of how people would react to the heavy price tag,” Harvey said.

In November, President Donald Trump pulled the U.S. out of the Paris Climate Accords. The other two countries not in the agreement are Syria, in ruins after a civil war, and Nicaragua.

In 2016, 197 countries have joined this agreement to strengthen the global response to the threat of climate change by reducing the emission of gases. The agreement stated that by the end of the century, the rise in global temperature should remain well under 2 C. However, since 1880, the global temperature has increased 1.5 F, according to the U.S. Global Change Research Program.

Though the federal government has pulled out of the agreement, 400 mayors representing 70 million Americans across the country have agreed to comply with the Paris Agreement. Dallas is one of these cities.

Locally, Dallas has made efforts to meet the Paris Agreement emission reduction targets.  The city has reduced 4 million tons of carbon emissions by relying more on renewable and alternative sources of energy.