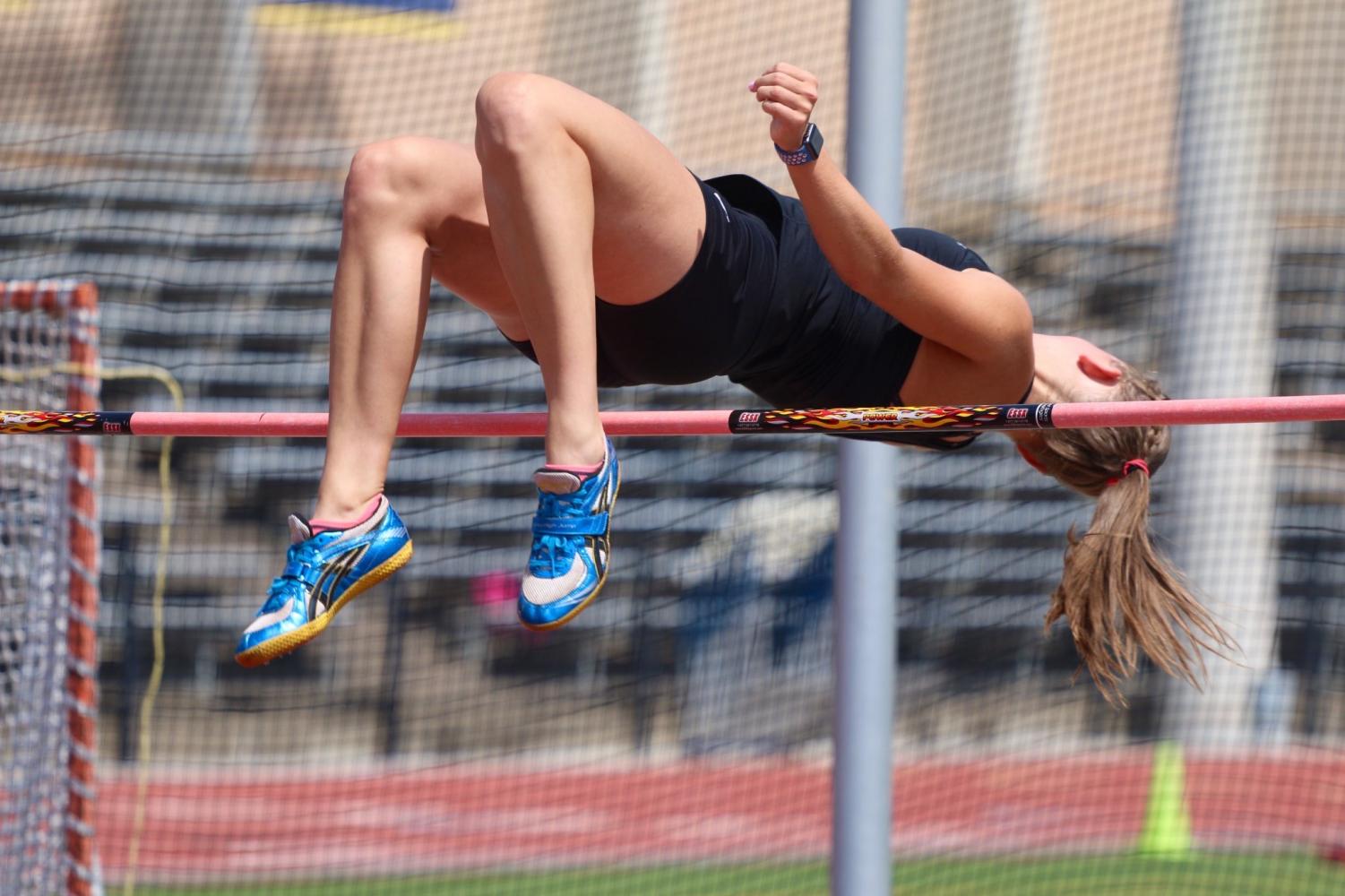 Tears streamed down senior Maddie Meiner’s face as she ran. She was 8 years old and all she had to run was a single lap, but the distance left seemed so much longer. This wasn’t her first track meet, but she hadn’t been competing for long. Her sprint slowed to a run, which slowed to a jog. Tears welled up in her eyes.

Then her legs stopped moving entirely.

As the other kids ran past, they left her standing alone at the halfway point of the race.

Meiner had been running track since she was 6. Her parents, both college level track athletes, encouraged her to compete. She started competing in meets at 7 with the Texas Ameteur Athletic Federation. She spent her summers training and her weekends racing on high school tracks.

But at that moment, the distance ahead of her was too much. She would’ve done anything else. She would’ve rather run the 50, 100 or even the 200 meter dash. Just not the 400.

“I liked track, just eight-year-old Maddie did not want to run that whole lap,” Meiner said.

As she scanned the crowd of parents behind the waist-high fence that circled the track, she found her parents, who were cheering for her to start running again.

The pack of kids was already 200 meters ahead of her celebrating their wins, their parents hugging and congratulating them.

She could’ve quit so easily. She could’ve walked off the track, cut across the grass and gave up on the race.

But that wasn’t Meiner. She wiped the tears out of her eyes and started to jog, finishing the race dead last.

Schools had come from all over the district to compete in the 2018-2019 Marauder Invitational, the last regular season meet.

Meiner began competing around 7 a.m. with shot put. After two more events she only had the 100 and 300 meter hurdles left.

I think I was more mentally tired. When I went down at the Marcus Invitational, I thought my season was over.”

As Meiner was running the 100 meter hurdle she felt a stabbing pain in her leg. She had strained her hamstring and collapsed on the track.

Thoughts ran through her head as she laid on the track.

Was her season over?

Would she ever compete again?

After gathering her bearings she picked herself up and limped to assistant coach Andrew Reinberg.

Reinberg helped Meiner stand and reassured her that she was going to be fine and that she would be OK by district.

“There wasn’t any ‘We will see what happens,’ it was always ‘You’re going to be fine,’” Meiner said.

She spent the next week cutting back on practice and rehabilitating her leg. When she finally made it to the district meet, she had started to recover but she was still nervous about her injury.

Twelve hours of competition later and her leg didn’t stop her at all. She ended up qualifying for the area competition for all four of her events.

While running the area 100 meter dash, Meiner felt the stabbing pain in her leg again.

She knew her injury was back.

Meiner kept running despite the pain. The throbbing pain in her leg didn’t cause her to collapse this time, and she ended up finishing in first. As she crossed the finish line, tears streamed down her face. She went from fearing her season would be over to winning first in area. Combining the pain in her leg with the emotional whiplash, Meiner was exhausted.

She had to give up competing in the 300 meter race because she and the coaches both knew it wouldn’t help her strained hamstring.

“I think I was more mentally tired. When I went down at the Marcus Invitational, I thought my season was over,” Meiner said.

The next week, Meiner competed at the regional meet in high jump. Her mind and body were exhausted. All she had to do was make the same jump she had made at every single meet that year.

She ran horizontally to the mat, lifted herself and hit the pole. As her back connected with the landing pad she knew she had lost. She wouldn’t be going to state. She rolled off the pad and Reinberg held her as she cried.

“He had seen how hard I had worked all season, how much I wanted it,” Meiner said. “I felt like he understood how I was feeling.”

Her sights had been set on state all year and that dream was gone.

After joining the varsity team her freshman year and breaking numerous records, Meiner began this year’s season 20 points away from being the highest scoring track athlete in school history.

“It’s about scoring points for your team,” Meiner said. “If I can score points for my team in all five events, I’m going to do it.”

I think that everything happens for a reason. I learned valuable lessons in my track career and I want to keep those lessons going forward.”

This record didn’t matter to her as much as her main goal — state.

Meiner had her sights set on state this year while helping her team as much as possible. She wanted to go as far as possible in all five of her events — shot put, high jump, long jump and 100 and 300 meter hurdles.

At the second meet of the season on Feb. 29 at Coppell High School, Meiner became the highest scoring track athlete in school history. Winning first place in high jump pushed her over with ten points.

It was only when the coaches told her that she realized what had happened, because it wasn’t her goal for this year. Her goal was state. At midnight when the busses brought them back to school they were all exhausted. They waved goodbye as they got in their cars saying they would see each other at school tomorrow.

Two weeks later, the Hebron Hawk meet was rained out so they sat in the cafeteria for their track period, but something else was on everyone’s mind. Coronavirus. Head coach Steve Telaneus stood on the stage telling the athletes about how things were up in the air and how they should keep practicing.

After he spoke the seniors sat down together at a lunch table. Sharing stories, shedding tears and telling each other how much they would miss track with each other.

Weeks later when Meiner found out track was suspended she was hurt. She had been running track since she was 6 and on the school’s track team all four years of high school. When she didn’t make it to the state level she made that her goal for her senior year. Now because of things out of her control this opportunity was taken away from her.

“The first thought was why did this have to happen during my senior year but at the end of the day there’s other people being affected way worse than a track season coming to an end,” Meiner said.

“I think that everything happens for a reason. I learned valuable lessons in my track career and I want to keep those lessons going forward,” Meiner said.