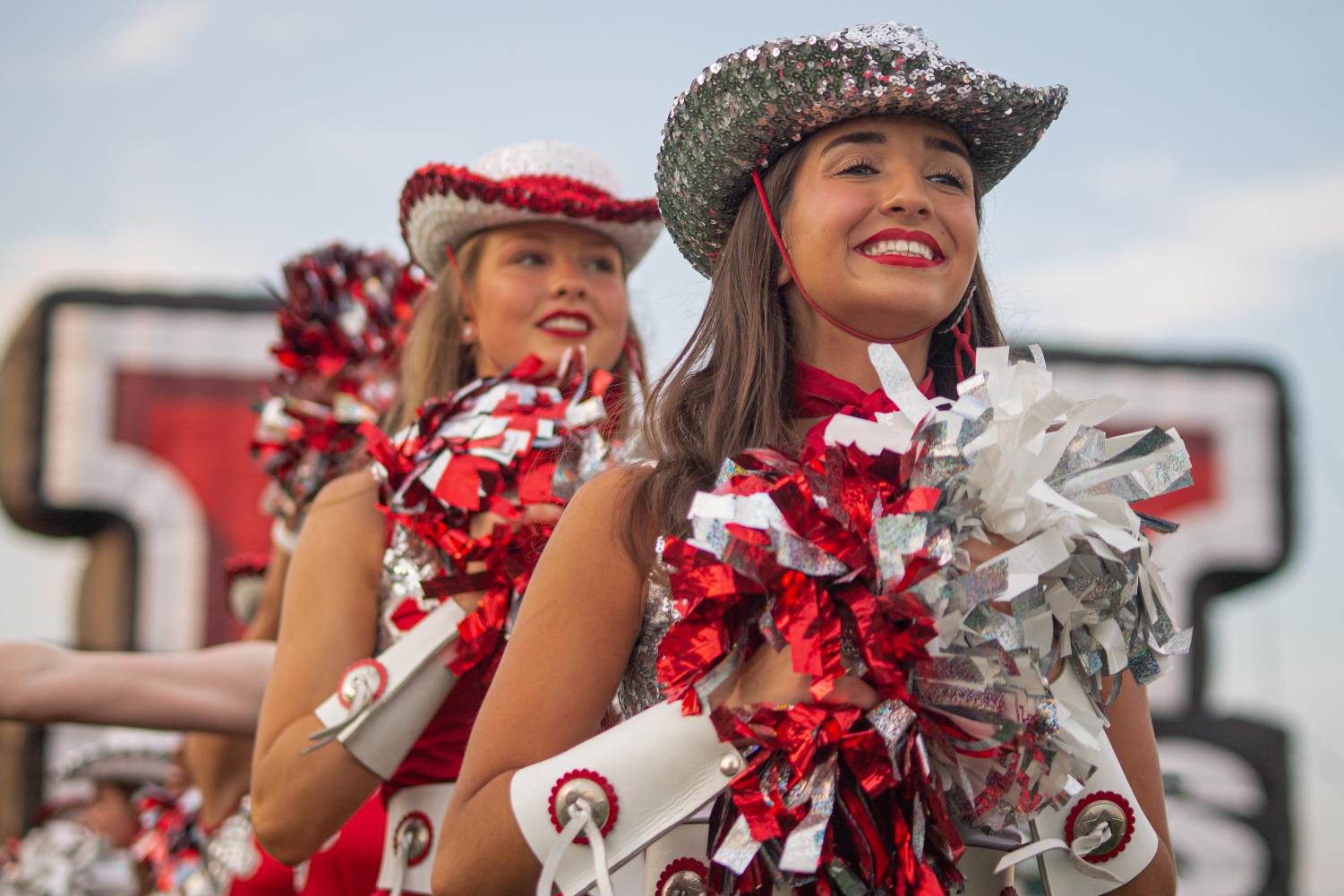 Senior Marquette officer Bella Fortino leads her line onto the field to greet the players at the start of the Sept. 13 football game. The Marquettes recently decided to postpone their annual spring show and auditions in response to COVID-19. (Emily Lundell)

Senior Marquette officer Bella Fortino leads her line onto the field to greet the players at the start of the Sept. 13 football game. The Marquettes recently decided to postpone their annual spring show and auditions in response to COVID-19.

The Marquettes are one of the many groups on campus that have had to cancel their spring activities, including their auditions for next year’s team. The tryouts were originally going to be held on April 7, but the group is hoping to reschedule them for a later date.

“You have a picture in your head of what it’s going to be for all these years and then all of a sudden, this weird virus changes everything,” head director Alice Dack said. “So it’s a difficult situation for everybody.”

The drill team followed the lead of LISD when making their decision. The district released a statement on March 31 announcing that all schools will remain closed through May 1.

“We didn’t really have a choice,” Dack said. “I think that was the hard part.”

However, on April 24, Dack will be meeting with LISD fine arts director Amanda Drinkwater and the directors for the other drill teams in the district to discuss new plans for the auditions.

“We didn’t want to just say, ‘No, we’re not going to have tryouts and we’ll just skip it this year.’ I don’t think that would be fair to these incoming rookies,” Dack said. “It’s not their fault this is when COVID hit… so we’re just exploring our options and wanted to give ourselves a little more time to create the best plan for everybody.”

Dack was expecting about 40 students, including sophomore Sophia Craig, to show up to the auditions before they were postponed. Craig said that she thinks the students planning on trying out are all a little nervous about what LISD will decide later this month.

“I thought about 100 different ways they could do it,” Craig said. “Online tryouts might be the best option, but at the same time half of us don’t really have a space to dance, so it’d be kind of a hassle, but I don’t really know that there’s any way around it.”

Craig is in the drill team prep class and takes weekly classes at The Dance Space. However, once the school and her dance studio closed due to COVID-19, Craig began to devote more time to stretching at home and dancing in her garage to prepare for the tryouts.

“It’s really stressful because it’s already mentally and emotionally draining thinking about tryout week… but especially right now because there’s not really a sense of order in anything,” Craig said.

The canceled auditions also included those for the junior and senior Marquette officer positions. Junior lieutenant Tristan Finn, who has been on the team since her freshman year, was planning on trying out to be a senior officer.

“It’s a little concerning not only for me, but I know for other candidates that are just wanting to be a regular Marquette,” Finn said. “The candidates who haven’t gone through this process before aren’t going to be able to experience what it would normally be like, and I think that’s putting a lot of pressure and stress on them.”

According to Dack, postponing the auditions will likely give the Marquettes less time to prepare for next year.

“Ordering new things like hats and boots, getting measurements for uniforms, all of those things are being postponed, which could impact the beginning of the semester next school year,” Dack said. “But at that point I think we’ll just all be so happy to be back together that we’re not going to be worried about if our hats haven’t come in yet.”

However, Dack believes that postponing the annual spring show was more difficult for most current team members. It was originally scheduled for March 26 — 28.

“I think they’re more sad and disappointed in not being able to have their spring show at this point and our hope is to still put that production on in some form or fashion in the future,” Dack said.

To senior Marquette captain Tatum Hines, the spring show is their turn in the spotlight, giving the team a chance to celebrate their hard work. She said that they begin learning dances for the show as early as October and practice them all year with various choreographers.

The Marquettes also celebrate their seniors during the show, and Hines believes that the obstacles the team has faced due to COVID-19 will make it even more special for her.

“We still got to do it no matter the circumstances,” Hines said. “Drill team girls persevere and we always get through this, and we always have a positive outlook on life.”

Dack hopes that the Marquettes will grow as a team and as individuals from this experience.

“I have been very sad and disappointed as well, but it will be worth it and we will get through this,” Dack said. “Years from now we’ll all look back and be thankful for the lessons and the life opportunities that this experience has shared with all of us.”