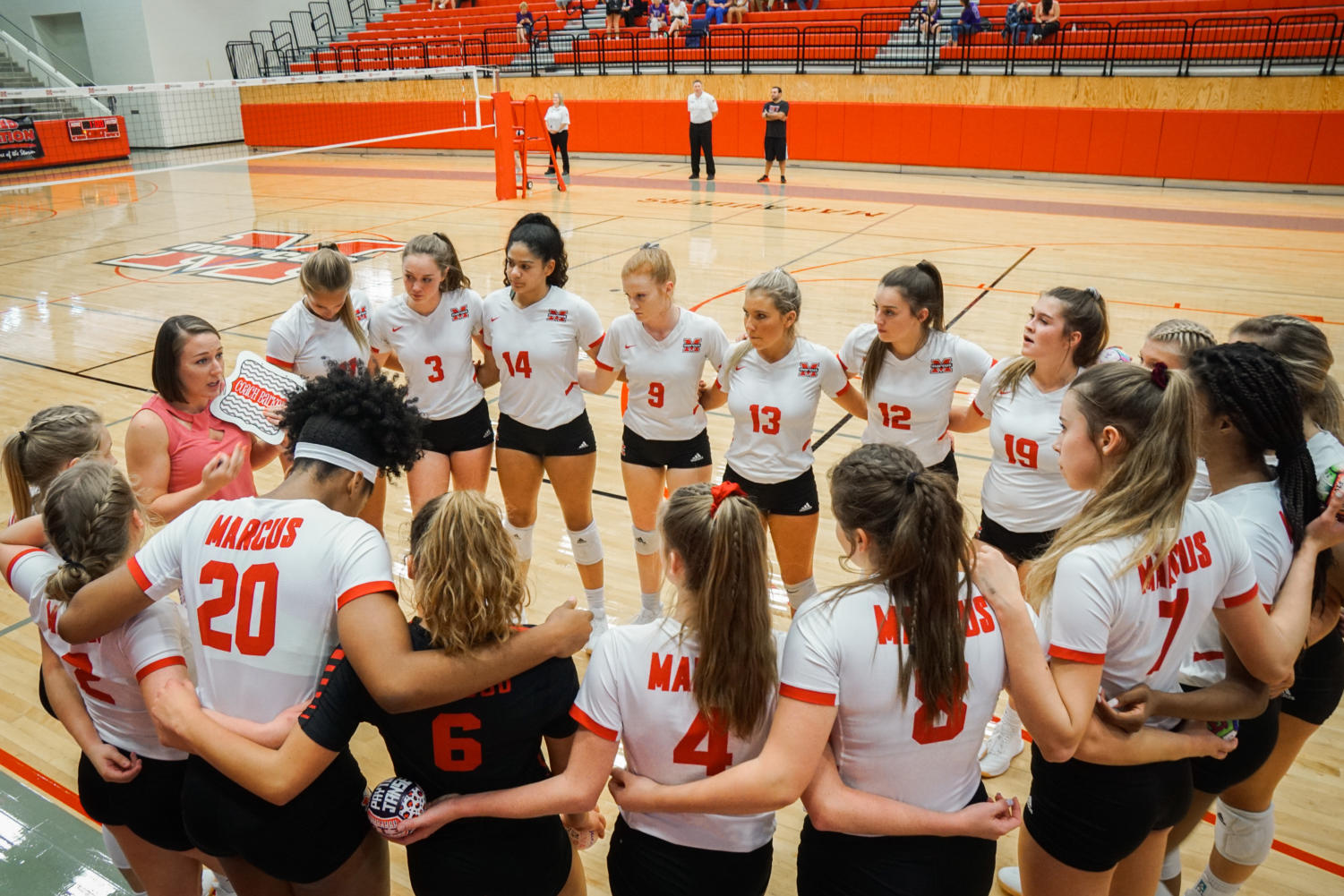 Before the start of the game coach Barker encourages the players to do their best during a team huddle. This is Barker’s fourth year coaching at the school. (Kaitlyn Hughes )

Before the start of the game coach Barker encourages the players to do their best during a team huddle. This is Barker’s fourth year coaching at the school.

The girls varsity volleyball team faced off against Lewisville on Sept. 13. After every rally the girls quickly huddled on the court, either to congratulate their teammates on the great play or reassure each other about their mistakes. Whenever a player was subbed out, she travelled along the row of her teammates to her seat while other players offered a high five and a word of encouragement.

All this energy paid off as the girls beat the Farmers, shutting them out by winning three sets against Lewisville’s zero.

While the team has performed well in their season, with their record as of press time being 19 wins and 10 losses, many of the players are on varsity for the first time. This year, the girls had only six members of their varsity team return from last season.

“It’s not that often you have that many seniors [leave],” head volleyball coach Danielle Barker said. “They graduate then your team is practically brand new.”

With only six returning on a team of 17, the coaches were forced to focus on rebuilding the bonds within the team.

“The teams that are closer off the court are always much better on the court,” Barker said. “Especially in a game that’s so fast paced. You don’t have time to talk it through you just have to react and know where someone is and trust that they’re going to be there.”

According to Barker, North Texas is a highly competitive region for volleyball, so the team must work hard to stay on their toes and ensure victory.

“In this district with these teams being average is not good enough, so they are forced to come in and work hard every day to beat those teams,” Barker said. “So there are definitely rivalries but I’d rather have it this way than fall asleep every Tuesday.”

However, this competition is not confined to other teams.

“Seventeen is a really big team for volleyball when there’s only six spots on the court,” senior Riley Vaughn said. “So competitiveness gets really high.”

To reduce the tension between athletes the coaches have taken steps to encourage a more bonded team.

Over the summer during an away trip to Austin for a tournament, the coaches took away the girls’ phones and encouraged family dinners. They also took the girls to Main Event where they broke into teams for friendly competition.

“Whenever we’re friends outside the court, it’s easier to support each other on the court,” Vaughn said .

The success of coaches bonding efforts are not only recognized by the returning athletes like Vaughn, but the new team members as well.

It’s definitely hard for us, because we were lacking the leader role because so many people graduated, but definitely the seniors this year have taken on the role very well,” junior Abby Atkinson said .

The girls are over halfway finished with their season, but district play has just begun with their opener against Lewisville. The girls have some big games ahead.