Editor’s note: This story was part of an in-depth package of our Feb. 12, 2021 issue, which won first place for print in depth news/feature package in the ILPC contest. It was a finalist for series/project in the Dallas Morning News high school journalism contest. This story also won honorable mention for print in-depth news/feature stories in the 2022 TAJE Best in Texas contest.

UNT alumni Gabby De Lima Rosa, who did research on LGBTQ+ students in Texas schools, said that members of the younger generation are also more likely to come out before they go to college.

“I would say, definitely formative years of schooling, so before they even go to college, more kids are coming out than ever before,” De Lima Rosa said.

UNT professor Jara Carrington teaches various classes that fall under an LGBT studies minor at the university. She agrees that many kids are beginning to feel like they’re being misgendered or are in the wrong body at a younger age.

“They can tell you that something hurts and it hurts to be feeling like you’re not in the right space or people aren’t treating you the way that you would like for them to,” Carrington said.

There has been a notable increase in LGBTQ+ acceptance in recent years. According to the Pew Research Center, 51 percent of Americans believed that homosexuality should be accepted by society in 2002. That number increased to 72 percent by 2019.

Senior Hayden Patrick believes that Americans should accept others and hopes to see the percentage increase even more in the future.

“I think we all just need to keep in mind that we’re all different people, and that’s the great thing in life,” Patrick said.

UNT alumni Gabby De Lima Rosa believes that this greater understanding of the community, both by society and by the legal system, has played a role in the increase in young LGBTQ+ community members.

“If you think about Baby Boomers, your grandparents’ generation, and then the generation before, there was always open persecution against LGBT people,” De Lima Rosa said. “So even if you were, you didn’t want to talk about it.”

According to De Lima Rosa, teens today are seeing changes in LGBTQ+ acceptance in real time, often becoming leaders in the fight for equality. Although slower, adults seem to be becoming open to the LGBTQ+ community as well, as seen in recent elections.

Many teens celebrated when same sex marriage was legalized in 2015. Five years later, a historic Supreme Court decision that said workers could not be fired for being gay or transgender dominated headlines and caught the attention of the younger generation. Most recently, LGBTQ+ teens watched as Secretary of Transportation Pete Buttigieg was sworn in on Feb. 3, making him the first openly gay Cabinet member.

“They’re understanding that the status quo is no longer as strong as it used to be,” De Lima Rosa said. “That there’s a lot of opportunity for change.”

UNT professor Jara Carrington, who has been teaching for four years and graduated from UNT, said that students are more comfortable identifying as LGBTQ+ than they were when she was going to school.

“I would say that I see people more comfortable expressing their gender and their sexuality in different kinds of ways around campus, just generally speaking,” Carrington said. “So you see lots of people kind of gender nonconforming walking around or people holding hands.”

The instance on the UNT campus is a small part of a broad cultural shift. Carrington said that in addition to a change in gender roles in the past few decades, many parents and peers are more open to having conversations about being LGBTQ+ with kids.

“I think all of those things together just kind of make it a safer cultural moment to kind of come out,” Carrington said.

There has also been increased LGBTQ+ representation in the media. According to GLAAD, out of the 110 films counted in 2018, 18.2 percent contained LGBTQ characters, a 5.4 percent increase compared to the previous year.

According to UNT alumni Gabby De Lima Rosa, a major step was the release of “Love, Simon” in 2018.

“You can see the power of representation in media very clearly with how ‘Black Panther’ and ‘Wonder Woman’ were so important to so many people when they came out,” De Lima Rosa said. “The same thing with ‘Love, Simon’, when that came out, it was a big deal.”

Representation has also increased in pop culture. Singer Jojo Siwa went viral after she came out as LGBTQ+ on Jan. 20. Siwa posted a TikTok lip-sync video to Lady Gaga’s “Born This Way.”

Junior Sydney Benson believes that Siwa coming out will help normalize being LGBTQ+, especially since her audience is mostly kids.

“All it does is help people realize, ‘Oh, queer people, gay and trans people are literally just normal people,’” Benson said. “…She’s really just a regular kid who happens to have a platform and go on tours and all this. Her being potentially gay or bi or whatever does not change any of that.”

Although LGBTQ+ acceptance has increased in recent years, students still face difficulties. In a 2019 study by the Pew Research Center, 28 percent of Americans did not believe that homosexuality should be accepted.

The same year, the Southern Poverty Law Center reported that the number of anti-LGBTQ hate groups increased by nearly 43 percent and remained stable in 2020.

The SPLC identified these groups as any “organization that… has beliefs or practices that attack or malign an entire class of people.” Anti-LGBTQ groups were further specified to verbally and physically attack members of the LGBTQ+ community, as well as spread false propaganda.

I feel like we live right now in a state where it’s okay to be casually homophobic.”

Junior Sydney Benson believes that homophobia is tolerated to some degree.

“I look back when I was a kid, and it’s so ingrained to be homophobic, to be transphobic,” Benson said. “I feel like we live right now in a state where it’s okay to be casually homophobic.”

This can also be seen in schools. In 2017, the Gay, Lesbian and Straight Education Network reported that 70.1 percent of LGBTQ+ students experienced verbal harassment at school because of their sexual orientation, while 28.9 percent were physically harassed.

UNT alumni Gabby De Lima Rosa wrote her thesis about how K-12 educators in Texas interpret and implement policies that directly affect LGBTQ+ students. During her research, she found bullying to be a major issue.

“Why you hear a lot of bullying against LGBT people… in Texas, is that they don’t really fit into the mold that has been created and put into place to keep America the way that it is,” De Lima Rosa said. “To keep American society thriving and keep that heteronormativity.”

In the same study, the GLSEN reported that 59.5 percent of LGBTQ+ students felt unsafe at school because of their sexual orientation. The survey also found that 34.8 percent of those students missed at least one day of school in the past month because of this. 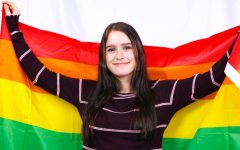 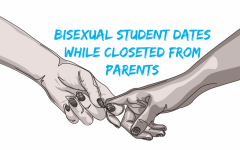 LISD’s local policy regarding bullying states that prohibited conduct includes “harassment or discrimination on the basis of race, color, religion, sex, gender, national origin, or disability.” Although the bullying policy does not specifically mention sexual orientation, the student handbook prefaces a list of examples of gender-based harassment by stating it is “regardless of the student’s or the harasser’s actual or perceived sexual orientation or gender identity.”

Assistant Principal Kyle Smith said that all bullying on campus, including any on the basis of sexual orientation, is not tolerated.

“We want everybody to be treated fairly and respectfully and if they can’t be treated that way, then it has to be dealt with in a disciplined manner,” Smith said. “If they’re being bullied or harassed or something like that, then administration would get involved and then handle it appropriately.”

Although homophobia can be difficult to deal with, De Lima Rosa believes that there is a better future for the LGBTQ+ community.

“I think we’re going toward a direction where more people are going to have more rights,” De Lima Rosa said. “That’s why we see so much backlash.”