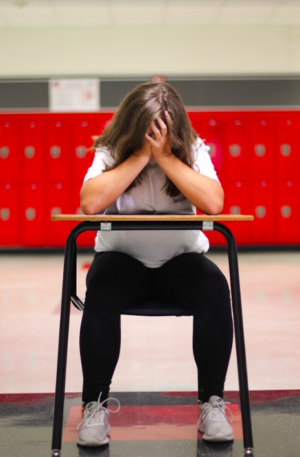 Kaitlyn Hughes
Many students face stress daily, which can come from a variety of factors.

Many students face pressure in their homes, whether it be from the expectations of parents or comparing themselves to siblings. 39 percent* of students on campus report feeling pressure from their family very often.

Junior Neha Yawalkar said that her parents are supportive and want her to do well in school. However, she sees parental expectations cause stress in her friends.

“I know a lot of my other friends, they have parents who have very strict expectations for them and if they don’t get an A or something like that, that’s a really harmful thing,” Yawalkar said.

Yawalkar does compares herself to her successful cousin, who went to Cornell University. Although she’s learned how to have balance in her life, Yawalkar said that this can induce stress.

“There’s a lot of parallels between me and her, and so I’ve always just been thinking ‘if she can do that, I should be able to, too,’” Yawalkar said. “I know it’s not always the healthiest thing to do, but it’s just something that has been pushing me to work hard.”

Having too much to do and not enough time is a common problem that many students say they face. Whether it’s participating in extracurriculars or volunteering for clubs, students often can’t equally dedicate themselves to all of their interests. Many students also work towards getting good grades to qualify for certain organization and some students try to be a part of as many clubs and organizations as possible so they can add it to their college applications.

“I’m trying to do that to offset whatever bad academic decisions I’ve made,” Cherry said. “That kind of stinks that I feel the need to do that.”

“In general, I just don’t have time to do everything in my life and sleep for eight hours,” Yawalkar said. “But, I think when things are stressful and they’re becoming overwhelming, the fact that I’m also not getting sleep, that can make everything seem a lot worse.”

A lot of students struggle to find a balance between having fun and the activities they’re involved in to get another line on their transcript.

“Do I bend over backwards trying to do all of the things that I should do in order to get in somewhere or get money for somewhere, or do I cut back on it and enjoy my four years, and then maybe regret it later when I don’t have as many opportunities?” Cherry said.

It’s getting harder and harder to not feel like the weight of the world is on your shoulders.”

“It’s getting harder and harder to not feel like the weight of the world is on your shoulders,” Cherry said.

“I think that it’s kind of interesting to think about what college you want to go to when you’re in middle school, but I don’t think that it should be as stressful as it was,” Cherry said. “Taking Algebra 1 in eighth grade, and being like, ‘this is going to go on my transcript.’ That’s iffy.”

Others feel that by including these lesson plans, students are able to consider their options years in advance to better prepare for their futures.

“I understand that it’s important to think about college when you’re in high school, but I feel like if, from the get go, all of the options were equally promoted to kids, it wouldn’t feel so overbearing,” Yawalkar said.

As access to technology has increased, students have become more involved online, especially with social media. Platforms, such as Instagram and Twitter, have created a compulsion to compare lives’. 58 percent* of students report comparing themselves to others very often.

“I can see that for people who value their social media platforms a lot, there’s a lot of stress behind what to caption it, what pictures to put, how good you look,” Yawalkar said.  “There’s a lot of thought that goes into every post and that can definitely be stressful.”

Most of the time, students only post the good side of their life and try to look perfect.

“Your main Instagram is always going to be the best version of yourself and it’s very easy to compare,” Cherry said. “Obviously, sitting on your couch scrolling through your feed, that’s not going to be a fair comparison but you can’t help but draw to it.”

*From a poll of 300 students conducted by The Marquee

Get plenty of sleep

One of the most common symptoms of stress is sleep problems. A full night’s sleep helps better prepare you for the day ahead, and setting up a healthy sleep schedule has been proven to decrease stress. Teenagers need at least 8-10 hours of sleep each night to function properly the next day, but it has also been shown that one 30 minute nap during the day can quickly help your body recharge after a long day.

Food can help tame stress in several ways. Fruits and vegetables containing high amounts of magnesium and potassium help combat headaches, fatigue and high blood pressure, which are common effects of stress. However, when eaten in limited quantities, less healthy comfort foods, such as carbs or sugars, can also boost levels of serotonin, a brain chemical that regulates mood. 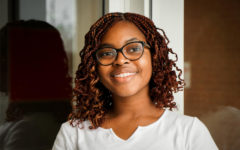 Physical activity can reduce fatigue and improve alertness and cognitive function, which can be beneficial after stress has exhausted your body’s energy. Running, biking and playing a sport can all help combat stress. A daily walk or a five minute aerobic exercise can also help repair your body’s physical and mental state.

If certain class work, social media or news events are causing you stress, step back for a bit and focus on other things. Whether it’s listening to music, watching your favorite movie with friends or curling up with a good book, finding an activity that helps you decompress will calm your thoughts and ease your mind.

Sharing your problems with others is a great way to release bottled up emotions. Having a conversation with a parent, friend, doctor or counselor not only helps you be able to come to terms with your own feelings, but also allows for discussions on how to manage your stress and recognize if you need help.