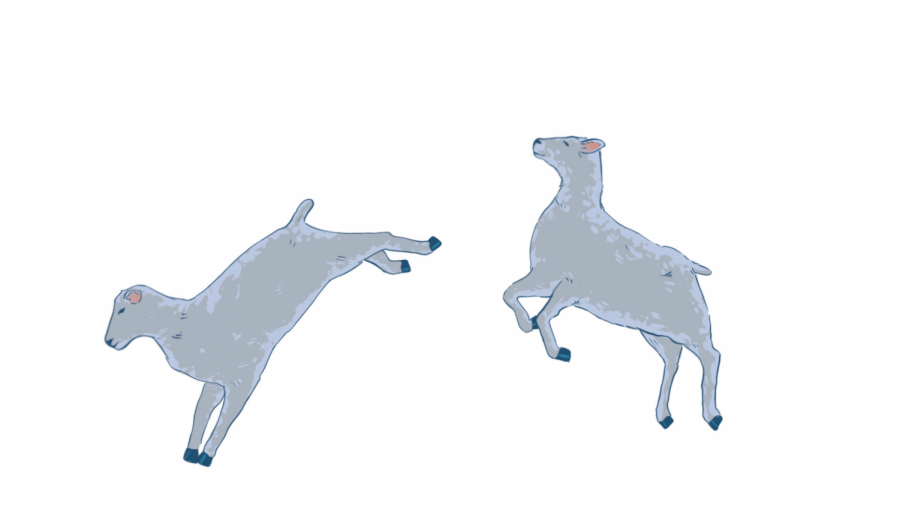 School, extracurriculars and other factors keep students and staff up at night.

Senior Alyssa Mercano rolls over and turns off her alarm. Since she studied late and only got two hours of sleep, she’s tempted to hit the snooze button. But it’s an hour drive to school. Reluctantly, starts her day.

After coffee, she climbs into her car. The caffeine is the only thing that keeps her awake as she heads down the freeway. While driving, she mentally goes over the notes from the previous night for her Dual Credit Physiology test.

“I think the dual credit class gives me the most homework. I have maybe six hours of sleep if I don’t have any homework,” Alyssa said. “But the more homework I do have…I have no choice but to lose sleep to catch up on school.”

Alyssa also has homework from most of her classes most days.

“I have something to do every single day, no matter what,” Alyssa said.

Alyssa’s obstacles from sleep are not just schoolwork. To provide for her family which includes a new baby, Alyssa works full-time at Dickey’s, which means she’s there most days after school.

“And there’s a lot of people, especially some I know, who are their main source of income in the household,” Alyssa said.

Between paying off her car, helping her family and saving for college tuition, not much is left over from Alyssa’s paycheck.

To keep from falling asleep in class or at work, Alyssa drinks caffeine daily. Usually it’s coffee, but not always.

“I’ve occasionally had [5-Hour Energy] before.” Alyssa said. “They’re actually really nasty. It almost tastes like cough medicine. But I sometimes put some in a Red Bull slush from the gas station. I don’t think it’s very healthy.”

Through the exhaustion, she keeps her goal of graduating in mind.

“I’m just trying to push myself because I want to just get my high school diploma,” Alyssa said. “I want so much for myself, I really do.”

The alarm clock rings once, possibly twice. The loud alarm makes senior Scout Lee’s migraine even more unbearable. She staggers to the bathroom to brush her teeth and shower. She can’t let her migraine control her day.

After she’s ready, she drives to Quik Trip to get her usual: a strong black coffee with vanilla to get through the long day. She arrives at school at 7:45 a.m., just enough time to hang out with her friends.

For Scout, it’s difficult to talk with friends while her head continues to hurt. The lights in the room appear more harsh than usual. She tries to concentrate on the words coming out of her friend’s mouth but she’s unable.

Scout is taking AP Chemistry, Photography and AP Art. In each class she has the same problem. She tries to focus on what the teacher is explaining on the board, but her mind wanders. The board in front of her disappears and all she can do is think about the pain.

“Sitting up is difficult enough so to be able to complete a task is really difficult,” Scout said.

Since Scout has senior out, she leaves after AP art for home. She eats lunch quickly because she needs to drive her sister to the gym and get to work before 3:40. Scout teaches preschool gymnastics and coaches competitive gymnastics.

“I get ready for bed, but I actually don’t go to bed until a lot later because I have to do homework,” Scout said.

Scout tries to remain awake to finish everything but it’s hard while her migraine persists. Going to bed is tempting, but she continues so she won’t have to catch up on loads of work the next day. She manages to complete all her homework, but she’s missed hours of sleep.

Scout’s migraines will sometimes last for days or weeks on end. During that time, she sometimes misses school for multiple days.

“The longest migraine I’ve had was 23 days in a row,” Scout said.

Scout takes different prescription medications to help diminish the pain, but she said that they don’t always work.

It’s difficult to go to school with a migraine, but it is even worse without enough sleep.

But Scout continues to push through regardless. With or without sleep, she still makes it through the day.

Math teacher Madison Wilson can finally feel her legs begin to rest. Her breathing starts to slow. She can finally rest.

Only two hours later, Wilson jolts awake to her alarm. She reads the time: 5:30. It’s time to start her day.

Wilson suffers from restless leg syndrome, an incurable nerve disorder that causes massive discomfort in her legs. She compares the feeling to when your legs are about to sleep which creates an uncontrollable urge to try to shake out that pins and needles feeling.

“When I do [have it] I just want to almost get a hammer and hit my leg, which seems crazy, but if you have restless leg you know how it feels,” Wilson said.

Wilson also has insomnia. Around six months ago, she was prescribed a medicine that has helped, but she still has about two days a week where she only gets two to three hours of sleep. She gets dressed for work and heads down to the kitchen for coffee, desperate for energy.

Restless leg syndrome runs in her family with her mom and aunt having it as well. But for Wilson it really bad when she became pregnant with her first child. Now with two preschool daughters and a football coach husband who’s already left for the day, she has to take care of getting them ready too.

She puts their clothes on, brushes their teeth, does their hair, gets their backpacks ready and makes breakfast. Some days it’s after only two hours of sleep.

Wilson says her biggest challenge is remembering everything in the morning.

“I went to the store, and bought a box that looked exactly like [saline solution], it wasn’t, it was hydrogen peroxide,” Wilson said. “I was so tired, I wasn’t paying attention, I put that in my eyes, so that was rough. Stuff like that happens every day, every morning.”

She takes her kids to daycare, and finally makes it to school. There she teaches her classes but the lack of sleep doesn’t severely affect her teaching.

“Maybe if it was my first year, it would be, but since I’ve been doing this for a while, I feel like it’s almost something I can do in my sleep,” Wilson said.

She tries not to drink any caffeine because it lessens the effect of her medication. After teaching all day, she picks up her daughters and takes them home.

“You feel like sometimes you’ve used all your energy and then you go home and your kids need you,” Wilson said. “So sometimes you have to save energy throughout the day so you can do stuff at home.”

She gets back in bed and hopes this time she can sleep. That tomorrow isn’t one of those bad days and she can get enough sleep. But if she doesn’t, at least she knows who she’s doing it all for.

“The kids. My kids, these kids, they’re just so good. They want to learn, most of them, there’s exceptions of course,” Wilson said. “But when they appreciate the help you’re giving it makes you feel like it’s all worth it.”