Newly hired girls wrestling coach Brittany Marshall was just 16 when she competed in her first state wrestling championship for Lewisville High School. The same age as some of her students now, Marshall only had three years of wrestling experience. She was terrified.

As the wrestlers lined up by weight class, Marshall began looking up and down the group. All she could think about was how she didn’t deserve to be there. There were players on her right who’d wrestled most of their lives, and players on her left who’d won multiple state championships already. And in the middle of it all was Marshall. Even as a sophomore she was a talented wrestler who had the skills to win. The only thing in her way was herself.

Walking onto the mats for her first match, all she thought was, “don’t mess up, don’t mess up, you deserve to be here.” Her entire junior year she was constantly convincing herself she was good enough. Marshall always saw the other wrestlers’ demeanors and the way they carried themselves and thought they were the real athletes.

She was just Brittany. The same unconfident Brittany who could never get out of her own head. It was a terrible mindset that she fought to escape every match. But standing in that chaotic arena with stands full of cheering fans, she remembered her friends and family were out there. That calmed her nerves. Hearing the ref’s whistle, she blocked out any other thoughts she had. Now it was all about winning.

For Marshall, her wrestling journey started in middle school.

At the time, she was a natural athlete without a sport she truly loved.

“I was good at a lot of things,” Marshall said. “But I never found anything that I wanted to be great at.”

That all changed when her long distance coach asked her to try out for the Lewisville High School wrestling team. At first Marshall refused. She’d never wrestled and didn’t plan on starting.

Her coach then made her a deal. If she attended tryouts, he’d buy her the biggest bag of Skittles he could find. Marshall immediately accepted. In her first time wrestling, Marshall beat a varsity athlete. She had earned her Skittles and secured herself a spot on the team.

The learning curve was steep at first for Marshall. Competing against players who’d been wrestling for years made her feel like she was constantly playing catch up.

However she quickly realized she couldn’t compare herself to those players. Instead she focused on her own self improvement.

I felt like if I could put my mind and my body under that much stress and still make it out on top, there’s nothing I can’t do in life.”

“It was hard but I was naturally athletic, and sometimes what took them to do in five years I could do in two weeks,” Marshall said.

By her junior year, Marshall began feeling more confident. That season, she still had multiple meets where coaches told her that if she had got out of her own head she would’ve won.

The hard work that season paid off and she made it to the state championship, but the round before the finals was tough. She made multiple mistakes and was barely able to keep going. But she made it to the final match, and wrestled with nothing held back. She wasn’t trying to have the perfect win. She wasn’t going to let anybody get in her way.

Marshall defeated her opponent to win the state championship match.

“It was everything that I wanted it to be,” Marshall said. “When I finally won, it was just relief that I did it, I accomplished it, I had faith in myself, and I accomplished so many things on the way.”

In her senior year, she wanted to repeat her state win. This time she felt more like she belonged. That she earned the right to be there. That tournament, Marshall didn’t feel the need to prove herself to anyone. She wanted another state championship to prove it to herself. In her preparation for the matches, she focused on ending each match as quickly as possible.

“I think that set me apart from people. When I wrestled, I wrestled not only for myself and to be the best in my weight class, but I wrestled to also get people’s attention,” Marshall said. “I wanted you to see how amazing this sport was, how awesome and intriguing it could be.”

Everything was clicking for Marshall in her final match to defend her title as the state champion. Her determination was at an all time high since this was the last chance she’d have to show colleges what she could do. 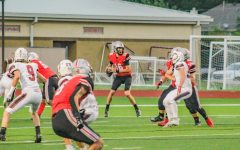 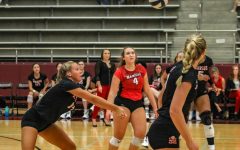 “My confidence wasn’t where it should’ve been, but my drive was where it needed to be,” Marshall said. “I just wanted to be recognized by colleges at that point, and you weren’t going to stop me from doing that.”

After graduating high school with her two state championships and three district titles, Marshall was recognized as a star athlete. However, at Wayland Baptist University, everything was at an entirely different level.

Her first year, Marshall would step into practice daily and know she was going to lose. While she felt she didn’t stand a chance, she knew it would pay off eventually.

“Eventually I gained that confidence. Yesterday the score was 12-0, today it’s 0-0,” Marshall said. “Just coming in with that mindset that it’s a new day, a new start, and I’m ready.”

One of the biggest differences was how much more was on the line at Wayland Baptist.

“You have to push yourself and be the best version of yourself,” Marshall said. “They’re depending on you… so if you want to win that trophy, you have got to bring your A-game.”

This caused Marshall to spend all her time in the gym and try to go even further. Her hard work paid off in her first and second year at Wayland Baptist, finishing fourth both years in the Women’s Collegiate Wrestling Association National Championship. But she wasn’t satisfied. When junior year came around, Marshall pushed herself even more.

It was just relief that I did it…I had faith in myself, and I accomplished so many things on the way.”

While she was handling the physical side of wrestling, the mental side began wearing on her.

“I’d worked so hard for a year and a half, day in and day out, it became like it was my job,” Marshall said. “I was working out so much it was taking the fun out of wrestling for me.”

The issue wasn’t Marshall’s competitive drive. She was a winner at heart. However, staying motivated became a challenge for the first time.

“Of course I wanted to win. You always want to win. The moment you tell yourself you don’t, that’s your downfall,” Marshall said. “It got to the point where I was just going because I felt like I had to.”

Weeks before her third national championship meet, Marshall attended a tournament where one of her friends was competing. She watched the match from the sidelines to cheer her on. As her friend fell behind, Marshall yelled out instructions. Marshall felt her experience with wrestling allowed her to know exactly what to say.

“I knew what to tell her because I’d been there so many times and I knew how hard she’d worked,” Marshall said. “To know what her goals were and to see her reach those goals, that meant everything to me.”

After her friend won, Marshall found coaching taught her something vital about who she was.

“That was the moment I realized that I don’t want to just wrestle,” Marshall said. “I want to be the one that’s helping athletes reach their goals.”

Marshall had re-thought everything about her future. But at the end of the day, she’d set out for a national title and she was there to win.

At nationals, Marshall won four matches, setting her up for another final.

This time it was a back and forth fight for first place. The entire season this is all she wanted. Marshall’s final match was tied at 5-5.

“If this is a legitimate goal you set for yourself, then you have to do everything that you can,” Marshall said. “I was just telling myself, you don’t stop shooting, you don’t stop until he blows the whistle, whatever you do you don’t stop.”

“I felt like if I could put my mind and my body under that much stress and still make it out on top, there’s nothing I can’t do in life,” Marshall said.

With pride and her accomplishment, Marshall took a sigh of relief. Now with a trophy in her hand, she felt weight lifted off her shoulders.

“Thank God I reached my goal, because I don’t know if I can continue to do this,” Marshall said. “It’s no longer fun to me.”

After graduation, Marshall still loved wrestling. She wanted to coach instead of competing and found her first opportunity at North Central College where she got her master’s degree.

She began searching for a head coach spot at the high school level, due to the lack of female coaches.

“There are thousands of kids, young women, who need someone to look up to in that [level],” Marshall said. “Most people have to have someone that has been there to look up to. It’s important seeing someone where you want to be and knowing ‘Hey she did it so can I.’”

But the job search brought its own challenges.

Marshall’s biggest inspiration to keep fighting these stereotypes were her parents.

“My parents have always taught me no matter what your goal is, don’t be afraid to go out there and work for it,” Marshall said. “If you work for it you’re proving that you deserve it and no one can take that away from you.”

At that same time, the school was looking for a new girls coach. With the chance to come back to the same district where it all started, Marshall accepted the job.

This is the first year where the female players have their own dedicated coach and class time. Sophomore Kennedy Cagle said this is an advantage for her and her team.

I want to be the one that’s helping athletes reach their goals.”

Compared to the boys’ wrestling program the girls’ wrestling team is very new, having only existed for three years.

With Marshall as the coach, she plans to spend the next following years carving out a legacy for the program.

“I wanted to establish a culture that is welcoming and family oriented,” Marshall said. “And be something that young women would want to be a part of, and not be scared of or shy away from.”

Senior Juliet Puente said that the program has come a long way from when it first began.

“It was different because we were surrounded by guys and there were only three of us,” Puente said. “It was just an experience for sure, but I’m glad it’s expanding.”

Coming back to where she first discovered her love for wrestling to inspire other young women to do the same means so much to Marshall.

“To be back means everything to me, because I’ve been to many different places and people support [those places],” Marshall said. “But there’s no support like the LISD support.”