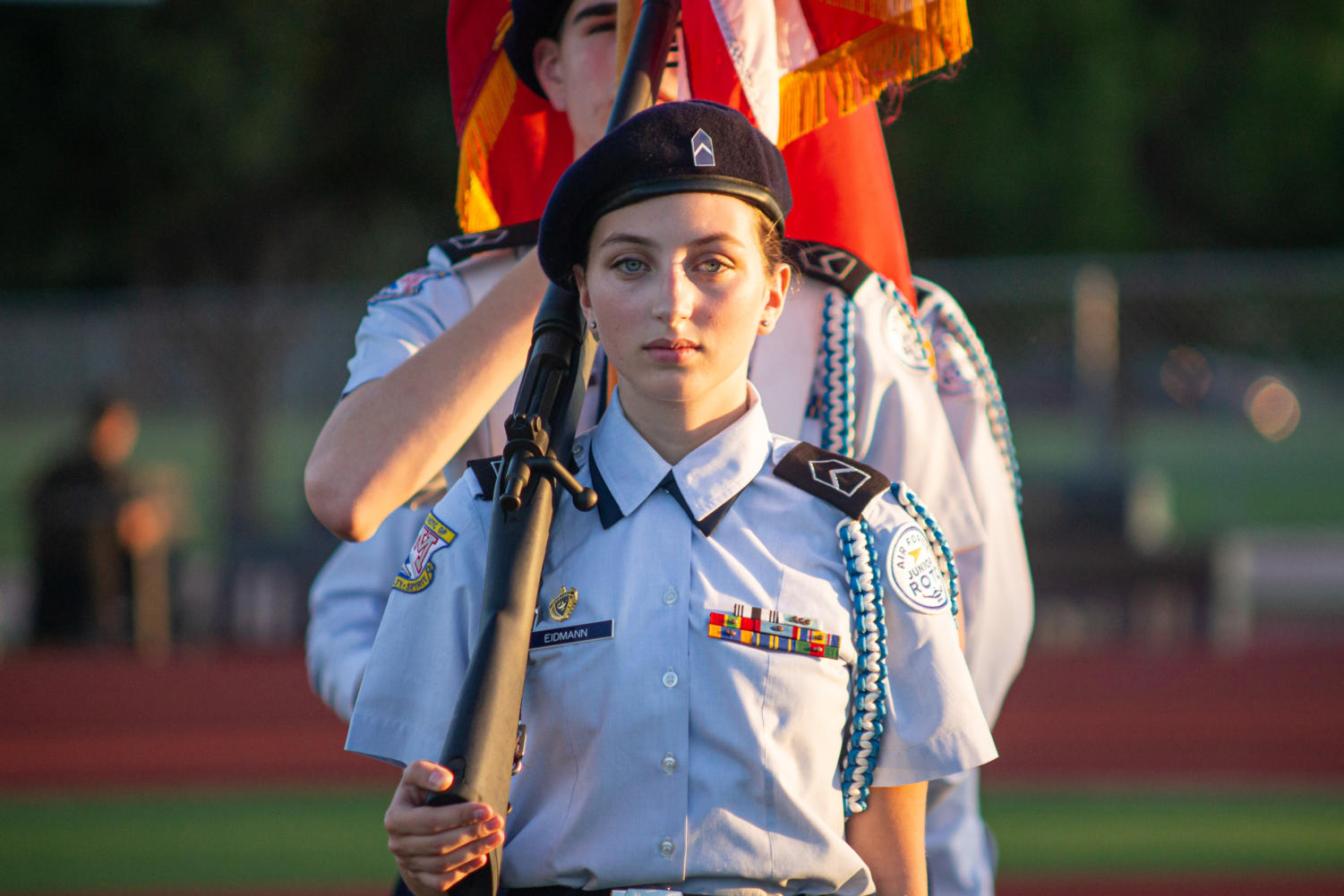 Senior Emma Eidmann presents the colors alongside other AFJROTC students, representing the Marauders prior to the Homecoming football game. (Emily Lundell)

Senior Emma Eidmann presents the colors alongside other AFJROTC students, representing the Marauders prior to the Homecoming football game.

Flying past the competition

She could see the blinking lights of instruments in the cockpit and hear the muffled transmissions of the plane through her headphones. As the plane lifted off, senior Emma Eidmann felt the ground fall beneath her as the sky opened up. To her, the earth from above was calming.

Below her lay miles and miles of green fields in rural Delaware, but she couldn’t pay attention on that. She kept her eyes on the sky in front of her.

Eidmann joined the Air Force Junior Reserve Officer Training Corps program (AFJROTC) her junior year. She heard the club offered an aviation scholarship, and the idea of flying interested her.

Because she enrolled in ROTC late into high school, Eidmann entered at the same level as incoming freshmen. She became involved quickly and as a result, she rose up in ranks. Within a year of joining, Eidmann became a flight commander for the organization, meaning she is in charge of the other cadets in her classroom.

It’s like one of those things that just clicked, and everything fit in place.”

AFJROTC Chief Master Sergeant Benito Salinas has noticed how Eidmann has grown in her leadership.

“She came in with a lot of raw talent,” Salinas said. “She’s definitely honed her leadership and her management skills.”

She drew inspiration from her father, John Eidmann, who flew for the Marines for 11 years. Though her father never put pressure on Eidmann to follow after him in the military, he said the transition into ROTC seemed natural for Eidmann.

“It’s like one of those things that just clicked, and everything fit in place,” John said. “This was really kind of something she gravitated towards. I think that makes it better for both of us because she can own it, and I can be proud of her for her decisions.”

At the end of her junior year, Eidmann was one of 150 students around the nation who was accepted into the scholarship flight program.

The program concentrated on helping students pass their Federal Aviation Administration exam and their flying tests to get their pilots licenses. The summer before senior year, she left for Delaware and spent eight weeks learning about aviation. The group spent four hours daily studying for their written test and after lunch they would fly for another four hours.

Eidmann received her private pilot’s license at the end of her training, being one of about 130 high school students in the country to receive the license. Afterwards, she met female Air Force pilots at a Women’s Day In Aviation Convention including Air Force Major General Jeannie Leavitt, the U.S. Air Force’s first female fighter pilot.

“It was really cool because there were all these women pilots for the Air Force there in their flight suits, and I showed up in mine, and actually wanted to talk to me,” Eidmann said.

General Leavitt told Eidmann that because she had graduated from flight school while still in high school, she was “set to do amazing things.”

“It was really honoring to hear that from someone so amazing,” Eidmann said.

Though the Air Force has the most females enlisted of any branch of the military, only six percent of people serving are females.

“Having more women in the Air Force than other branches is something that has driven me towards the Air Force,” Eidmann said.

In the past two years, six Marauder AFJROTC cadets have been selected for the pilot’s license scholarship. From these six, Eidmann has been the only female selected.

At the flight academy she attended, 16 of the 24 students were male. She felt outnumbered in the field, so she appreciated the unique opportunity to meet with more females with the same passion as herself.

“Being able to show up to somewhere that had a huge population of female pilots in the Air Force was just really cool,” Eidmann said.

Eidmann has a pair of golden wings that she proudly wears on her uniform as a reminder of her dedication to getting her private pilot’s license. She plans to attend college and become involved in Civil Air Patrol and the International Guard. Eidmann later hopes to enroll in the Air Force as a commanding officer while serving and pursuing her passion for flight.

“To other females pursuing ROTC and aviation I would say go for it 100 percent,” Eidmann said. “At times it’s going to be hard, but if you love it enough, you’re going to stick with it, even if you have to fight to do what you love.”

This story was selected for Best of SNO.