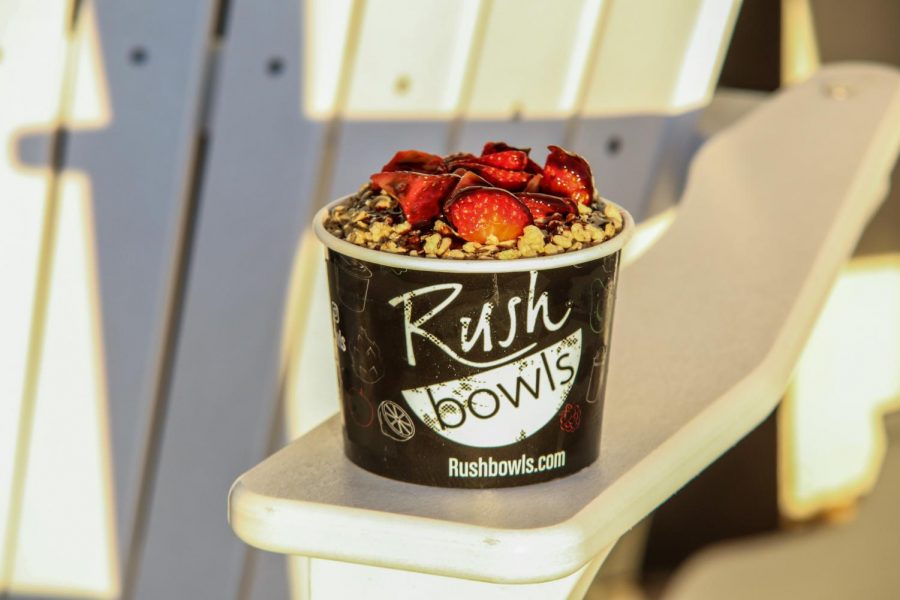 Nekter – 5/5
5810 Long Prairie Road
I’ve heard multiple people gush about Nekter Juice Bar, located only a few minutes from campus. After walking in, I began to understand why. The shop is laid back and has a great aesthetic, which is clear as soon as you are greeted by the sight of succulents and a wall full of plants. It also has comfy chairs and pillows, making it the most welcoming out of the four juice bars I visited.

Although the banana was overpowering at first, the bowl was delicious and had a strong berry flavor once it was mixed well. The smoothie itself was cold and had a smooth texture, while the granola gave it a nice crunch. Nekter managed to find the perfect middle ground between being too thick and too watery, making it a refreshing treat. It also had the perfect amount of toppings for the size of the bowl, so I didn’t run out halfway through and have to eat half of the smoothie by itself.


Rush Bowls – 4/5
2400 Lakeside Pkwy
Rush Bowls has the most extensive menu out of the four locations. It also offers more unique smoothie bowls, many of which are made with frozen yogurt. The shop itself is quite small, so it only has space for the line and a few chairs. However, the environment is still upbeat and makes up for limited space with outdoor seating.

The shop also allows customers to choose which type of milk and a topping they want. I ordered the choco strawberry bowl, which is made out of strawberries, bananas, chocolate sauce, milk — I chose almond — and frozen yogurt. This blend is all topped with granola, chocolate sauce and another topping. I chose strawberries, but there was a long list of options.

The choco strawberry bowl was thicker than the other smoothie bowls, and was the most filling. It was also piled high with toppings — almost to the point that it was difficult to stir without spilling.

But once I tasted it, it was clear that they played a major role in making it a choco strawberry bowl, as it was hard to taste those flavors with the banana. However, everything worked together to make it sweet without adding extra sugar, making it a great summer dessert.


Jamba Juice – 4/5
3180 FM 407, The Marketplace of Highland Village
Jamba Juice in the Marketplace of Highland Village is known to be the place to go for a smoothie, as it’s convenient and cheaper than most juice shops. Although seating is removed due to COVID-19, the shop normally has a lot of tables available. Jamba Juice also has a brightly-colored interior and the smell of fruit hits you as soon as you walk in, which makes it hard to not enjoy the environment.

I didn’t even know Jamba Juice offered bowls until I started working on this story, and considering that their website only lists four options, I didn’t expect much when I ordered a chunky strawberry bowl. However, I was pleasantly surprised when I tasted the smoothie, which is a blend of strawberries, soy milk, bananas, nonfat Greek yogurt and peanut butter. It was topped with granola, strawberries and bananas.

The Greek yogurt was definitely a standout addition to this smoothie bowl, which had a texture and taste extremely similar to strawberry Yoplait. In fact, the only thing really separating it from the brand name yogurt was the peanut butter and toppings. However, this isn’t necessarily a bad thing. It still tasted great, and sometimes it’s nice to eat something simple. It was also the biggest portion out of all the places I tried, which is a cherry on top when it was already the cheapest.


I Love Juice Bar – 3/5
2701 Cross Timbers Rd
Although I gave this smoothie bowl from I Love Juice Bar the lowest rating, I will say that the shop itself is adorable. With light green walls and a relatively open juice bar, the shop uses its limited space well to create a happy environment that reminds me of the outdoors.

I ordered the tangy pitaya bowl after practicing how to pronounce the word “pitaya” on the way there. The smoothie itself is made out of apple juice, dragon fruit and mango. It’s topped with granola, bananas, strawberries and local honey. I had no idea what to expect, and although the bowl took a while to be made, I was happy to see its pretty pink color.

The honey was extremely thick and didn’t seem to want to mix into the smoothie, no matter how much I tried. The granola was also really thin — almost to the point that it looked like seeds — so it was hard to taste.
Despite this, the fruit blend itself was thinner than the rest and tasted pretty good at first, especially when eaten with the strawberry slices. However, I found myself growing tired of it after a few bites. It was really sweet and reminded me of watermelon Jolly Ranchers, which isn’t what I was expecting. Although this smoothie bowl wasn’t my favorite, it would likely be a good option for people with a strong sweet tooth.