Kicking off the football season

Football team prepares for the first game of the season 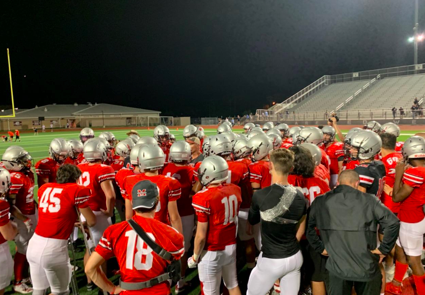 The football team came out on top at their last scrimmage and are hoping to continue their success as they head into their first game of the regular season.

With the preseason coming to a close, the football team has focused on their team motto of “ELITE” and making a team effort. On Thursday, the team will get the chance to put those words into action on the road against Arlington Bowie at 7 p.m.

Head coach Kevin Atkinson said the team’s phrase of the week was “ten strong.” He said it divides every position group on the team to share the load and take care of their respective space on the field.

“If we are all taking care of our square feet, we will be very happy with the results,” Atkinson said.

Last Friday, the team prevailed in its scrimmage, 31-21, over Wylie East.

Atkinson expressed pride in his team’s performance, singling out one group in particular.

“The offensive line was very aggressive and that is a good thing,” Atkinson said.

Last season, the football team came up short in the season opener against Bowie, losing at home 25-7.

Atkinson shared the team’s goals for tomorrow’s rematch versus the Volunteers.

“We have to match their physicality on both the offensive and defensive side of the football,” Atkinson said.

Atkinson added he is “extremely excited” about the team’s potential.

“Our goal is to win in the playoffs, not just to get there,” Atkinson said. “We want to get better as the season moves along and make our last game be our best one yet, whenever and wherever that is.”