Senior recognized for designs and costumes 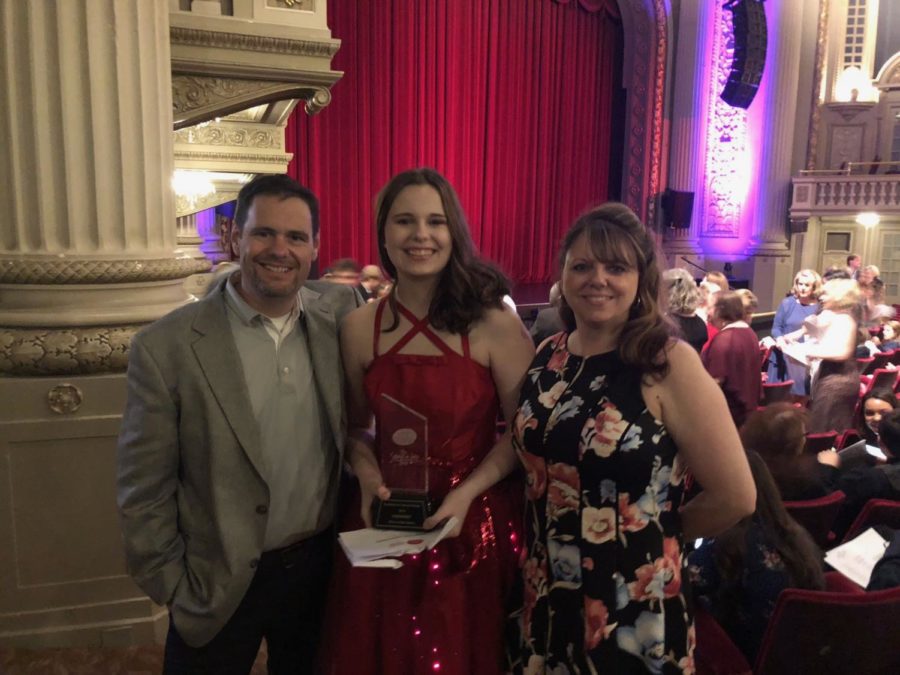 The last notes of the song that filled the large theatre were soon drowned out by the roar of applause coming from the audience. The spotlight lit up the stage.

As the speaker stepped into the light, senior Bri Johnson started to talk to herself to calm her nerves. She messed with the fabric on her dress that she made herself as she awaited the results. She reassured herself that if she didn’t win the Schmidt and Jones Award for costume design, she would be fine.

Though the announcer made a speech about theatre and the importance of costumes, Johnson’s nerves kept her from hearing it. After that, all she could hear was the speaker announce “Marcus High School” and the thunderous applause of the audience. Johnson’s smile stretched wide.

Johnson has now won two Schmidt and Jones Awards, a well known honor for high school theatre, for “Beauty and the Beast” and “Hairspray.”

“I’m proud of her to get that accomplishment,” her director, Denise Tooch said. “I’m proud of her hard work and passion. She deserves to be acknowledged.”
• • •
Johnson’s love for sewing started seven years ago. She said that she was born into “nerd culture,” meaning her family was really into things like anime and video games. One day her sisters decided that they wanted to go to an anime and video game convention dressed up as characters. Johnson was in charge of making their costumes.

As she taught herself designing and sewing, she fell in love with the art. At the time she had been in theatre for about a year.

“My love for theatre and design grew up together,” Johnson said. “They were like childhood friends. They grew up hand in hand.”

Starting out, Johnson said sewing was difficult because she had to teach herself. Her techniques were unconventional and it made the process take a little longer. She came into theatre with the intention of being a performer only, but she soon discorvered her love for costume design.
“She transitioned from just enjoying sewing, which was her first love, to enjoying actually designing,” Tooch said. “They are different, and watching her understand the difference has been really fun.”

One of the first things she designed was one of Fiona’s dresses for the production of “Shrek.” In the musical there were several different versions of Fiona. Each dress had to be an exact replica of one another.

“It felt pretty awesome when she put it on and it fit because I had been through like five different fittings where it wasn’t fitting right,” Johnson said. “It’s a really successful feeling when you are able to see something that you’ve been working on realized on someone.”

According to Johnson, creating costumes is challenging yet rewarding. She starts with sketching possible designs. She can end up doing around 20 sketches to get the director’s perspective. Then she buys her fabrics and patterns as well as figures out how to manage her budget. The process of constructing a dress can take up to 20 hours depending on the complexity.

“It’s very long,” Johnson said. “The only thing that gets me through it was that end feeling I got when I finally see that I make something. It’s hours upon hours of trial and error.”

Johnson said that she loves seeing people so excited when she shows them their costumes, and that feeling has made all the long hours of costume design worth it. She feels that designing is a unique experience that differs from performing.

“It gives the designer the ability to embody every single character rather than just being restricted to one,” Johnson said. “When you are the designer you get to look at each character as a whole. What motivates them, what their personality is and what their journey is.”

Johnson designed her own formal dresses and is even designing her own prom dress. She often has to juggle rehearsals, school, work and her own projects, but her love and passion for designing pushes her to keep doing all these things.

Johnson’s costumes were featured in an article in Teaching Theatre magazine (EdTA) by a New York based designer she met at a theatre conference for the International Thespian Society.

In the future, Johnson plans to stay involved in theatre and increase her work with costume design.

“Everybody has their thing and my thing is seeing a beautiful dress twinkling under stage lights and seeing it twirl,” Johnson said.