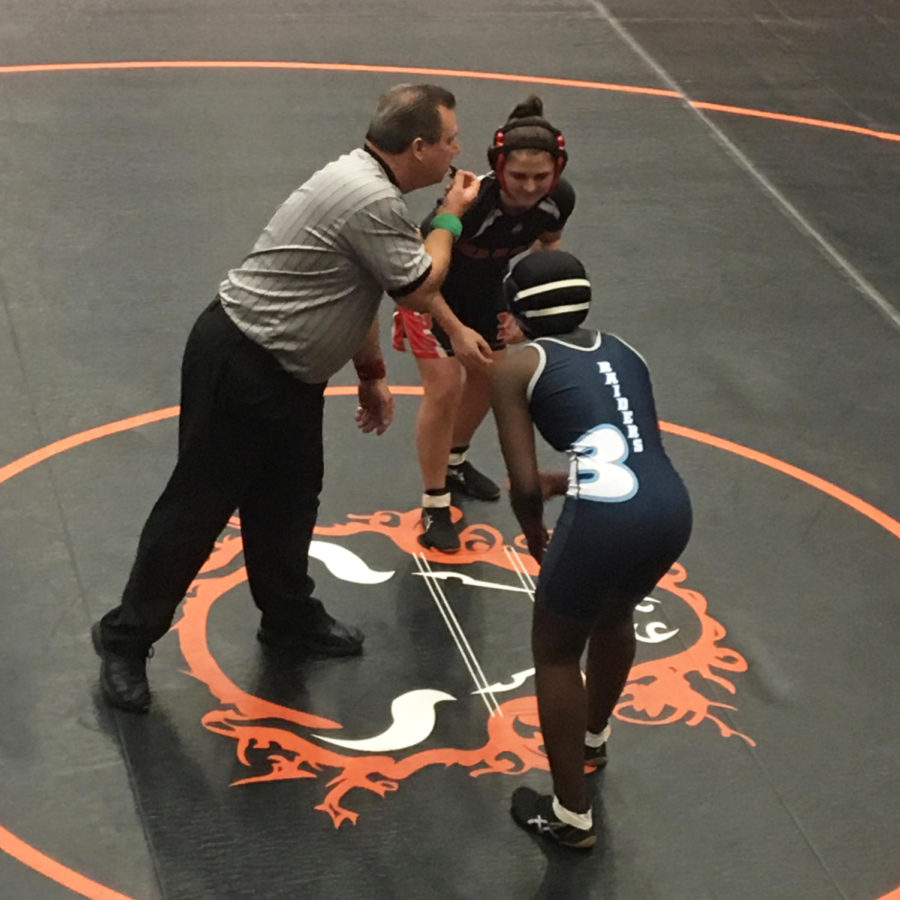 Sophomore Maggie Moore prepares to face off against her Ryan High School opponent in the girls' first meet.

Editor’s note: this story was named as an honorable mention for sports features in the TAJE Best in Texas contest.

The newly formed girls wrestling team competed in their first meet Jan. 18 and started off with a victory in a duel against Richlandz High School. Wrestling Coach Justin Peña said that the newbie team impressed him by not only winning one of their duels but also by how aggressive they were throughout the meet.

The push for creating a female team was led by junior Samantha Schnoor, the athletic trainer for the boys wrestling team. After watching the wrestlers practice and compete, Schnoor developed an interest in the sport.

“[It’s] just you and one other person,” Schnoor said. “It’s all up to you and your abilities.”

Between wrestling matches, Schnoor would ask the guys to show her moves they had performed. The wrestlers were happy to show off, and Schnoor picked up moves like single leg locks.
“It’s more about strategy than muscles,” Schnoor said.

In the beginning, she joked with Peña about competing, however, he took her seriously. On the bus ride home from the Rockwall tournament in December, he asked her if she was serious enough to start a girls team. She said yes, and the following week Schnoor told Peña she had five girls already interested.

“We were always looking to grow our program and I knew the best way to do that would be to get a girls team,” Peña said.

Schnoor said Peña worked quick to get the girls team ready. That week, he scheduled a hydration test, which is the first step to competing and determines a wrestler’s optimal weight and eligibility.
Peña said that he sees wrestling as a way for women to learn how to defend themselves and become empowered.

“If this is an outlet for women to gain confidence and to channel some aggression, then I want to give them that opportunity,” Peña said.

Before the girls first practice, Peña emphasized that the male wrestlers needed to respect the girls. Some of the boys commented on how different it was to have women in the room while they wrestled. However, most of the boy’s concerns were about the fact they would now be staying longer at tournaments.

“The guys team being very open about it and wanting a girls team as well as much as the coaches did, was kind of a breath of fresh air,” junior wrestler Justice Douse said.

Peña and the girls feel that the male wrestlers have received the new team well, encouraging and supporting them as they would any male wrestler. Lewisville and Flower Mound both have female wrestling teams, so the addition wasn’t shocking.

“I feel like every other school had one so it wasn’t that big of a deal,” junior wrestler Aidan Forgay said.

While most embraced the addition of the girls team, they’ve still faced some criticism and questions.

“Guys think we’re out of our minds just because they know how tough it is,” Schnoor said. “Girls think that it’s weird we’re doing a ‘guys’ sport.”

Despite the comments, the girls continue to practice daily, learning new moves with Peña. According to Douse, the girls are comfortable around Peña and his coaching is easy for them to understand.

“I remind our team that we’re not going to be good overnight, this is a process,” Peña said. “It’s going to take time.”

The girls practice almost every day after school with Peña, who teaches them the basics like takedowns, breakdowns to bring down their opponent fast and pins to get both of the opponent’s shoulder blades against the ground. These basics are helping them get ready to compete.

“I like being pushed to my limits, mainly being able to have an opponent who almost matches me perfectly, and is growing better as athletes and as people,” Douse said.

The girls team has increased its numbers in the last few weeks from six to 11 members. If the team continues to grow, they could even have their own coach. The team is still small, compared to the boys team of 65, mostly because it’s only been around for a semester. However, Douse is hopeful that more girls will join the team soon.

“I feel like it’s just another barrier that needs to be broken,” Douse said. “I feel like there are multiple girls here who could do a full-contact sport and be great at it, but because of the stigma that already exists in our society, they won’t.”

The girls’ lack of team members can cause challenges during meets because a match can be canceled if there is not an opponent from the same weight class. However, it doesn’t discourage the girls from practicing and competing anyways.

“That’s what wrestling teaches you, not to go around but go through the hardships you face in life,” Peña said.

Both Peña and the team members emphasized that if girls are interested in joining, they should come and watch practice to see what it’s all about.

“Come to practice, watch it, see what you think about it,” Douse said. “The next practice join in, get a feel for it, then make your decision about it.”

Wrestling explained, from weigh to pin
Discipline is found not only on the wrestling mat but in the wrestlers daily nutritional choices. Wrestlers are divided into different weight classes to determine who they wrestle against. To make sure they stay within the lowest possible class, which increases their chance of winning, wrestlers are careful with what they eat and drink.

“Wrestling is a true lifestyle sport. I say that because there is an immense amount of discipline,” wrestling coach Justin Peña said.

To begin competing, the wrestlers travel to Lewisville High School for a hydration test to determine whether or not they are eligible. They also measure body fat percentages which they use to determine their optimal weight to the ounce, which is the lowest weight they can drop to while still remaining healthy. If a wrestler goes below this weight, Peña replaces them temporarily and makes them raise their weight before they compete to ensure their safety.

To maintain their optimal weight, wrestlers have to constantly watch what they eat and drink, sometimes even sweating it out in saunas to reach their two pounds per week weight loss limit. This sets wrestling apart from other sports because athletes won’t be disqualified for weighing too little in tennis or football.

All this hard work culminates in the meets where the wrestlers can prove their skill. The wrestlers have 22 meets throughout their season. These meets can either be solo meets where each wrestler is competing for themselves to win or team meets where they try to earn points for their school. The matches consist of three one minute rounds, where wrestlers earn points by performing certain moves. For example, a takedown is worth 2 points, so throughout the rounds, they are trying to earn as many points as possible. At the end of the match, their points are calculated and depending on the spread between their points and their opponents they can win up to 5 points for their teams total. If during a match a wrestler is pinned they automatically lose and the winner gets 6 points for their team total.