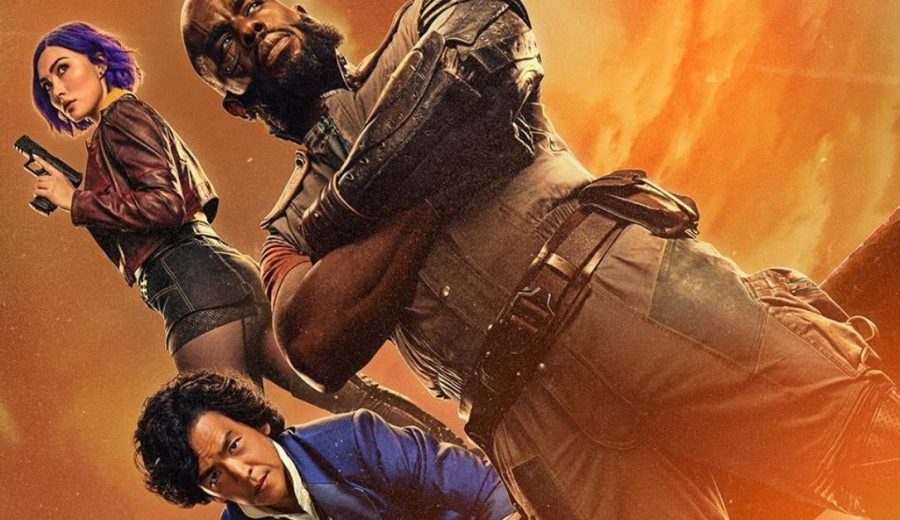 Editor’s note: This story was part of a portfolio that won superior print story portfolios in the 2022 TAJE Best in Texas contest. Individually, it won honorable mention for online entertainment reviews.

When a “Cowboy Bebop” adaptation was announced, I had high hopes.

The original anime was groundbreaking for its time, popularizing anime in the west with a unique, heartfelt story. The cast looked great and with Netflix’s bottomless budget, the live action version had the potential to be great.

But I was majorly let down. The truth is, a live action adaptation of an anime is almost impossible to pull off and studios need to realize that the medium just wasn’t built for live action. Yet that doesn’t stop studios to create abysmal shows like the new “Cowboy Bebop.”

The show follows bounty hunters Spike Spiegel, played by John Cho and Jet Black, played by Mustafa Shakir, as they cruise through a dystopian solar system, hunt rogue felons and try to make a living. Along the way, Faye Valentine, played by Danielle Pineda, a fellow bounty hunter with no memories, joins the two on their spaceship, the Bebop, and the three put their lives on the line to take down dangerous criminals.

For new and old viewers alike, the show’s plot is a bit of a mess. Each installment splits its time over three groups: the Bebop crew, the antagonist mafia and whatever criminal our bounty hunters are chasing. Flashbacks are sprinkled throughout to slowly reveal the main characters’ individual backstories.

Unfortunately, this layout can be confusing. Some plots begin and end in a single episode, while others continue through the entire series, and these two storylines are never blended smoothly. Many shows do use this type of storytelling, including the anime, but the live action show is just jarring with its frequent swaps in focus. It doesn’t give the audience room to breathe, and makes it pretty hard to stay invested in any of the plotlines. At the very least, it deserves credit for handling its main trio alongside constantly changing side characters, as well as the villain, who was given much more screen time than in the original series.

To fit this new plot, all the characters were rewritten, but the show could never capture what made the original characters great. The two main characters never had quite the same chemistry that their anime counterparts had. Instead, the new adaptation boiled down their relationship to a handful of serious moments and many more comic relief jokes. Faye’s character lost a lot of depth her original character had because of her constant isolated side adventures and her simplified backstory. However, the main antagonist, Vicious, received the biggest downgrade, simplified into a brainless, bloodthirsty and boring villain. If you enjoyed this show, I’d be amazed if it was for its characters.

If the show did one thing right, though, it’s the setting. The world of “Cowboy Bebop” is more than a simple dystopia. It’s set in the year 2071, but cops still use modern day pistols, and the streets of Mars are lined with the same garbage you’d see in New York City. It’s a Wild West story set in the future, and a key part of this atmosphere is making everything believable. The live action show has an amazing set and costume design, creating settings that easily immerse viewers in the world “Cowboy Bebop” creates.

The other highlight of the series is its soundtrack. Producers brought back the musical composers of the original anime for the live action show, an ultimately brilliant decision. Without animation, music was the most reliable way to recreate the smooth feel of the original. Jazz backdrops most scenes, linking the different settings with a blue mood but never interfering with the tone presented. The slow strings and soft horns may confuse viewers expecting a soundtrack to match an action show, but are light and easy to get used to, and an integral part of Cowboy Bebop, live action and anime alike. Even if you skip the show, the soundtrack is a must listen.

The new “Cowboy Bebop” had an impossible task: satisfy diehard fans, while staying open enough to welcome new viewers. The creators couldn’t rely on plots and callbacks cut straight from the anime, but they couldn’t go in too different a direction either. With this in mind, maybe no one should have had astronomical hopes for this adaptation, but even the cautious optimist would be shocked at how the producers abused both of these taboos. Out of the mess came a couple great recreations of iconic scenes, and fights that mimic’d the original show fairly well. Unfortunately, these are few and far between in a series that lacks identity. Straddling the gap between homage and novelty, the Cowboy Bebop remake fails to accomplish either, leaving the viewer wondering why they didn’t just watch the original.