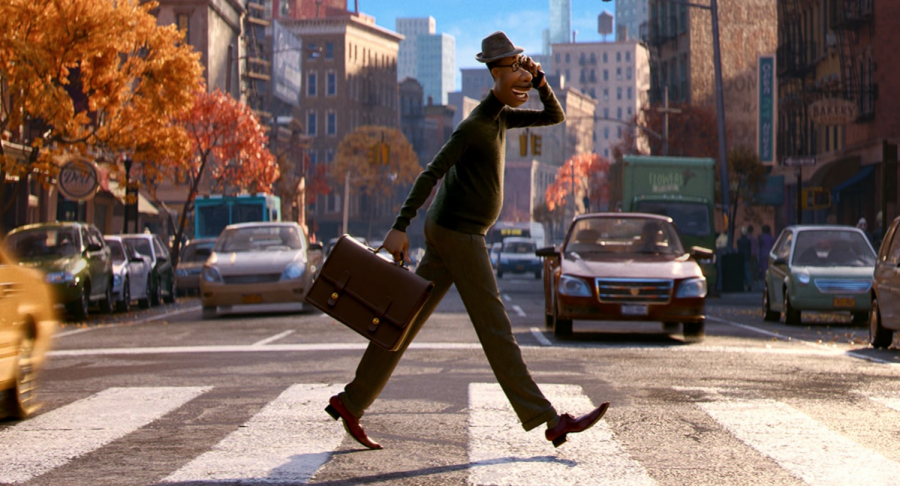 "Soul" is an entertaining movie with a strong message and star-studded cast, making it one of the best films of 2020.

When I was stuck at home this past winter break, quarantined for a good part of the two weeks, I was understandably pretty down. Confined to my room, I was only allowed to leave for food, water or outside air. I decided to log into a Disney+ account I hadn’t used in months to watch “Soul.” I expected it’d be a lackluster rehash of so many other animated movies, but at least a way to get my mind off things. What I found instead was an absolute gem of a film that would rank among my favorites of 2020; I rate it an easy 9/10.

“Soul” is the story of Joe Gardner, played by Jamie Foxx, a struggling but passionate jazz pianist in New York City. When he lands an audition with Dorothea Williams, played by Angela Bassett, he thinks he’s found his path to fame, until he dies. Don’t be too alarmed, though; the film, and Joe’s story, is far from over. Joe rushes to return to his life in time for the audition with Williams, and his unfolding journey is both heartfelt and entertaining. Further than that, though, its philosophical elements are also well developed, challenging viewers with the question, “What does it really mean to live?”

The movie starts strong and dips very few times in its storytelling. The first 15 minutes of the movie will immediately make you feel for Joe and make sure you’re aware just how effective it’ll be at storytelling.

From there, “Soul” knows when to speed up an otherwise monotonous scene, slow down to hammer home the emotional peaks of the film or run at a perfect, steady pace. Of course, there’s slower moments of hijinx or fluff, but even then there’s always some harmless fun to enjoy. The bottom line is that you’ll almost never be bored by “Soul,” and that’s something not many movies can do. Whether you want something that’ll occupy your thoughts for the rest of the week or just need a film for a relaxing Friday night, “Soul” is an effective and fairly safe choice.

The presentation of the film, while not its strong suit, is nothing to scoff at either. The animation displays the full abilities of the studio, with fluid movements, vivid colors and expressive characters.

The soundtrack is great too, and wholly unique. Jazz is a genre of music Pixar has explored very little in the past, and isn’t as popular in movie scores as rap or pop. However, this movie embraces jazz completely, making it the soul of New York City and our main character. The scenes where Joe becomes lost in thought while playing wouldn’t be the same without the masterful piano work to accompany his gracefully animated fingers. The replay value of the soundtrack is high as well, I’m sure many viewers will be listening to the full playlist for weeks after watching.

However, the characters are the heart of the film. Without the charisma and compelling journey of Joe and 22, an unborn soul he meets along the way, the film would feel directionless. Clear goals, relationships and ideologies are set for the main characters early on, leaving plenty of time for them to develop their perspectives on life and friendship.

Joe stands as one of my favorite main characters in Pixar, with a journey both compelling and grounded. Foxx delivers one of the most impassioned performances of an animated character in recent years, and we can feel everything that happens to Joe as if it were our own experience. Tina Fey’s character, 22, serves as a great accompanying character as well, with her banter always able to lighten the tone of a scene. The two are the highlight of an all around phenomenal movie.

Cinematic blockbusters used to come out every other week before releases stopped entirely, so it’s an understatement to say “Soul” came out during a complicated time for the film industry. Against all odds, the movie accomplished what I’d call the near impossible. In the coming years, I can say with full confidence that “Soul” will become a family favorite, and its popularity will remain for years to come. With a memorable cast, compelling story and powerful message that is sure to leave viewers thinking about their own lives, “Soul” more than deserves its 9/10 rating.I’m excited for my rewatches that are sure to come.