Look at all those chickens

The Marquee tests the rivalry between Chick-Fil-A and Popeye's 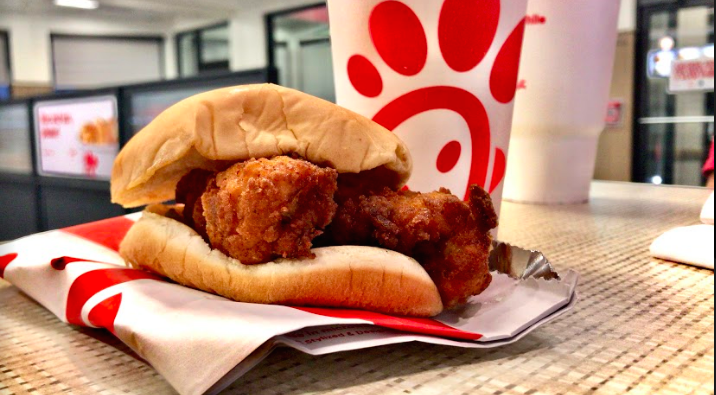 Although Chick-fil-A's breading was on the bland side, the chicken was crunchy and had a nice flavor.

Chick-fil-A’s buns were warm when they came out of the packaging and were toasted to perfection. They were arguably bland and tasted like every other bun, but there was just enough bread to compliment the amount of chicken that you got in your sandwich. Like those from Chick-fil-A, Popeye’s buns were also warm and toasted when they came out of the packaging, but were arguably more flavorful. Unlike the Chick-fil-A buns, it tasted like the Popeyes’s buns were seasoned before they were toasted and used for the sandwich, giving it a more homestyle feel than Chick-fil-A bread.

The chicken, the main course, the real reason you are all here. Popeye’s and Chick-fil-A have very different styles of chicken, which was apparent from the first bite. Chick-fil-A has breaded chicken that keeps the insides warm and moist. The breading was crunchy even after being put into the packaging, but not enough to crumble and make a mess when you bite into it. Their chicken had a very nice flavor that was consistent throughout the whole sandwich, but it was not overpowering though and you could still taste the bread and pickles. On the other hand, Popeye’s chicken had a more southern fried aspect to it, as the restaurant advertises. The chicken was more bland than Chick-fil-A’s and seemed to rely more on the seasoning of the breading. Popeye’s sandwich also came with mayonnaise and pickles on it, which felt like a crutch for the less flavorful chicken. This is unlike Chick-fil-A, which uses the pickles to enhance the flavor of their sandwich, not create it.

Even with all of their differences, Popeye’s and Chick-fil-A’s sandwiches are definitely competition. Which one you’ll like better will depend your preferences for your ideal sandwich. I preferred the Chick-fil-A sandwich, but my photographer preferred the Popeye’s sandwich. I would eat both sandwiches again and I definitely recommend everyone to go try them and figure out which one you prefer.