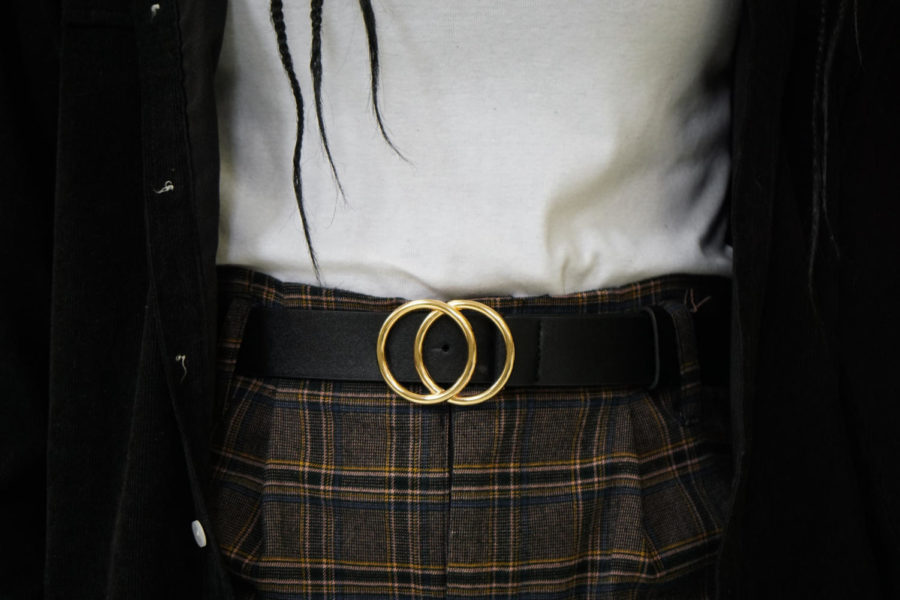 Senior Aryel Jacques bases her style off of trends from the 90s.

As fall approaches, it’s time for students to swap their shorts and t-shirts for jeans and sweaters. The world of fashion is constantly changing, so navigating seasonal trends can be challenging. For students looking for some style direction this fall, two fashion fiends on campus are here to help.

“I really attempt my best to only own pieces that have some sort of story to them,” Collins said. “I try to go and thrift vintage pieces because I like the character that each one has.”

Collins makes a point to wear one-of-a-kind clothing. To achieve this, he sometimes has to get creative.

“I ripped [my jeans] myself which I highly suggest because you can kind of personalize where you want the rips to happen,” Collins said.

For those who are just beginning their fashion journey and don’t know where to start, Collins has some tips and tricks.

Before going to raid any thrift stores, he suggests ditching the classic leggings and gym shorts look by throwing out clothes that are comfortable but not stylish. Then, Collins recommends going shopping for bold, unique pieces.

“You’re going to be wearing a collection of good pieces. There’s not going to be anything that’s holding you back,” Collins said.

However, for those who don’t want to throw away their whole closet – Collins approves  of a few trends considered “basic,” and thinks people who already own a pair of FILA Disruptor sneakers are on the right track.

“That is one of the only school-wide accepted things that I will hop on board with,” Collins said. “The chunkier the white shoe, the better.”

Many people are recycling decades-old trends – from 70’s inspired bell bottoms and funky patterns to Victorian-era puffed sleeves and floral prints – to fit their own style.

Senior Aryel Jacques, however, believes that 90’s inspired fashions are going to be in the spotlight this season, many of which she personally wears. Her go-to fall outfit consists of plaid pants, white doc martens, a plain white shirt and a corduroy jacket.

“Denim jackets are always a thing, kind of a 90’s thing, but people are wearing them a lot now,” Jacques said. “Corduroy too, just more textured stuff,”

To Jacques, fashion is an important part of her everyday life.

“I think it’s a cool form of self- expression,” Jacques said. “Plus, I feel like you feel different depending on what you’re wearing.”

Jacques styles her outfits by beginning with a bold piece of clothing and building around it.

“I usually have one thing that’s patterned or colorful and then another thing that’s super simple, and then I just add more stuff,” Jacques said.

Jacques takes inspiration from stars like Zendaya Coleman, especially for her bold and fearless style.

“Zendaya always has good clothes,” Jacques said. “The thing is, she just wears whatever and it always looks good. So, that’s the goal.”

However, Jacques is not a fan of outfits that consist of the same name brand, like Nike, from head to toe.

“Not everything has to have a check mark on it,” Jacques said.

Instead, she encourages students to focus on their own personal taste instead of wearing many expensive pieces at once to impress others.

“Just wear stuff you like, and you don’t have to spend a lot of money to find cute stuff,” Jacques said. “It’s not what [brand] it is, it’s how you put stuff together.”