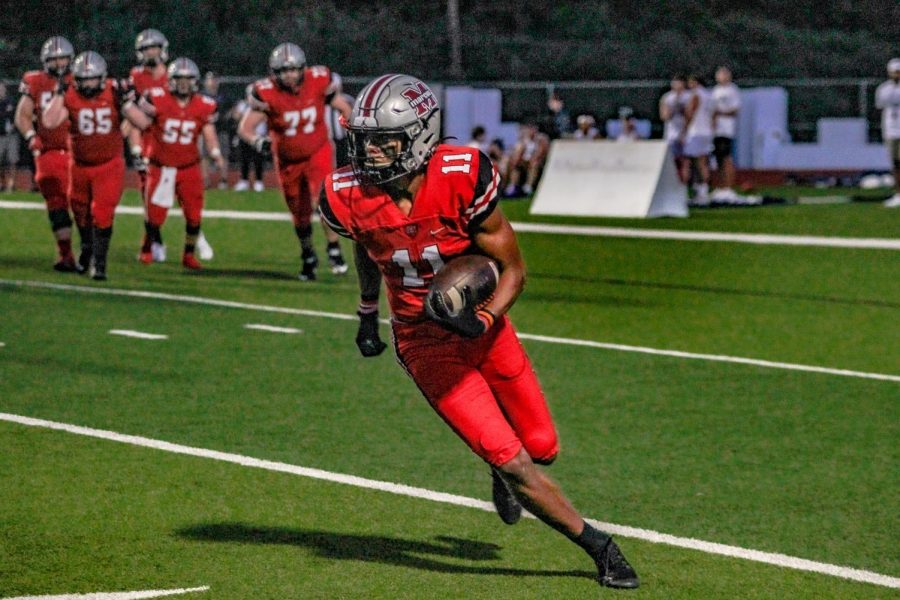 Senior receiver Dallas Dudley carries the ball across the field during the Mound Showdown game on Sept. 24.

This season, senior wide receiver Dallas Dudley has made his name known. With 1,153 yards from this season, Dallas has been instrumental to the team’s success. At the last game of the season at Plano East, Dallas had 138 yards which gave him enough to break the school record for most career receiving yards with 2,452. The team still has the postseason to play, so he can keep adding to his new record.

Dallas says that having the record is an honor but at the end of the day just loves playing.

“It’s a big accomplishment for me, especially seeing the guys that have come through here,” Dallas said. “That’s one of the biggest things I love to do here. I love to break records, I love to make some memorable moments and in high school you got to have fun with the game and that’s what I like to go out and do.”

Just in his senior season, Dallas has made multiple highlight plays, including his 4th quarter catch against Flower Mound, when the team was down by 3. Senior quarterback Jaxxon Warren threw it towards the middle of the field with one Jaguar defender in front of him. Dallas jumped high and caught the ball right over the defenders’ fingertips, turned and ran for more yards. He’s made multiple catches against Plano West where he snatched the ball away from defenders like it was nothing. He plays like he was born to do this.

Football is in Dallas’ blood. His uncles played college football, and his dad Rickey Dudley was a former NFL tight end, who played on the Oakland Raiders and Tampa Bay Buccaneers. Rickey said he felt pressure to put Dallas into football almost immediately, but he didn’t want to force the sport onto him. He wanted him to find his own way.

Dallas played only basketball until seventh grade when he told his dad he wanted to play football too.

With all the knowledge from his playing career, Rickey was ready to offer Dallas all the information he could.

“It was one of those things where when you see the kid wants something and you have the knowledge to give to him, you just do it,” Rickey said.

From then on Dallas played both sports, his father helping him improve mentally then physically by watching film of other players.

But Rickey says Dallas is the one who put in the work at the end of the day.