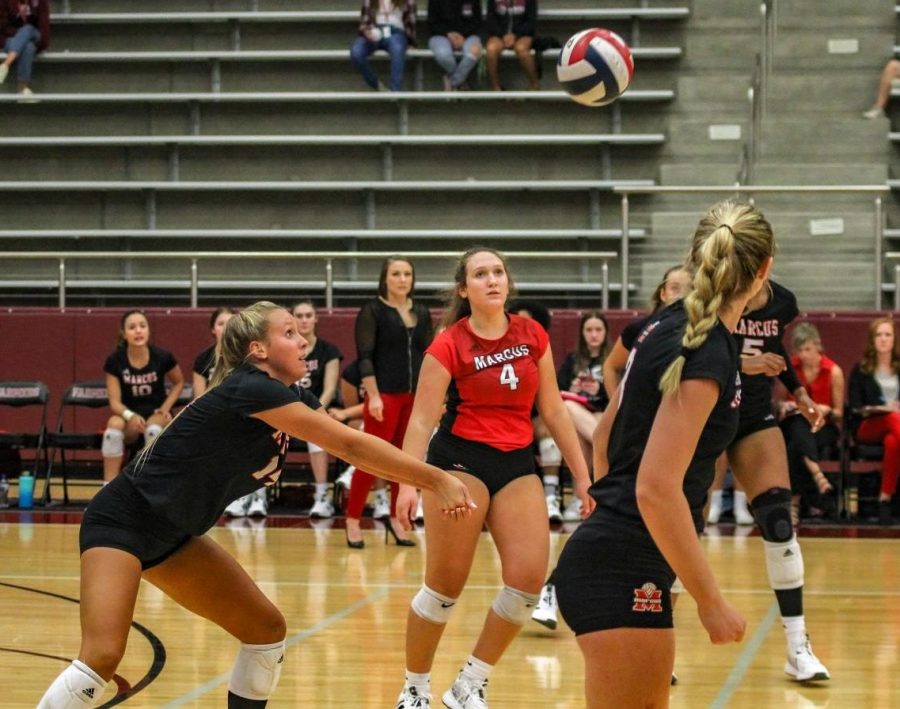 Boyd prepares to hit the ball at the Lewisville game which the team won 3-0.

Days leading up to the Sept. 10 volleyball district opener against Plano East, senior Maggie Boyd knew she was just a couple points shy of reaching her 1,000 point milestone. Something that would cause her to become one of the best volleyball players in school history. But on the day of the match, Boyd wasn’t focused on stats. She was never obsessed with her own success. Instead she was figuring out how she’d get her team’s first win of the season.

Ever since she was 6 playing at her local YMCA, Boyd had an unmatched passion for volleyball. She loved the adrenaline she felt while playing and naturally was good at it. That energy and skill she brought to the court continued. By the seventh grade, Head Coach Danielle Barker noticed Boyd.

“She was someone who was sticking out like a sore thumb,” Barker said. “We knew she would be super special.”

During Boyd’s time on the team, they have made the playoffs each of the last four years. However the team has had the same issue year after year. After great regular seasons, they’ve struggled to make it past the first round of the playoffs, like last year.

After a great regular season going 10-3, the team lost to Guyer in the first round. However it was a learning experience for the five returning players to appreciate their senior season.

“I think it taught us a lot,” Boyd said. “For the returners that came back this year, we know that we can’t take anything for granted and we really have to play like every game could be our last.”

Over the years, Boyd has developed close relationships with the five returners, including senior setter Paige Hildebrand and senior outside hitter Haidyn Sokoloski.

Hildebrand has played with Boyd since their freshman year. She says their close friendship has helped their connection on the court.

“We’ve built a really good connection,” Hidlebrand said. “Normally whatever I set to her, she can always put it down.”

Boyd said the connection between setters and hitters is essential to the team and has been a big focus over the years.

“It’s not just timing, it’s the location and everything,” Boyd said. “And that’s how you score points so we’ve had to work a lot on that this year.”

Hildebrand says the team is fortunate to have such a valuable outside hitter like Boyd.

“A lot of teams don’t have a player like Maggie,” Hildebrand said. “I’m sure it’s really hard for her, always being relied on but it’s really helpful to the team and she knows that.”

Senior Haidyn Sokoloski said that relieving Boyd of that pressure to always do well has been a focus this season.

“We’re trying to take some of the pressure off, but we all know she feels it,” Sokoloski said. “But when she’s under pressure, she always does amazing.”

Along with Boyd’s talent, Sokoloski says everyone respects her because of her leadership as well.

“She kind of helps run everything,” Sokoloski said. “When Maggie tells you to give more effort, you will give more effort. She will tell you what to do. She takes control whenever she’s on the court.”

Coming into this season, the team had a big focus on developing chemistry with all the new players on the team. While it took time to build that chemistry, the team went 16-5 in their scrimmages and tournament games. Now playing in district games, Boyd feels like the players have really come together as a team.

“At the beginning of the season that kind of held us back a little bit in my opinion, but now that we’ve figured it out, I feel like we’ve improved so much already,” Boyd said. “Now that our chemistry is there, I think we’ll have a lot of success.”

With high rankings for both preseason national and state, the team had high expectations going into the district opener against Plano East. The matchup was also a special one, as Boyd always loves playing in the big rivalry games against the Panthers.

After winning the first set, Boyd’s coaches informed her that she was only three spikes away from reaching 1,000. She felt pure excitement but focused on winning the game.

Two spikes later. On any other play, Boyd jumped up to hit the ball, but as soon as the ball slammed into the ground, it was a play she’ll always remember. The announcer told the crowd that she’d reached her 1,000th kill. The home crowd began cheering as her teammates began screaming and cheering, holding up their huge “Congratulations” sign.

It was the perfect moment. Until Boyd quickly realized they still needed to finish the match.

“I was just so happy,” Boyd said. “But it was in the middle of the game so we had to move on from it really fast, but I was definitely thinking about it the whole night.”

The game concluded with a 3-0 victory, and Boyd ended with 18 kills for the night. For her performance, she was awarded the Star Local Media’s Athlete of the Week receiving 35% of the online votes.

After reaching the milestone, Boyd wasn’t satisfied. All it did was motivate her more to accomplish more.

“I really wanted the milestone,” Boyd said. “I’ve seen other people get it at different schools and now that I finally did, I just want more.”

Winning is just something Boyd has been familiar with her entire volleyball career. While excelling in playing indoor volleyball at the school, Boyd has also shined in beach volleyball. Playing with her partner, Gabrielle Walker, a Flower Mound High outside hitter, the two have had a dominant run at the national level, winning four National AAU Junior National Beach Volleyball championships and both earning beach volleyball scholarships, with Boyd going to UCLA and Walker going to USC.
Their most recent win was the most special to Boyd, as it was the national championship. The two practiced three or four times a week while lifting weights on the side.

But Boyd says the effort and time the two put in was fully worth it.

“It’s just such a big accomplishment,” Boyd said. “You work so hard the whole season and then to be rewarded like that is just a great feeling.”

While dedicated to having a great last indoor volleyball season with her teammates, Boyd’s love for beach volleyball is unmatched.
“It’s just more relaxing, and I love parts of indoor, but I really like how individualized beach is, because you can do every part of the game,” Boyd said.

Now playing district games, Boyd hopes to end her season far into the playoffs but at the same time enjoy her last year.

“It’s really sad. I’ve enjoyed my time here so much, I’m just hoping that I can make this year the best that it can possibly be,” Boyd said. “Just having fun, not dwelling on losses, just learning from them and moving forwards.”