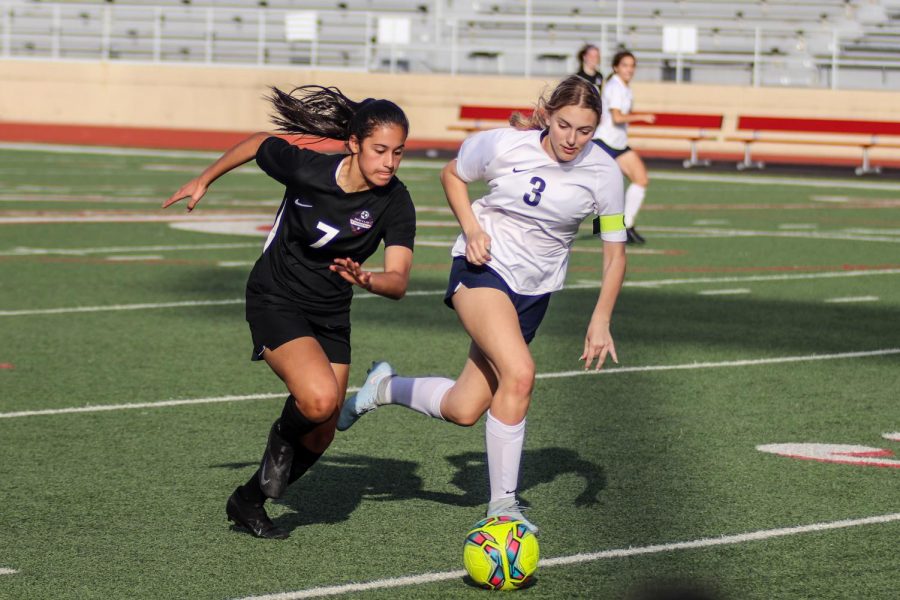 Sophomore Bella Campos chases after the ball before stealing it back for her team.

Both teams’ student sections were packed when the varsity girls soccer team played against the Flower Mound Jaguars on April 9. The Lady Marauders had practiced endlessly because they knew everything was on this game.

It would determine whether they would advance to the state semifinals.

“We knew that this was going to be a total battle,” Assistant Coach Erin Hebert said.

Hebert said that while concentrating on the season during this year’s uncertainty was difficult, the team made sure to prioritize soccer.

“I just think the girls were determined to have a great season and to stay focused through all of the chaos happening currently in our lives and in the world,” Hebert said.

COVID-19 had taken away playoffs and the latter half of their last season, so they were determined to make up for what they missed.

However, building team spirit was a challenge. In previous years, athletes were able to bond over bus rides and team dinners, but this year, none of that was possible.

“It definitely took a toll on just the way we warm up, the way we do stuff,” varsity member and senior Emma Lasater said. “And the little things that you would think that [are] so customary [we] couldn’t do anymore.”

Team bonding wasn’t the only challenge the team faced. Training was vigorous before the season started and only became more intense once they started playing again. However, the players pushed through it because they had a goal in mind: the playoffs.

“We all just kind of agreed as a team, ‘We’re going to work our hardest because this is all or nothing, pretty much’,” Lasater said.

They practiced and watched opposing team footage to prepare, but the first stretch of the season was rocky. While the team had some wins, they also had their fair share of ties and losses.

To advance to the playoffs, they needed to place in the top four teams in the district, but during that period, they were sixth. To turn their luck around, they knew they needed to work on changing their mentality.

The coaches encouraged them to focus on future games instead of dwelling on past ones, and on March 5, the team beat Hebron 1-0.

The victory turned into a month-long winning streak. The Lady Marauders advanced to play Lewisville, who they beat 5-0. Then Coppell, 2-1, Plano East, 5-1.

Because of the number of games they had lost before, they would have to win every game afterward to get a chance at playoffs.
“They knew, ‘This is either the end of our season, or we’re going to win this,’” varsity member and sophomore Maddie Reynolds said. “And then it’s like you can feel the energy coming off everyone.”

They advanced through teams until they had reached the regional quarterfinals, and then regional semifinals. With each team they beat, the student section at games became more crowded.

Lasater says that support from the school is what motivated the players to push themselves to their limits.

On April 6, the Marauders beat Keller High School 3-0, moving on to the regional finals against Flower Mound. If they won this game, they would advance to the state semifinals, and have a chance at the state championship.

They knew Flower Mound would be a challenging competitor, and there was tension because what stood between them and the state semifinals was a rival.

“You have the anticipation of how the game is going to go over, and you feel those nerves, but you’re also excited,” Reynolds said. “Because this is a good matchup, and you know it’s going to be a good game.”

After the game was over, the team came together in a huddle, and the coaches offered them encouragement. They had lost 3-0.

“Right after the game, we gathered together and Coach Hobbs talked to the girls,” Hebert said. “And he let them know that even though the game didn’t go our way… he was so proud of them and all the success they had had this season. And that they needed to keep their heads up.”

The end of the game was bittersweet because the team had advanced farther than anyone had expected them to. But their season was over. This was heightened by the fact that it was the seniors’ last game.

“I was devastated,” Reynolds said. “Not only because we had lost, but I didn’t feel like I could have done my best for my team. I feel like we could have done better, and the seniors were leaving us. And all of this was hitting us at once.”

While the outcome wasn’t what they had hoped for, the team had much to celebrate.

“I think that us getting this far was an accomplishment in itself,” Lasater said.

Hebert says she is proud of the hard work the girls put into this season.

“They’re always lifting each other up,” Hebert said. “They never stopped going. They’re super tough, fierce and competitive against whichever opponent, whoever the opponent may be.”