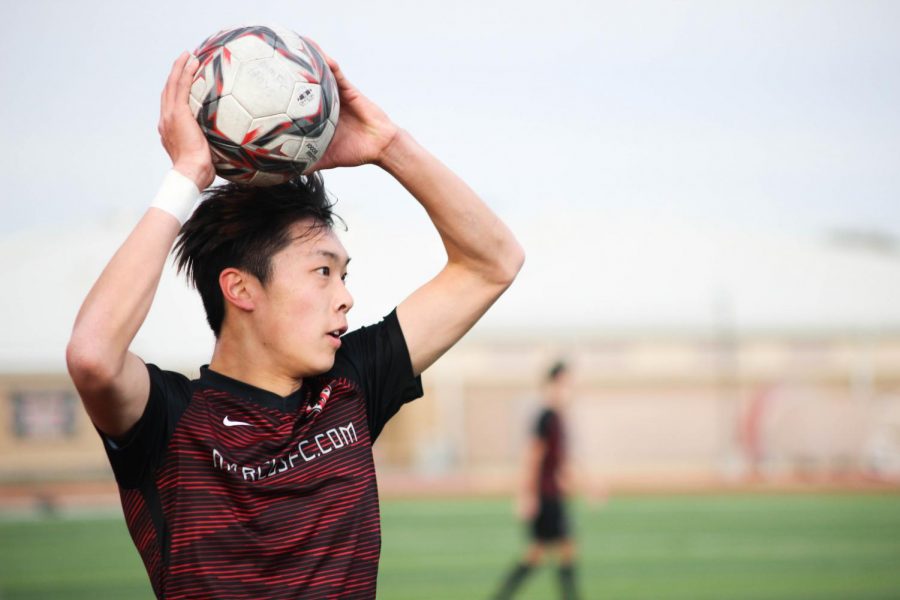 Junior Andrew Wang prepares to throw the ball onto the field during the Marauder's game against Rowlett High School on Jan. 16.

The date is Jan. 9, 2021. It was frigid on the soccer field. The contrast between the athletes’ body heat and the cold left their lungs burning. Head Coach Sam Garza watched from the sidelines with pride as the Marauders played in the North Texas Elite Showcase.

“It’s one of the top high school showcase tournaments in the nation,” Garza said. “Usually we get teams that come from as far as California, Arizona, Mississippi, Louisiana. Unfortunately, we couldn’t do that this year because of COVID.”

Although there were less teams, the tournament went on.

It was the final game of the tournament. The Marauders fought hard to get there over the course of the last month, so they wanted to start the game off strong.

The McKinney Boyd Broncos struggled to keep their goal guarded as the Marauders approached. In that moment, sophomore Avery Estell saw an opportunity. There was an opening in the wall of athletes guarding the goal. But the window was closing fast and their goalie was prepared to take the hit — if Estell took the shot, there would be a low chance of it actually scoring.

“I was really just shocked that I found myself in that position,” Estell said. “Getting the ball in front of the goal, I was pretty excited.”

Estell received the ball, took a deep breath, and lined up the shot. He ran and kicked the ball, sending it through the air towards the goal.

“I really didn’t think anything,” Estell said. “I had no time.”

According to Garza, there is no single driving force behind the team. He believes that everyone has pulled their weight both in practice and on the field.

It was this same attitude that kept the team together when COVID-19 forced schools across the world to go online, ending last year’s soccer season. Through it all, the team kept in touch via WebEx calls and other digital platforms. They also kept exercising with what they had at home, in the hopes that they would get a season this spring.

Sure enough, in January 2021, the team got their wish. The season picked back up, but the virus had changed the entire sport. Soccer is an activity where it’s hard to socially distance.

There is currently no program for participating in soccer virtually, so all team members are either in-person or Virtual Plus.

Along with the changes in attendance, there were new locker room rules. Only in-person students have lockers, while virtual plus students, such as senior Jack Golden, don’t. They take their belongings home with them after practice.

“We all have to socially distance, and it just doesn’t have that same feeling that it used to have,” Golden said.

The games also look different this year. People are required to social distance everywhere, from the bleachers to the sidelines. Athletes are required to mask up while they’re not on the field.

“While you’re on the sidelines, you have to have your mask on and the benches are spaced out six feet apart,” Golden said. “It’s weird because you don’t get that same ‘rah rah’ moment.”

Nevertheless, the team adapted to the new environment. Although sanitizing equipment seemed like a daunting task, Garza’s father came to the rescue.

“My dad works in the pesticides industry, so he has a bunch of sprayers,” Garza said. “He actually gave us some sprayers and sanitizer fluid, and then we clean off our balls, equipment and stuff that we use on a daily basis.”

But in that moment in the North Texas Elite Showcase, the new COVID-19 guidelines didn’t matter to Estell. All he was focused on was the quickly closing window of opportunity to score a goal.

He took the shot.

The ball flew past McKinney’s goalie and into the net. The team leaped up in celebration.

“Honestly, it didn’t even feel real,” Estell said. “It’s one thing just to score during preseason, but to score during this tournament against a decent team. It didn’t really set until later that day.”

That would go on to be the first of three goals that the Marauders scored in the North Texas Elite Showcase finals. They came out on top of the Broncos, making them the tournament champions.

Golden said that winning the tournament put the team on track for a successful season.

“It was definitely a huge confidence boost for everybody, for us to go out there and perform the way we did,” Golden said. “It really helped us figure out some key movements to understand how we all play. It was a great step in the right direction for the district.”