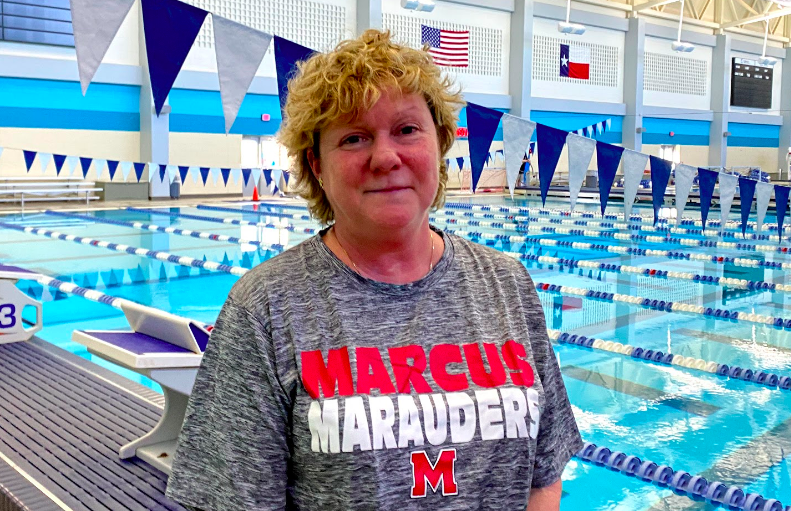 Swim coach Shannon Gillespy had a qualifying time for the 1980 Olympic swim team, but they never got to compete because of the boycott. She was chosen to be an Olympic coach in 2012.

Every day at 4:45 a.m., swim coach and natatorium manager Shannon Gillespy is greeted by the smell of chlorine as she steps into her office at the LISD Westside Aquatic Center.

A large window takes up the back wall, looking out to the pools that swimmers will be diving into at 6 a.m. sharp. Binders with labels such as “distance training” and “physiology school” stand up neatly on a bookshelf.

A white flag with the 2012 Olympic rings hangs on the wall opposite of the door, making it one of the first things Gillespy notices when she walks in. Numerous signatures are scrawled across the fabric in black ink. More mementos from her swimming and coaching career are placed throughout the room — a London 2012 pin, a USA swimming flag, framed photos of Michael Phelps and Ryan Lochte.

In Gillespy’s office two worlds collide, capturing her roles as both a high school and Olympic coach. However, nothing there recognizes her for being on the 1980 Olympic team because she and the rest of the U.S. team never got to compete.

Gillespy stood on the starting block in front of the pool, nervously staring at the water. The buzzer signaled the start of the race and Gillespy dove in like she had countless times before.

She stared at the black line at the bottom of the pool as she swam. Gillespy had been chasing that line for 15 years, starting out in classes at SMU when she was 5. Gillespy started competing three years later and found her way back to the SMU pools as a student athlete. As an upcoming sophomore, she was training for four hours a day, six days a week. She even spent Christmas in the water. All with the hope of going to the Olympics.

“It’s something that you work all your life for, and then you’re there on that stage all of a sudden,” Gillespy said. “That’s why it’s nerve wracking. You worked all this time for it and then you’re here.”

But Gillespy didn’t think about any of that. She didn’t have to.

Muscle memory took over as Gillespy swam lap after lap, allowing her mind to run wild. She sang “Stairway to Heaven” to herself, just like she always did in training. When the song picked up speed, Gillespy began swimming faster.

Yes, there are two paths you can go by

But in the long run

There’s still time to change the road you’re on

When she finally hit the touchpad and looked up at the scoreboard, she knew that her time was high enough to qualify for the team, but it didn’t matter.

Gillespy already knew that she wouldn’t end up at the games in Moscow. A week earlier, her coach told her that the United States wouldn’t be sending any athletes to the Olympics as a protest to the Soviet invasion of Afghanistan.

“[It was] disappointing, but… we knew it was coming six months in advance,” Gillespy said. “With all political things that were going on in the world at that time, that was inevitable.”

Gillespy pushed away the negative thoughts that came to mind as she climbed out of the pool. She wasn’t there to qualify for the team. She just wanted to know that she would have achieved her dream.

“Inside, you’re always angry. How can somebody take that away from you when you work so hard all your life?” Gillespy said. “But I think it got to a point where it is what it is.”

Gillespy never watched the other swimmers from around the world compete in Moscow and rarely discussed how close she was to racing alongside them, because to her, it simply didn’t matter.

She returned her focus to the black line, continuing to swim throughout college and after graduating before starting her family.

“It was just another thing that happened, and there’s nothing you could do about it,” Gillespy said. “So move on.”

Soon after the 1980 Olympic Trials, Gillespy decided to retire from competitive swimming and not go after a spot on the 1984 team. She had already started a family with her husband and knew it was time to leave that chapter of her life behind.

However, Gillespy never strayed far from the water. She began coaching swimming and started working at Marcus in 1987. Gillespy moved to Florida two years later but rejoined the school’s coaching staff in 1994. She hasn’t left since and has made a name for herself among swimmers and coaches alike.

“All of the swimmers respect her because they know that she’s an amazing coach and was an amazing swimmer, so she definitely holds a lot of power and respect,” senior Maysen Hauck said.

Although her competitive swimming days were over, Gillespy never let go of her Olympic dream.

“It didn’t happen, so I needed to work harder to fulfill my dream and I did,” Gillespy said. “If I can’t go as an athlete, I work hard to see if I can get there as a coach.”

In 2004, Gillespy started coaching for USA Swimming and ran camps all over the country. Although she had spent her whole career working in pools, Gillespy shifted her focus to open water swimming, which is in outdoor bodies of water, such as lakes. She acted as the manager of the USA World Championship Open Water Swim Team, and in 2011, Gillespy finally achieved the goal she set as a kid when she was asked to coach at the 2012 Olympics.

“I was giddy. Jump-up-and-down giddy, but I didn’t let anybody know,” Gillespy said. “My dream had come true and again. My hard work and determination actually paid off.”

Gillespy ran down the stands and to the edge of the water with the rest of the coaches, watching as American swimmer Haley Anderson neared the end of the 10 kilometer race. She was neck to neck with Hungarian swimmer Éva Risztov with the gold medal on the line.

The crowd cheered as the athletes swam under the sign marking the finish line. The final times were announced immediately, with Anderson behind Risztov by only 0.4 seconds.

But the color of the medal didn’t really matter to Gillespy. Anderson’s second place finish secured the first medal won by an American open water swimmer.

When Gillespy returned to Texas after the Games ended, she made an addition to her office — a framed white Olympic flag signed by the team members. Six weeks later, her Olympic ring came in the mail. To Gillespy, owning these objects was surreal.

“The whole experience was an amazing experience of a lifetime,” Gillespy said.

Gillespy is known for being a tough coach that produces champion swimmers. Her athletes have been high school state champions, college recruits and Olympic Trials qualifiers. In 2010, she won the Glen S. Hummer Award, which is given to the person or group who makes the greatest contribution to open water swimming.

“She’s very passionate, that’s for sure,” sophomore Molly Patrick said. “She loves distance, so she always says, ‘Swim, swim, swim. That’s the only way you can get better.’”

Gillespy is planning on retiring in two or three years and hopes that in her time coaching the Marauders, she has taught them more than how to swim.

“The swimmers that I’ve coached give me great happiness,” Gillespy said. “I tried to instill their life skills as champions in whatever they do. I would like to hope if they were to walk through the door today, it would be, ‘You taught me the discipline that I needed to be a banker, be a trader, make money, be a millionaire.’”

The discipline that Gillespy teaches her athletes is what helped her achieve her dream 32 years after it was taken away from her. But when asked if she’d ever change what happened at the 1980 Olympic Trials, she looks around her office, glancing at the flag hanging on the wall.

“I have fulfilled the dream,” Gillespy said. “I’ve enjoyed the ride. Like I said in 1980, move on. We’re good to go. Move on. I’m happy with the accomplishments. I’m happy with where I am right now.”