Top of the pyramid 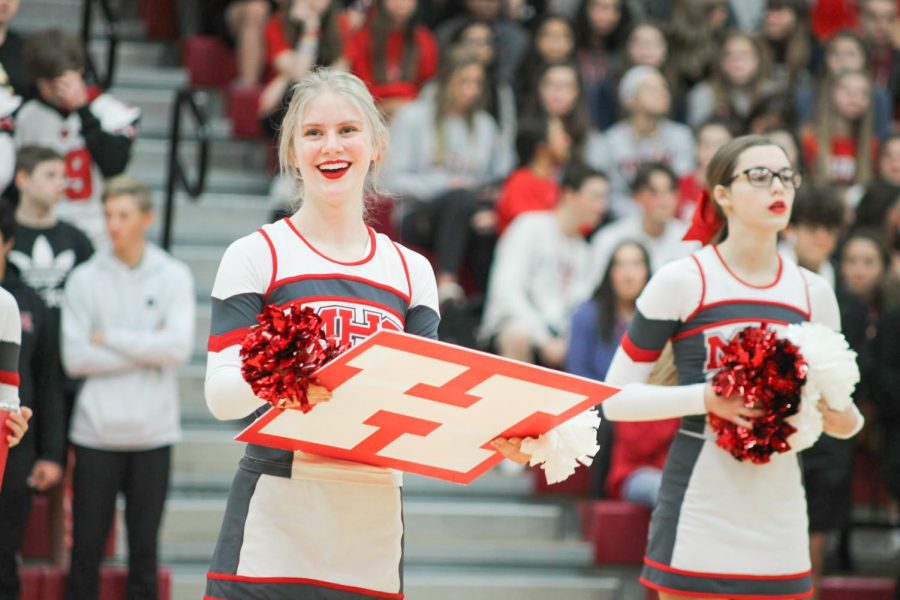 Senior Kaitlyn Reichenberger was part of the varsity team that placed second at nationals. She performed their nationals routine for the last time at their pep rally on Nov. 22.

The cheerleaders circled together, tightly holding hands and watching from backstage as the team before them performed at NCA nationals. After sharing motivational messages and saying a prayer, they spun themselves out of the circle and hugged.

Senior captain Riley Schmidt counted off “five, six, seven, eight.” The team responded back in unison “Be one comp team.” This chant reflected their desire to move as one person in every competition.

The lights of the Dallas Convention Center arena flashed on as the team walked on stage to perform their routine. They had been preparing for their Feb. 2 performance since September, practicing six to eight hours each week to perfect each skill and stunt.

“I was stressed because we all wanted to do really good, and being a senior, it’s my last chance,” senior co-captain Emma Francis said.

Everyone was following the choreography perfectly, just like how they performed in the warm up room, until junior Yasmeen Siddiqi fell. she slipped off of senior Bella Whitesell’s shoulders while doing a shoulder stand.

All Siddiqi could think about was getting up as fast as she could so she could continue the routine. She was dedicated, regardless of how she could have been injured. She sat herself on top of Whitesell’s shoulders and the routine continued smoothly. The rest of the team was unaware that the fall happened.

“You can’t really think about your pain,” Siddiqi said. “You just have to keep smiling and pushing through.”

Her perseverance isn’t something uncommon in cheerleaders. The popular Netflix documentary “Cheer” has shown audiences how passionate they are and how they strive to make dangerous stunts look perfect for a two minute and 30 second routine.

“I didn’t want to be the person that ruined it for the rest of the team,” Siddiqi said.

The cheerleaders waited for their results after their performance.

The announcers began to list off the places of the 29 teams. After every 10, they would let the teams go.

The cheerleaders sat together on stage in a circle, holding hands and waiting to find out if they were first, second or third.

“With a score of 96.733, second place Marcus High School,” the announcer said.

The cheerleaders began to cry from excitement. They shot up, hugging each other and giggling. It was their first time coming to the National Cheer Association national competition. They had also won an award for best use of props.

“I was really just happy that all of our hard work had paid off,” Whitesell said.

As head coach Brittanee Brown collected the results, she saw that the team’s score was not deducted because of the shoulder stand fall due to their quick recovery.

“I just was really happy that the kids could feel success when we were all so nervous that that was going to affect us,” Brown said.

Francis believes that the team’s self-motivation also played an important part in helping them get second place.