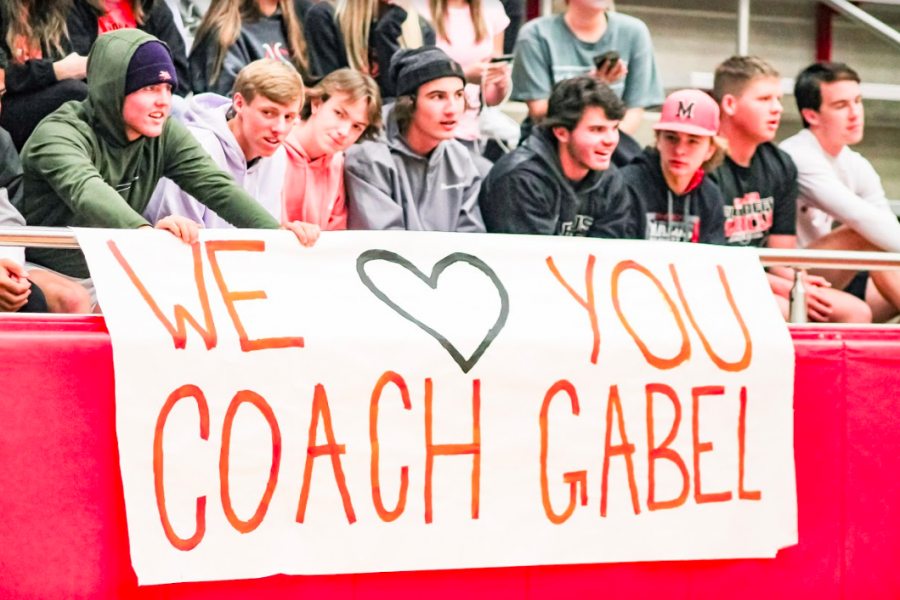 Posters were hung around the school to announce the game and honor golf coach Kerry Gabel. Coaches and members of the boys teams cheered on the girls during their game, and also had a game afterwards to support Gabel.

Golf coach Kerry Gabel was honored for his fight with kidney cancer at the Lady Marauder Basketball game on Feb. 4. The annual Cancer Night is organized by the Lady Marauder basketball coaches. They pick a different member of the community each year.

“This time we kind of wanted to honor one of our own and help them out,” girls basketball coach Monica Peña said.

Peña met Gabel through his daughter Kendall who is on the freshman girls basketball team.

“You can tell he’s a family man. You can tell he does a great job with those golf kids,” Peña said. “He’s very polite. Everyone here that I’ve met speaks very highly of him.”

During halftime, Gabel and his wife Jessica stood on the court wearing shirts that were being sold as a fundraiser for him. In front of them a video flipped through family photos and clips of an interview with the couple.

After the video, Gabel received a standing ovation from fans of both teams and gave a short speech.

“I can’t put into words the gratitude that my family and I have for this school, this community, and the people we have gotten to know and be around,” Gabel said. “We’re very thankful and appreciative for helping my wife and my family out in this time. It’s tough but we’re getting through it.”

Gabel was diagnosed with kidney cancer in 2016, after he was rushed to the hospital because of a sharp pain in his side while playing golf. There is currently no cure for kidney cancer, but Gabel has gone through multiple clinical trials, surgeries and radiation treatments.

The school has hosted multiple fundraisers in honor of Gabel, such as the creation of a GoFundMe, a “Fighting Back #together” t-shirt sale, a live auction for a gift basket at the game and a partnership with Mary Kay. All of the proceeds from each fundraiser went to Gabel and his family. The GoFundMe has currently raised $7,970.

“He comes to work every day, and you wouldn’t know that he’s dealing with this unless someone told you,” Peña said. “He lives his life to the fullest. You can tell he doesn’t want that to hold him back and that’s definitely inspiring.”

Gabel’s daughter Kendall sat in the bleachers along with the other players on the freshman girls team. Some members of the boys basketball team also attended the game to show support.

“I was just kind of processing it. I wasn’t even thinking about anything. It was kind of like my life was on a screen for a moment,” Kendall said, “It was a lot of attention for a moment, but it was a good attention.”

Assistant golf coach Matthew Schwolert is inspired by Gabel for his passion for family and teaching golf.

“He calls golf his ‘second family,’” Schwolert said, “[It’s] his desire to be a great coach and a great leader, and give his players and his family the best opportunity to be successful.”

Schwolert says that the event means more to Gabel than his own personal fight with cancer.

“For coach, it’s bigger than that, it’s for all the people,” Schwolert said, “What he has gone through mirrors what thousands of people go through. For coach, it’s never been ‘I want your sympathy.’ It’s always been about him just going day to day and living with it.”