Let’s get ready to tumble 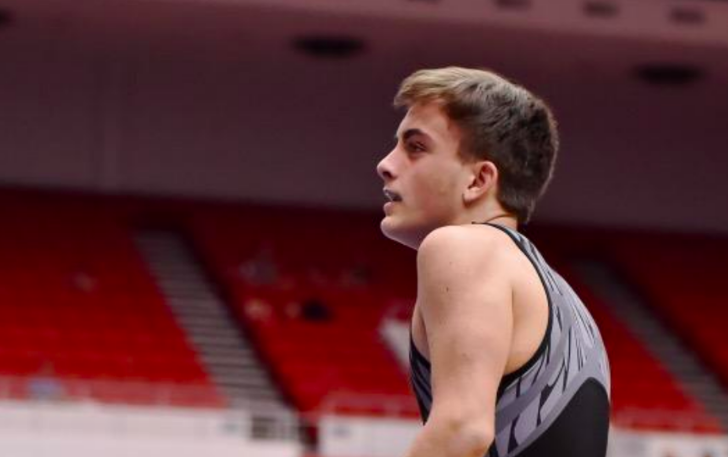 Senior Quinn Maguire competes for Winkids in Tumbling and Trampoline. He also coaches children of all ages, from toddlers to high schoolers.

The arena is half-full with spectators there to see the tumblers. The place is filled with the sound of feet hitting the trampolines, and competitors practicing their routines on the floor.

Senior Quinn Maguire has to focus on his routine and block out the noise. He’s done this routine a thousand times in practice-If he can just maintain control he’ll be fine.

It’s all in his head, but he can’t seem to get out of it.

The little voice in the back of his mind won’t be quiet.

You can mess this up.

Ignore it, Maguire says to himself.

The heads bounce as he jumps on the trampoline.

People will see you if you mess up.

Feel the air around you.

Maguire was introduced to trampoline and tumbling, or T&T, when he was three. He loved to bounce around as a child, so his mom enrolled him in some introductory classes. Soon enough, Maguire fell in love with the sport and the feeling of flying through the air.

In the sixth grade, Maguire decided to join competitive T&T when his gym, WinKids, started a team. For him, T&T comes with many highs and lows. As he’s grown up, the reality of injuries and the stress of succeeding in comparison to his peers has started to hit him.

“There is pressure. It stresses me out to compete sometimes,” Maguire said.

The fear of injuring himself or underperforming gets to his head, and it sometimes causes him to mess up a skill he’s good at. Maguire’s favorite event is the double-mini, but when he gets nervous, he’ll add in another twist and suddenly the routine he’s been working on for months won’t do well. A missed landing can be the difference between first and last place.

“I put all of this pressure behind it, and then it doesn’t seem fun anymore,” Maguire said. “You have to just remind yourself that you’re supposed to be having a fun time.”

He spends about 25 hours in the gym training and coaching every week. As Maguire has grown older, he’s found that practices can be difficult to manage with the increasing load of school work and volunteering.

Along with competing in his own events, he spends more time at the gym coaching children from toddlers to high school students.

“It’s insane, I don’t even know how he does it,” Maguire’s coach, Jack Lee, said.  “He’s making straight A’s and… he’s doing [T&T]. I don’t see him studying a lot here because he’s working and he’s putting his efforts here, but I honestly don’t know how he manages to juggle it all.”

Maguire is one of two original T&T team members who have stayed. Maguire had shown a lot of dedication to the sport and spent a lot of time at the gym, so he began to take on more responsibility as he grew older. It seemed natural for him to coach, so when he was asked to join the gym’s staff in the summer before his sophomore year, Maguire gladly took the position.

Through coaching, Maguire has had to learn how to change how he views tumbling. Since athletes have to be very mindful of their position and body in T&T, he has to describe a skill in a variety of ways to make sure his athletes grasp the concept. He notes that it can be a “challenge” to switch from competitor to coach because instead of carrying out the skills, he has to find a way to make the skills make sense to his students.

“I’ll think of it one way, and sometimes they don’t understand the way I’m thinking of it, so I have to just change my wording or change different ways of perceiving the skills so that it gets across,” Maguire said.

He enjoys the ability to see the children progress as he continues coaching them and hopes to transfer the skills he has learned and developed to his students.

Lee says that Maguire’s patience and dedication to the sport not only make him a successful athlete, but a great coach.

“He’s just a really good example of what is possible for those kids. He wasn’t the most athletically gifted kid or the strongest kid or the most flexible kid, but he was the picture of diligence, and he just put in the work,” Lee said. “It kind of motivates them.”

In the two years he has coached, Maguire has seen many kids grow up in the gym and wants to be a role model to the athletes.

“I like when I do skills and they see me, because it’s like, ‘Oh, look what you can become if you keep on practicing,” Maguire said.

Because he joined T&T, Maguire was introduced to a sport he loved, and he has been able to see how by coaching, he’s able to impact and shape the passion others have for the sport.

Maguire is still working on the mental hurdles that come with such an injury-prone sport, but he hopes to teach his students the importance of practice and commitment.

“If I had to give a message to them, I would just say don’t lose faith, or always be confident in yourself,” Maguire said. “It is just a sport. You’re supposed to be having fun.”