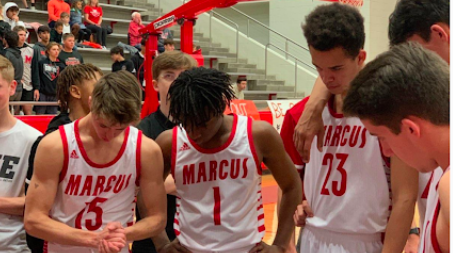 The boys' varsity basketball team huddles around head coach Shane Rogers as he discusses the game. The Marauders lost to the Flower Mound Jaguars 66-51.

The boys’ varsity basketball team came up short 66-51 against their cross-town rivals, the Flower Mound Jaguars, at their game Tuesday night.

However, the Marauders found themselves down 11-4 with about four minutes left in the first quarter. They then went on a 9-5 run, ending the first with the Jaguars in the lead 16-13.

The second quarter was similar to the first and the Marauders kept finding themselves behind Flower Mound, who ended the second with a 32-28 lead.

Both of the teams amped up their defense going into the second half. In the third quarter, the Marauders pulled ahead for the first time of the game and only gave up 14 points, which was the lowest number the Jaguars scored in a quarter. However, Flower Mound pulled ahead again and ended the third on top 46-40.

The fourth quarter was a different beast to tackle. The Jaguars scored 20 points in the quarter alone, which was the most in the game, while the Marauders scored the least with 11 points. The Marauders cut the lead to make it close multiple times, but the Jaguars came back with a three pointer, shifting any momentum the Marauders had. In the end, the fast-tempo Jaguars won 66-51.

The Marauders will take on the Irving MacArthur Cardinals tonight at 8:00 p.m. on the Cardinals’ home court.