Swim team kicks off their season with Ranger Relays 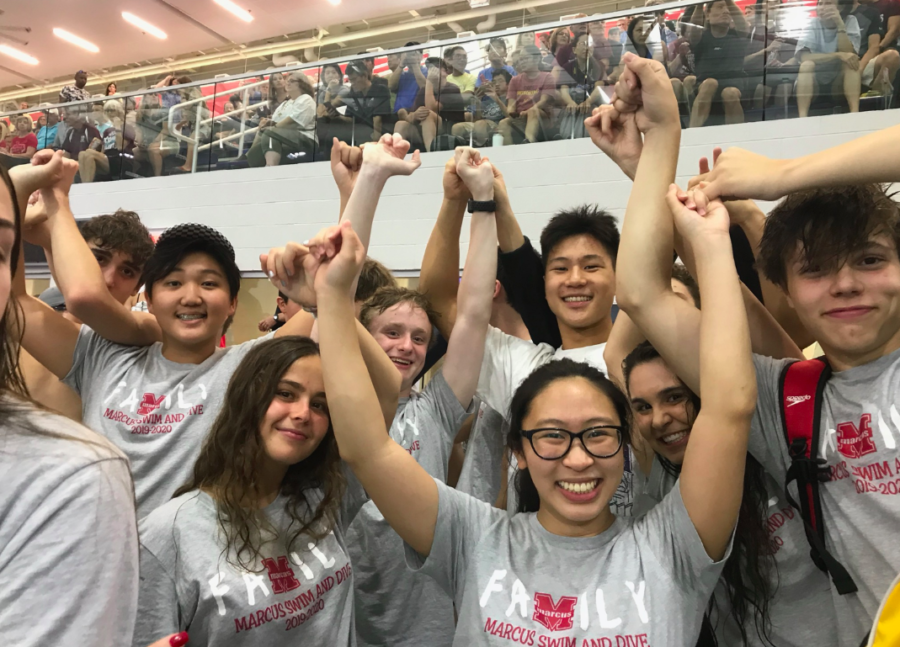 The swim team holds pinkies as they wait for the shootout to begin. At the beginning of big races, the athletes will join together in anticipation and support of their teammates.

On Sept. 28, the swim and dive team competed at the annual Ranger Relays at the Robson and Lindley Aquatics Center, Southern Methodist University. Thirteen schools competed in the meet, which was comprised solely of relay events. The Marauders have been kicking off their season with the Ranger Relays for the past 11 years. The meet sets the tone for a year of racing and team bonding.

“We [have been] there from the beginning,” Coach Shannon Gillespy said.

Ranger Relays allows teams to race as groups in a variety of events, making it different from typical high school meets where only three out of the 11 events are relays. The rest of the events are individual, so swimmers compete against their teammates. In relays, swimmers are able to work together to beat other competitors, which can help teams build their spirit.

A defining event at the annual meet is the shootout, which is a relay composed of eight teams with seven swimmers each. The competitors race in heats that are separated by gender. An athlete will swim 50 yards of freestyle, and after each round, the slowest team is eliminated until there is a winner.

The pool deck buzzes with excitement during the event. A lot of competitors and coaches consider the shootout to be their favorite part of the meet, including junior Cole Conrad and Coach Brandon Dion.

“It’s just fun to watch [the team] race against other schools,” Dion said.

Before the Marauders dive in the water for the shootout, the team holds pinkies in support of their teammates. After the race starts, the deck lights up with the sounds of excited swimmers cheering on their teammates.

“The shootout is so exciting,” senior Annette Ngyuen said.  “We have seven swimmers who swim the 50 free, which is the fastest sprint event. And we’re all just up and cheering, rooting for our team to make it to the end.”

In the past four years, the team has grown from 40 athletes to 90, and although it is a challenge to fit everyone in the limited lanes, Coach Shannon Gillespy is making it work so the team does not have to be split into two class periods.

“I want to have a great season,” Gillepsy said. “I’m excited that we have so many swimmers. I just love to see my athletes grow in camaraderie with each other.”