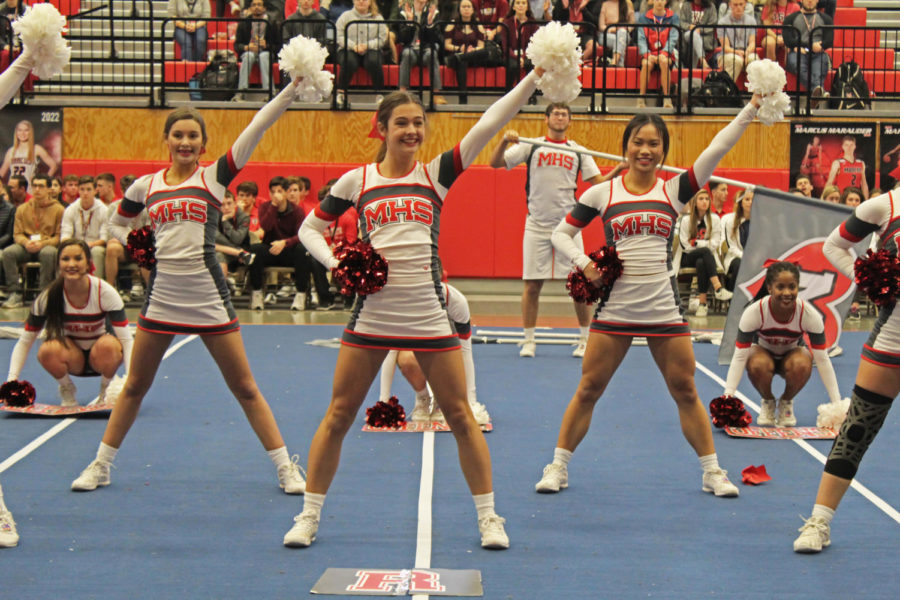 Sophomore Erin Bookout, junior Celine Toias and senior Ivana Tieu perform the second place routine at a pep rally. The cheerleaders don’t perform full routines at events like football games, so the pep rally was an opportunity for the team to show off their hard work to other students.

Cheers erupted through the crowd as the cheerleaders ran out onto the competition floor to prepare for their performance in February. They pumped up the crowd, jumping and shaking their pom poms.

They had performed their routine countless times before, and now they were finally at Nationals. They just had to hit it perfectly one last time.

“We were kind of laughing and joking around backstage to loosen up the nerves, so going onto the floor, I honestly just felt at home,” senior cheer captain Alesia Dixon said.
Marching band music blared out of the speakers as the cheerleaders began, chanting along with the music and executing perfectly synchronized jumps.

Coach Brittanee Brown proudly watched the athletes she had trained for seven months hit each portion of their routine.

“I was up there in the sound board, just looking down at them and watching them nail it,” Brown said. “I finally felt like they were just having fun on the mat.”
As the cheerleaders hit their final poses, the crowd erupted into applause as they ran off the floor.

“The choreographers and our coach were right there on the bottom giving us so much energy, yelling with us and cheering us on, and our parents were yelling with us and holding up signs,” Dixon said. “Just being on the floor and performing it, I was very proud of us.”

Hours later, they stood together, eagerly awaiting their placement. They barely made it into finals, sitting in last place out of the 16 teams that qualified.

“The feeling waiting for awards is just so nerve wracking and crazy,” junior Riley Schmidt said.

The cheerleaders held their breath as the announcer said the name of another high school, sending a wave of relief over them. They weren’t last. The announcer continued their way down the list, anticipation building with each name.

When they weren’t announced, they group turned to look at Brown, knowing they were going to be in the top ten in the nation.

The cheerleaders felt giddy as they realized that they must be in the top five.

They couldn’t believe it. They were going to be one of the top three teams in the nation, a title they that seemed impossible a few hours earlier. “Second place… “
When the announcer called “Marcus,” they felt nothing but pure excitement.

“Once they called second place, we weren’t even sad about not being first. We were just so excited,” Brown said. “It was our first time to ever go to that competition as Marcus Cheer, so we were just very, very excited that we went in and grabbed a silver medal.”

The road to nationals wasn’t easy. The cheerleaders began learning their routine in September, when they spent a day with a choreographer from 9 a.m. to 5 p.m. to learn the three minute performance.

After they competed at regionals, the choreographer came back and fixed the judges’ recommendations. The process was repeated after the state competition to ensure that the group was ready for nationals.

At state, the team scored high enough to get sixth place. However, a time deduction knocked them down.

“We never worried about time before,” Schmidt said. “It was really hard to hear that we could’ve gotten sixth but because of our time it brought us down to eleventh.”
The team viewed this as a second chance to prove themselves and showcase their skills.

“It really just fueled the fire to know ‘okay, we can do better than that,’ and I think that’s what really helped us get second place in nationals,” Dixon said. “We know what it’s like to place really well and we didn’t want to not feel that again because of something minor.”

Despite their determination to perform well, the cheerleaders’ mindsets shifted beyond just winning.

“I notice that they’re just more eager to have a good time and just go out and show their skills and they’re not as worried about beating all these other teams,” Brown said.

When February came, the team traveled to Orlando, Florida to compete in the national competition, which was hosted at the ESPN Wide World of Sports on Disney property. They were greeted by the best teams from across the country, all fighting for the top placements.

“When you’re there you know that you’re not able to look at a team and automatically eliminate them,” Brown said. “So the energy is very high and everybody is very excited, but everyone that is there is very serious about cheer.”

The cheerleaders performed their final routine with nothing to lose, wanting to perform the skills they had been training for so long the best they could.
“What we wanted to do was leave everything we had on the mat. You don’t want to have any regrets,” Schmidt said.

Despite their hours of preparation, Schmidt’s sign broke mid-routine, forcing her to perform the rest of the routine holding both pieces up in the air before deciding to drop one and just hold up half of the prop. At first, she didn’t know what to do, but the encouragement of her coaches and choreographers gave her the confidence to keep going.

“At first it was fear, but then I got super confident with it and was like ‘I’m just going to go for it,’” Schmidt said.

Schmidt believes that their second place win helped them gain respect from others. She thinks that they don’t fit the mold of stereotypical high school cheerleaders.

“One of our big things is that we want people to respect us and not just see us as the cheerleaders, the popular, the mean,” Schmidt said. “We really want to change that name and I feel like we’ve gained a lot of respect this year.”

In addition to the respect they’ve gained, the cheerleaders were excited to finally see all of their work finally pay off.

“It was beautiful to just watch them open up and become this beautiful group of kids that just finally tapped into what it feels like to be successful,” Brown said.