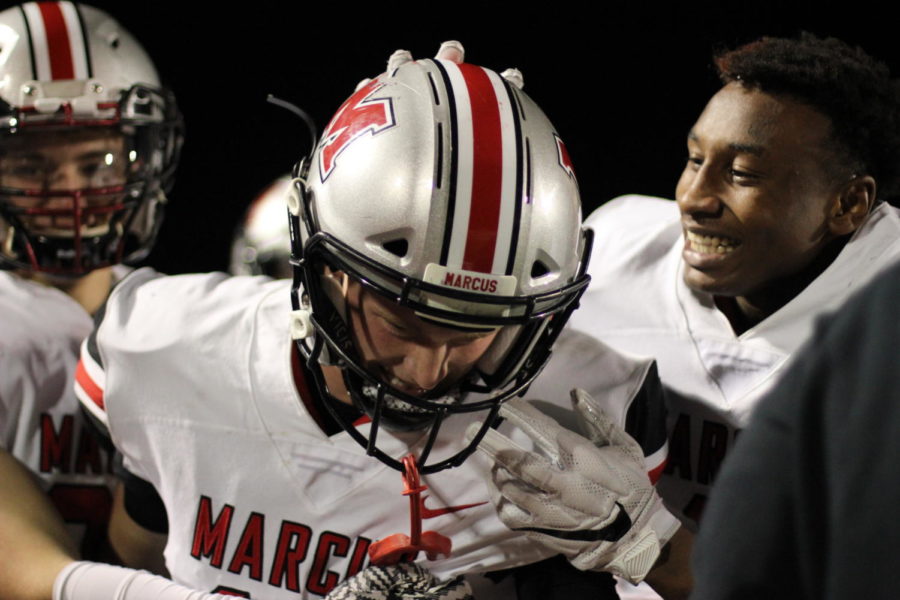 The Marauders made their season record 5-4 after breaking a three game losing-streak with their victory over the MacArthur Cardinals. Overall, the team is pleased with their most recent win, and are ready to focus on the upcoming Battle of the Axe game against the Lewisville Fighting Farmers.

“We executed well on offense and defense and special teams, and I was happy to see that,” Head coach Kevin Atkinson said. “We didn’t start real fast offensively tonight, but we beared down and got the job done.”

The game got off to a rough start after a Marauder fumble was returned for a Cardinal touchdown within two minutes of starting the first quarter. The red and silver remained scoreless going into the second quarter, while the Cardinals kicked a field goal to put them up by 10. Senior wide receiver/linebacker Marcel Brooks answered with two consecutive touchdowns for the Marauders, while senior kicker Matt Heffernan kicked a 27-yard field goal to put three more points to the board. The red and silver then increased their lead with a 67-yard touchdown fumble return by senior defensive back Sean Watson, making the score 24-10 at the end of the first half.

“It was a rush,” Watson said. “I don’t remember that much about it. I’ve never scored before, I was just trying to help out the team, and that’s what I did.”

The Cardinals remained scoreless in the third quarter, while Heffernan made his second field goal of the night making the score 27-10 going into the fourth. An 8-yard touchdown run by junior Ty’son Edwards was the last scoring play of the night for the Marauders. The Cardinals managed to get one more touchdown in the final minute of the game, but it wasn’t enough to overtake the red and silver’s lead. 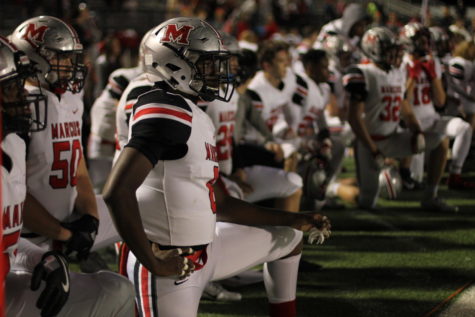 Offensively, the Marauder running game lead by Edwards and Brooks was the main source of scoring plays. Edwards rushed for 206 yards earning one touchdown, while Brooks rushed for 57 yards for two touchdowns. Meanwhile, Brooks had the most receiving yards of the night, totaling 70 yards, while senior wide receiver John Ballard totaled 35 receiving yards.

The red and silver defense forced three turnovers, two fumbles-one returned for a touchdown by Watson- and an interception by senior defensive back Boomer Perry. Overall, th

e defense held the Cardinal’s running game to 2.8 yards per carry, however, found it more difficult to stop the passing game, especially with starting senior linebacker Jabril Darr out with an injury.

Spirits were high among the players and fans after the much-awaited win on Thursday night. Three winless weeks had finally come to an end just before a big rivalry game against the Farmers at home on Friday, Nov. 9, at 7:00 P.M. To the disappointment of players, coaches, and fans, the Marauders’ hopes of making the playoffs will not be realized this season. However, the team is still focused on winning the against their cross-town rivals to end their regular season on a positive note.