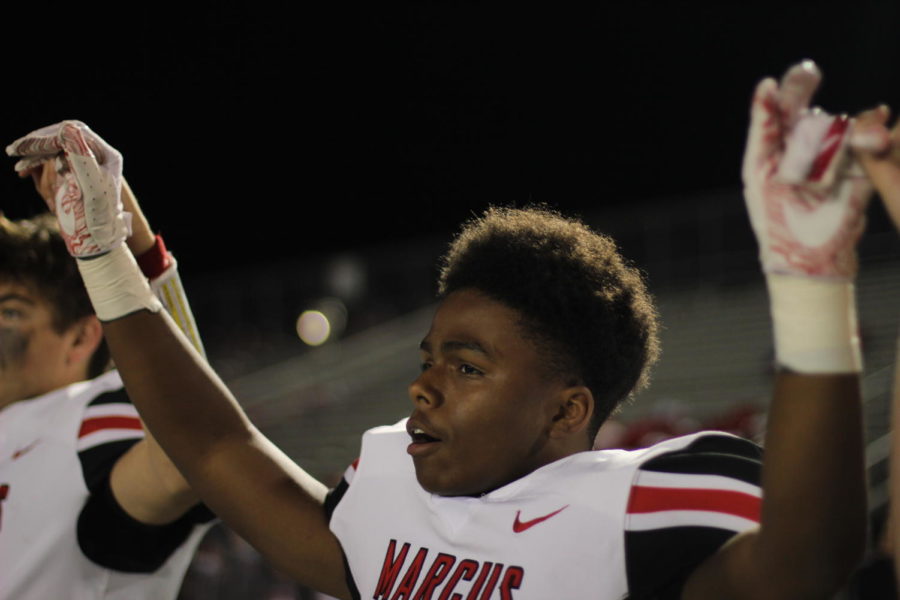 The Marauders dropped to fourth place in the district 6-6A rankings after the Coppell Cowboys kicked a field goal to gain a one point lead in the final minute of the game, from which the Marauders were unable to retaliate. The loss was particularly disheartening, considering that the red and silver went into the fourth quarter with a promising 13-point lead.

The first quarter got off to a slow start, with both teams exchanging punts on their first drives of the night. Then, senior running back Justin Dinka scored the first points of the game with a 50-yard touchdown run, making the score 7-0 at the end of the first. The Cowboys answered with a touchdown of their own in the second quarter to tie the score up. However, a touchdown pass from sophomore quarterback Garrett Nussmeier to junior wide receiver Evan Greene for 74 yards put the red and silver up 14-7 going into the half.

During the third quarter the Cowboys remained scoreless, while Dinka scored his second and final touchdown of the night with a one yard run. The PAT, however, was unsuccessful, making the score 20-7 going into the fourth. Despite an impressive first three quarters, the Marauders were unable to hold onto the lead in the final minute of the game. The Cowboys put two touchdowns on the board, while senior kicker Matt Heffernan kicked an 18-yard field goal, giving the Marauders a 23-21 lead. It was in the final minute that the Cowboys made a 52-yard field goal, giving them the one-point lead that would ultimately lead to their victory.

Overall, the red and silver offense had a solid first three quarters, averaging roughly 13 yards per pass and four yards per carry. They outmatched the Cowboys in pure passing and rushing yards, with Nussmeier passing for 225 yards and Dinka rushing for 85. Greene was the top receiver of the night, receiving for 96 yards. And while the 18-yard field goal by Heffernan helped keep the Marauders in the game until the final minute, the missed PAT in the third quarter (in addition to other factors) made the team vulnerable to the Cowboys’ game-winning kick.

Defensively, the Marauders experienced a successful first three quarters, allowing only one touchdown run. However, after three quarters of constant pressure from the Cowboys’ offense due to multiple unsuccessful Marauder offensive drives, the defense was unable to keep up by the time the fourth quarter came around. Despite a tough fourth quarter, the defense did recover a fumble by the cowboys, giving the offense another chance for a scoring drive that was ultimately unsuccessful.

The game was a tough loss, however the red and silver have turned their sights to the Mound Showdown game against town rival Flower Mound Oct. 26, at 7:00 P.M. at home.