From legacy to leader 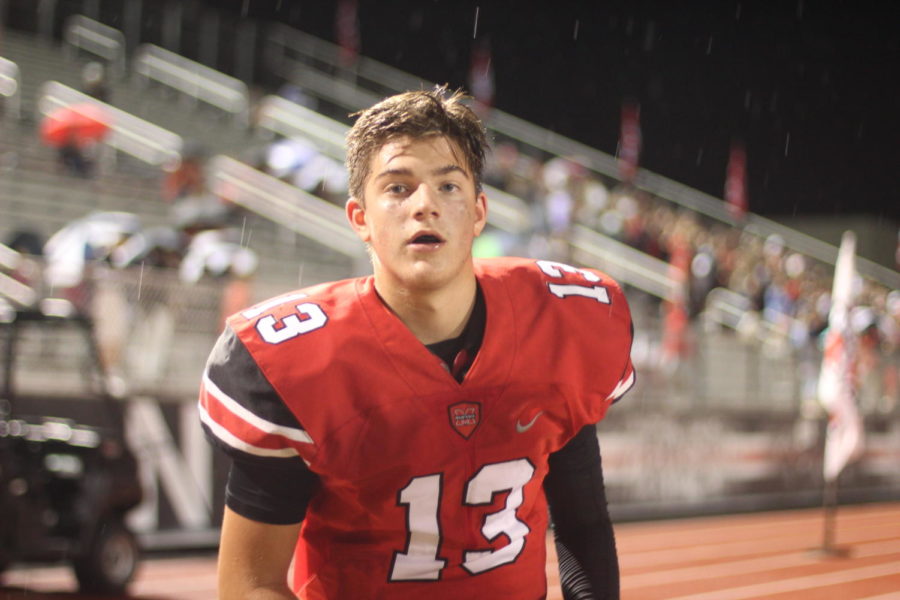 After a 90-minute rain delay, sophomore Garrett Nussmeier stood on the slippery turf of the football field, ready for the snap. He could see rain falling in the glow of the stadium lights. The water droplets clung  to his helmet. The sound of the cheering crowd seemed like background noise as his focus narrowed.

Nussmeier called the play. The center’s snap was caught, His eyes scanned the field for his options. With his arm cocked to throw, he saw a wide receiver downfield. With a swift motion,  the ball spiraled into the hands of his teammate. The crowd erupted as the receiver reached the end zone for one of six touchdowns. When the game ended, Nussmeier walked away with his first win as the starting varsity quarterback.

“The hardest part about playing football is being able to go 100 percent every single play and every single snap,” Nussmeier said. “That’s also one of the most beautiful things about football is that you have to give that effort on every play.”

To Nussmeier, football isn’t just a sport, it’s a legacy. His dad, Doug Nussmeier, the current tight end coach for the Dallas Cowboys, has been coaching since Nussmeier can remember. Before that he played in the NFL as a quarterback for the Saints and the Colts.

However, his dad’s football career isn’t the only reason Nussmeier wanted to play football. Since he was 5, Nussmeier was inspired by those his dad coached.

“Football was the center of our lives,” Nussmeier said. “I’d look up to my dad’s players, and I just wanted to be like them.”

His dad’s career has caused the Nussmeier family to move nine times. With each move, Nussmeier joined a new team. Though he admits that the constant change was difficult, he recognizes that the experiences made him a stronger player.

Nussmeier said. “I’ve been around so many different teams that it’s taught me what the winning edge is, and what it takes to win. To be a winning team everybody has to be motivated to win and dedicated to what you’re doing and what you’re trying to accomplish.”

Nussmeier moved to Flower Mound last spring from Florida. He anticipated more intensity and support for a Texas football program than in Florida.

“The speed of the game is totally different here,” Nussmeier said. “I think playing 6-A ball here in Texas is like basically playing at a mid-major [college]. It’s really going to help me for the next level.”

Nussmeier often watches game film at home, in addition to practicing before, during and sometimes after school. This routine can be tiring, however, Nussmeier is thankful to have his dad to support him.

“It’s helped my knowledge of the game increase tremendously, because I have someone I can ask the questions I have on a nightly basis,” Nussmeier said.

Atkinson is impressed not only with the level of skill, but with the mindset and character that Nussmeier brings to the team. He knew that Nussmeier was right for the starting quarterback position the first time he met him.

“He’s a natural leader,” Atkinson said. “It’s hard to know what it is, but you just know it when you see it, and he has it.”

Over the summer, Atkinson saw Nussmeier embrace the leadership aspect of his position. It was Nussmeier who got the team together for unscheduled workouts weeks before the season started. Senior tight end Gus Sralla was at summer training, and has witnessed Nussmeier integrate into the football program.

“At first when Garrett [moved here]I wasn’t really sure about him, but after I got to know him he’s become my best friend,” Sralla said. “If you know the person next to you, it makes it easier to trust them. It creates a brotherhood.”

Not only has Nussmeier’s work ethic and skill inspired his teammates, but it has also attracted offers from LSU and Mizzou. According to Sralla, it’s a blend of mobility and accuracy that allows Nussmeier to make plays out of the pocket, and throw 51-yard passes directly into the arms of his receivers,

“If no one ever told me he was a sophomore I would not think it,” Sralla said. “He gets respect from the team by the way he plays.”

At the moment, Nussmeier’s goal is to make it to the play-offs. However, he ultimately wants to win a college championship and start in the NFL. Although he knows these are big aspirations, Nussmeier is confident that he will make it happen. Nussmeier says it’s his values that drive his ambition, and he can’t wait to see where his hard work and motivation will take him.

“I think everything I’ve done has been a learning experience, and piece-by-piece has slowly made me who I am, and I wouldn’t change anything,” Nussmeier said. “That’s probably the best feeling in the world, is to realize that all the hard work you put in is going to pay off.”