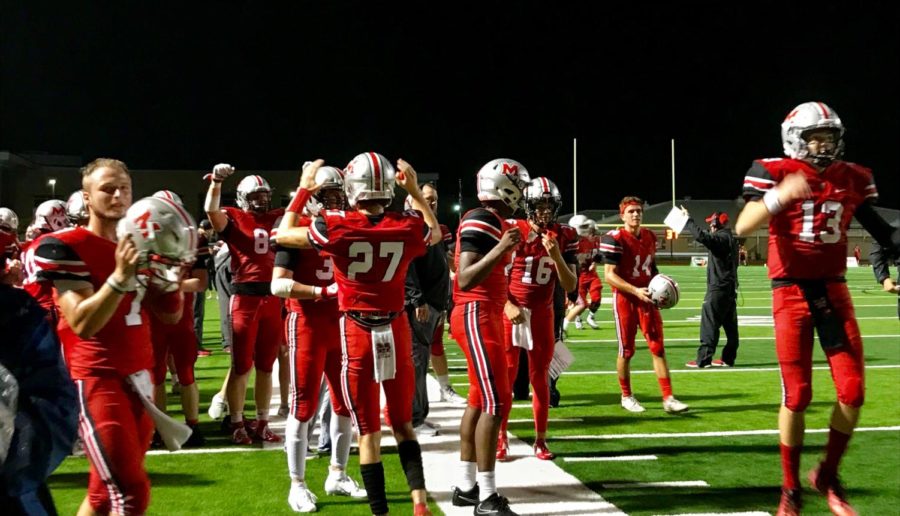 The Marauders began the game with two consecutive touchdowns in the first few minutes, which set the tone for their victory. Despite McKinney Boyd’s elusive running game, the red and silver were able to maintain their momentum, thanks to their physicality and clean execution, much improved from last game.

The Marauders racked up two unanswered touchdowns in the first quarter, both run in by senior running back #2 Justin Dinka. Boyd tied up the score in the beginning of the second quarter, with two consecutive touchdowns. The red and silver regained the lead, with Dinka scoring his third and final touchdown of the night, and senior quarterback #14 Carter Bir running the ball in for a touchdown, bringing the score to 34-14 at the half.

A touchdown pass from sophomore quarterback #13 Garrett Nussmeier to senior wide receiver #9 Marcel Brooks in the middle of the third quarter was answered with a touchdown by Boyd, leaving the score 41-21 at the end of the third. The Marauders were scoreless in the fourth quarter, while Boyd scored their fourth touchdown of the game. However, Boyd’s last-minute touchdown was not enough to overcome the 13-point gap earned by the Marauders in the first three quarters.

Head coach, Kevin Atkinson, is focused on gaining momentum from this victory, and attributes this vast improvement to the team’s hard work.

“It was a good game,” Atkinson said. “We want to get better every game, and we want our last game to be our best game.”

Offensively, the Marauder passing game dominated, with Nussmeier throwing for 206 yards, including a 51 yard touchdown pass to Brooks, who accumulated 151 receiving yards. The team totaled 52 rushing yards, with Dinka accounting for 27 of those. The defense played an aggressive game, forcing six turnovers overall.

For many team members, the game was a chance to prove themselves after a loss in their first game to Arlington Bowie.

“For everyone who doubts us, it’s our chance to show them what we’re about,” senior tight end #82 Gus Sralla said.

The Marauders will face Waxahachie in an away game next Friday at 7:30 p.m.