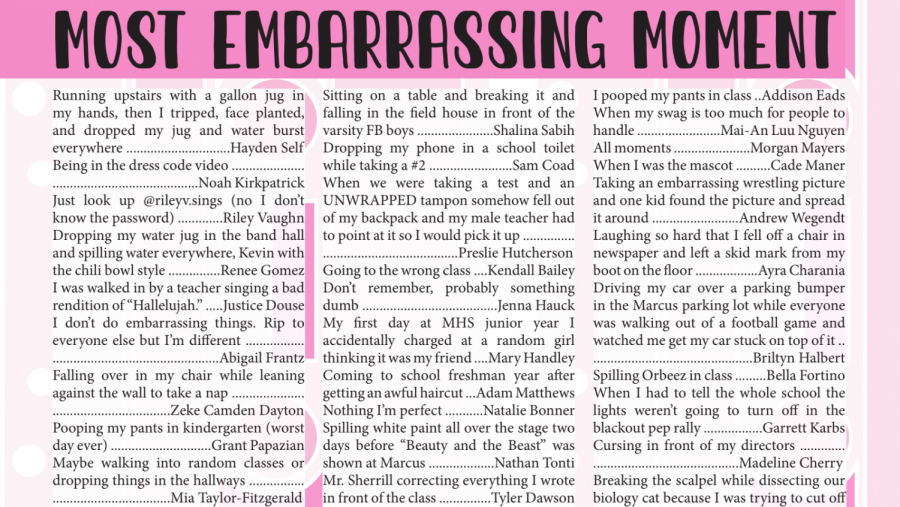 Seniors revealed their most embarrassing moments and more in The Marquee's senior edition, which is available on Issue.com.

These answers were part of our senior edition, which was released in May 2020. The full issue can be found here.

“Running upstairs with a gallon jug in my hands, then I tripped, face planted, and dropped my jug and water burst everywhere” — Hayden Self

“Being in the dress code video” — Noah Kirkpatrick

“Just look up @rileyv.sings (no I don’t know the password)” — Riley Vaughn

“Dropping my water jug in the band hall and spilling water everywhere, Kevin with the chili bowl style” — Renee Gomez

“I was walked in by a teacher singing a bad rendition of ‘Hallelujah.’” — Justice Douse

“I don’t do embarrassing things. Rip to everyone else but I’m different” — Abigail Frantz

“Pooping my pants in kindergarten (worst day ever)” — Grant Papazian

“Shalina Sabih friendzoned me sophomore year. I will never give up though” — Jadan Ruckdeschel

“Mr. Sherrill correcting everything I wrote in front of the class” — Tyler Dawson

“Falling down the stairs in 9th grade” — Lauryn Walters

“I pooped my pants in class” — Addison Eads

“When I was the mascot” — Cade Maner

“Cursing in front of my directors” — Madeline Cherry

“Breaking the scalpel while dissecting our biology cat because I was trying to cut off the toe (sorry Mr. Hinsley)” — Emily McLeod

“Too many” — Arianne Van Der Stuyf

“Getting called out for walking the halls” — Autumn Dodson

“Getting kicked out of cheer practice” — Bella Whitesell

“When I tried to deadlift in Crocs” — Michael Minton

“I peed my pants timing the mile in track. I am not a distance runner” — Tatum Green

“During a fire drill I was on crutches and it was raining outside. The whole school was already outside and watching as me and Dakota (who was also on crutches) struggle to get to where we needed to be” — Bailey Tadolini

“Sleeping through my last student council meeting ever” — Lauren Szlosek

“Getting a C in APUSH” — Marcus Anderson-Valencia

“HOCO Carnival-riding mechanical bull for nine secs, falling off and celebrating too early over my nine secs that the bull’s head swung around and hit me in the back of the head in front of my gf and friends” — Patrick Bevins

“Never knowing what school event was going on” — Nancy Benitez

“9th grade through 12th grade. Except for that one time Mr. Wilhite put me in a Kahoot as an option for ‘Who is Mr. Wilhite’s favourite student?’ and I got two votes including myself” — Hana Ajam

“That time I split my leggings entirely down the middle in Mr. Stoeberl’s class” — Riley Vaughn

“When my stunt fell during the patriotic pep rally” — Kaitlyn Reichenberger

“How could I possibly choose?” — Caitlin Kinder

“Forgot to bring a paper for AP World. Not fun” — Catherine McKisic

“Didn’t happen at school, but I was studying in the library with friends and farted REALLLLYYY loudly” — Carol Anne Starks

“When I passed out after the blood drive” — Adriana Pueskens

“Dislocating my thumb on my mom’s birthday” — Tatiana Beach