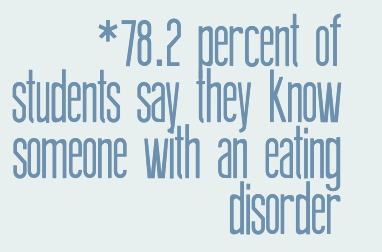 The standard of beauty is often seen in our society as a girl’s issue. However, from a young age, boys are pressured to look a certain way too. They are expected to be muscular, tall and lean. When they don’t possess these characteristics, some boys take extreme diet measures to fix their body, leading to eating disorders. Boys’ problems with eating disorders are just as important to discuss as girls.

Eating disorders are more common among boys than one might think. For example, male athletes can be asked to lose or gain weight to compete in a specific weight class. According to a study by the National Eating Disorders Association, 33 percent of boys in weight-class sports such as wrestling are affected by eating disorders.

In addition, the National Eating Disorders Association stated that males represent 25 percent of those with anorexia nervosa and are more likely to die than girls because they are diagnosed later. This late diagnosis happens because they are often overlooked. The focus on girls only is detrimental to boys. If they do not receive the help they need, whether medical or supportive, it could permanently alter their life.

Some may say that boys’ issues concerning eating disorders are smaller compared to girl’s and matter less because boys have not been sexualized as much as girls have, but this is not true. In a study of adolescents with eating disorders, 14 percent of those were likely to have avoidant restrictive food intake disorder (ARFID), similar to anorexia. With anorexia and ARFID you are restrictive with the food you eat. According to the National Eating Disorders Association, the majority of those with ARFID were young boys. This is generally ignored due to the stigma surrounding boys’ vulnerability.

Just because fewer boys are affected by beauty standards doesn’t mean they should be disregarded. It’s just as crucial to discuss boys’ eating disorders as girls’. If you have a loved one who is not eating enough, do not let it slip by. By doing nothing you could be allowing them to have a serious health issue.

Talk to them. Let them know that you are there for them. We are all human beings who were meant to look different. Loving ourselves is critical to our health and well being, and it’s also important to teach others to do the same.