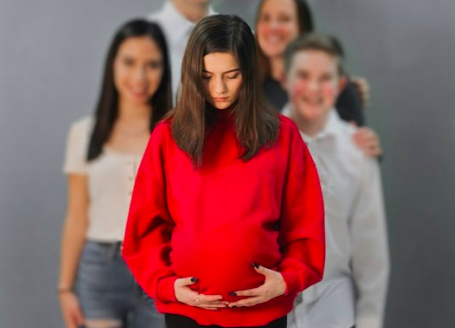 "All teenagers make mistakes in high school. However, unlike teen moms, most don’t live with the evidence of their mistakes. For teen moms there is no hiding, but by owning up to their actions and keeping their babies, these moms show a level of maturity that most teenagers gain much later in life."

Editor’s note: this editorial was named as an honorable mention for staff editorials in the TAJE Best in Texas contest.

In the 1960s it wasn’t acceptable to marry someone of the same sex, or someone of a different race. Divorce was frowned upon and teen moms were shamed. Now, in the year 2020, we are much more accepting of non-traditional lifestyles. The exception, however, is society’s view of teen moms. Though our generation preaches love and acceptance we, like our grandparents, often still throw out rude and disrespectful comments when we see a teen mom. We need to stop this judgmental, borderline bullying behavior and support the teenage girls who have chosen to keep their child.

Flower Mound, like every town, deals with teen pregnancy. According to the CDC in 2017 there were 194,377 teen births in the U.S. alone. All of us are aware that there are a large number of teenagers having sex, and the only reason these moms are getting shamed is because they are the ones that got caught. These moms need our support because they have weighed all of their options and made the difficult choice to keep their baby. They could have had an abortion or given up their baby for adoption. Instead they chose to raise a child, and shaming them is only causing harm.

Another reason these moms need support is because keeping their baby can lead to a difficult future. According to the National Conference of State Legislature, close to 60 percent of unwed teen moms drop out of high school and only two percent finish college by the time they are 30. With community support they will have a better chance at finishing their education and will be able to better provide for their child. While they are working on their education teen moms still have to find financial support as well, either from their parents or a minimum wage job. If they are working hard, then communities shaming these women is just adding to their stress. An example of support in our community is LISD allowing teen moms to continue to go to school on their original campus if they choose and also have the option of attending the School Age Parent Program available at the Lewisville Learning Center. This has been a good way to support these young women by easing their transition into parenthood.

On top of the stress that comes with being a teenager including school, friends and extracurriculars, these young mothers now have the added stress of taking care of another human being. Having a baby can bring unforeseen challenges for the mother and everyone involved, but tackling the situation head on shows strength. Choosing to keep their child shouldn’t determine whether we respect or shame them.

All teenagers make mistakes in high school. However, unlike teen moms, most don’t live with the evidence of their mistakes. For teen moms there is no hiding, but by owning up to their actions and keeping their babies, these moms show a level of maturity that most teenagers gain much later in life. If teenagers aren’t defined by the stupid mistakes they made in high school then teen moms shouldn’t be defined by their pregnancy. Treat them how you’d wish to be treated if your mistakes were out in the open like theirs are.

Teen moms need to be shown by the community that we believe in their worth and abilities. They deserve a community ready to help them through the obstacles they now have to face. Next time you see a teen mom, think back to your own mistakes from high school before you so quickly attack others for theirs. Let these moms know that they are still valuable as their own person and in their own accomplishments, instead of labelling them.