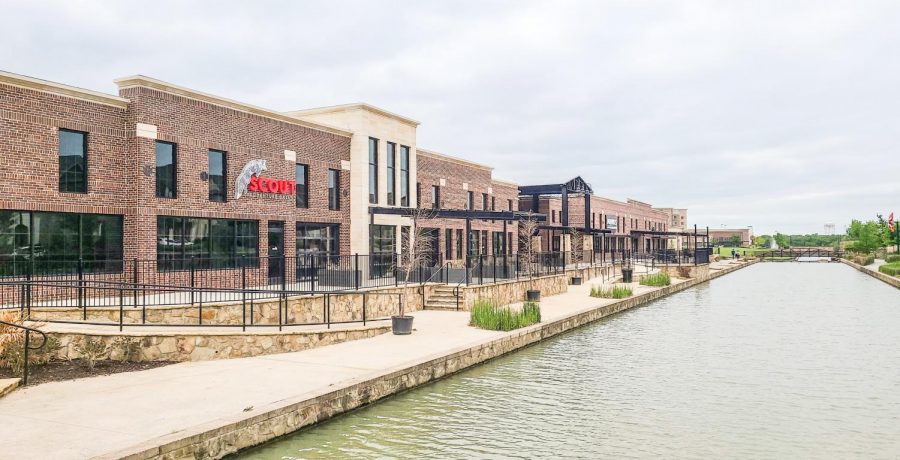 Scout is one of the restaurants close to completion on the Riverwalk.

Editor’s note: this story includes interviews by The Marquee from spring 2020, unpublished due to the pandemic.

The Flower Mound Riverwalk’s chapel and the adjoining reception hall recently opened up to the public, while two restaurants also appear close to completion. Numerous apartment complexes have also been built and opened in the past few years, but the chapel and reception hall are the first amenities to host public events.

The Riverwalk, which was approved in 2008 and is located near the Texas Health Presbyterian Hospital between Morriss and 2499, has a history of missed opening dates.

Currently, amenities such as the splash pad and farmers’ market have not been started. There is also no construction on the amphitheatre that was included in the original plan, but on March 9, the Community Impact Newspaper reported that it may be replaced with a commercial event space. There are no specific dates for when the next amenities will open.

A grand opening for Phase One of the Riverwalk was held on April 25, 2017 to show off the new water feature, large art pieces and walkways.

At this event, former Town Manager Jimmy Stathatos told The Marquee that he believed seven new restaurants, an amphitheatre, a waterpark, retail stores and a wedding chapel would be fully completed within 12-18 months, or by the summer of 2018.

CEO and President of Centurion American, the development company for the Riverwalk, Merhdad Moayedi was also at the event.

“Now it’s time to go vertical with all the restaurants and the amphitheatre,” Moayedi said.

Since then the shells for future restaurants have lined the flowing waterfalls for several years with slow progress being made toward opening. In February 2018, Centurion American spokesperson Sarah Dodd told Community Impact Newspaper that the chapel would be available for wedding services in early 2019, while the restaurants would open by the summer of 2019.

When Community Impact Newspaper interviewed Dodd again in January 2019, she said the plans were on track. But by the end of the year, nothing opened.

Over the years, citizens have expressed frustration about the lack of promised amenities. This includes local real estate agent Robert Day, who was interviewed by The Marquee in 2019.

“It was supposed to be a vibrant community around the Riverwalk and it hasn’t materialized,” Day stated in a text. “It’s smoke and mirrors, they tell people restaurants are coming and then we forget… then we remember later and they say it again.”

Graduate Devansh Dalal was interviewed by The Marquee in 2019. He said that he was also frustrated with the lack of developments on the Riverwalk, although he enjoyed looking at the scenery with his friends.

“But then you want to eat,” Dalal said. “What do you expect me to eat? Water and grass?”