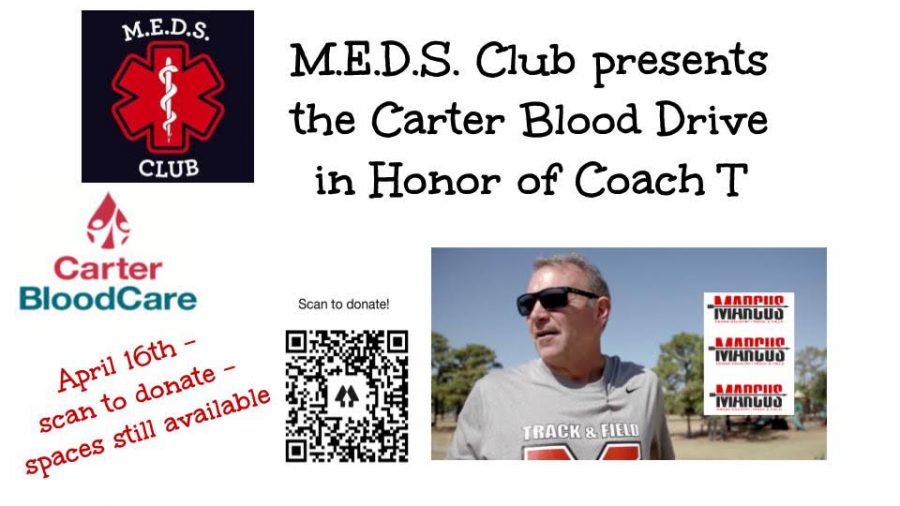 Students and staff can scan the QR code above to sign up to donate at the M.E.D.S. club blood drive, which is being held in honor of former coach Steve Telaneus.

Students and staff have until tomorrow at midnight to sign up for the annual M.E.D.S. club blood drive, which is in honor of long-time coach Steve Telaneus. The drive will take place in the Marauder gym this Friday, April 16 — two weeks short of the first anniversary of Telaneus’ death.

Head Cross Country, Track and Field Coach Andrew Reinberg, who previously worked as Telaneus’ assistant, said he believes the blood drive is a good way to commemorate the legendary coach.

“It’s not always just about athletics, it’s about life in general and being a good person, being the best version of yourself for others,” Reinberg said. “And by giving yourself, giving blood… that’s a way to kind of be self sacrificing. He was always about that.”

Seniors and M.E.D.S. club officers Dehvyn Veazey and Tanner Taylor did most of the work to plan for the blood drive.

“It’s been a lot of fun, and it’s been stressful too,” Veazey said. “But it’s just been a lot of emailing and figuring out formations.”

Because of COVID, they made a Linktree with all the required forms so students and staff can easily sign up and receive reminders. They also had to accommodate for virtual students, who will have to enter through the hallway between the ninth grade and main campuses.

“We have to spread it out just a little bit more for distance protocols and whatnot,” Veazey said.

Although the pandemic complicated some things when it came to planning the drive, Veazey said it’s also a vital reason to donate blood.

“With COVID, it’s becoming increasingly more difficult, because people are worried about their own safety, to go out to the Carter blood drive places and donate,” Veazey said. “So they need as much blood as they can get.”

According to Veazey, the group needs 30 more people to sign up to reach their goal of 160 possible donors. From there, he hopes 120 would be approved to donate, which could save up to 360 people.

“Why not try at least?” Veazey said. “This one, small 30 minute experience, it not only gets you out of class, but you can save multiple lives.”

The M.E.D.S. club will hand out free t-shirts and McDonald’s gift cards to donors, who must be at least 16 years old and 110 pounds; 16-year-olds must fill out a parental consent form to donate.

Although some students may be nervous about donating blood, Reinberg hopes Telaneus’ legacy of love and respect for others motivates them to sign up.