Rookies in the ring 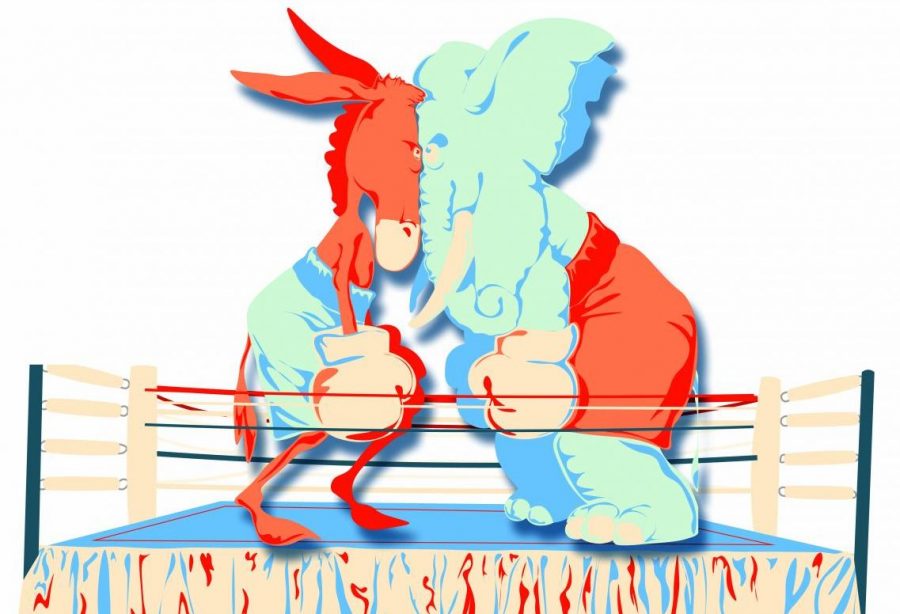 Teenagers have become more active in politics in recent years, especially with the upcoming presidential election.

Although America has a history of low voter turnout from the younger generations, students have recently become more politically engaged, especially with the upcoming presidential election. In a poll of 300 students, 78 percent of students said they’ve seen this increase, with 46 percent saying involvement increased significantly and 32 percent seeing a slight increase.

Junior Luke Dodson, who identifies as a leftist, agrees that students are more interested in politics.

“I’ve seen a much greater awareness and a much greater urge to actually do something,” Dodson said. “I think people are realizing how vital politics are to not only our future, but the people around us.”

AP Government teacher Carey Petkoff said that she began to see this shift in 2018. Before then, she said that students occasionally went to political rallies but rarely got hands-on experience.

“I had a lot of students directly involved in various campaigns and that was definitely a change from previous years,” Petkoff said. “… These kids were going out, knocking on doors, campaigning for local candidates.”

Petkoff believes that the controversial nature of President Donald Trump and his policies, as well as the media attention they illicit, are the main reason why teens and young adults are gaining an interest in politics.

“Donald Trump is anything but boring,” Petkoff said. “So I think that brings a lot of attention to it and elicits a response one way or the other.”

Topics such as climate change, college prices, BLM, gun rights and COVID-19 are major talking points in the election. Senior Carson Fisher, who considers himself left-leaning, believes that they are important to young voters.

“I think a lot of our generation is concerned about things like civil rights, whether that comes like LGBT or Black Lives Matter,” Fisher said. “Whether they’re against it or for it, I think that those are big issues, and I think also anything that has to do with the environment is also pretty big.”

The topics being discussed during the election have played an important role in helping students form their political opinions. Senior Matthew Hill, who considers himself a Conservative, believes that political topics such as gun control can motivate teens to vote for candidates they might not agree with in other ways.

“Even if their social views aren’t all that Conservative, I know a whole lot of guys who enjoy hunting and so they want Trump to win just because they don’t want gun rights to be taken away,” Hill said.

Of the 80 students old enough to register to vote, about 61 percent said they will be voting in the upcoming election. Petkoff helped 68 students register to vote this year, which is slightly lower than the 75-100 kids she gets most years. However, she believes this is because less students are on campus.

“I think the difference is that I didn’t have to try so hard to get kids to register, so they were a little bit more willing and wanted to get registered,” Petkoff said. “I had kids seek me out on their own if I missed their classroom when I was going by to register people and that does not happen.”

Senior Tristan Fredrick, who identifies as a Conservative, registered with Petkoff. He voted early for Donald Trump. Fredrick believes that a lot of teenagers complain about the government but don’t do their part to get their message across by voting, which he hopes more teens will do in this election.

“A lot of young people aren’t voting and getting the messages that they really support,” Fredrick said. “They’re not pushing for that and getting it, using their ability to vote to kind of get the message out and get what they want done.”

On the other hand, Fisher voted early for Joe Biden. He said that while the older generations sometimes view teenagers as lazy and apathetic when it comes to politics, he believes younger voters actually do care about America and each other, it just doesn’t transfer over to the polls. Fisher agrees that it’s up to teens to fight for the changes they want to see in the government.

“The system has been so long left to the older white male, that it doesn’t really appeal to a more diverse younger generation,” Fisher said. “So we have the perception that it’s only old people that participate, but that’s not the case. We only view it that way because we ourselves aren’t participating.”