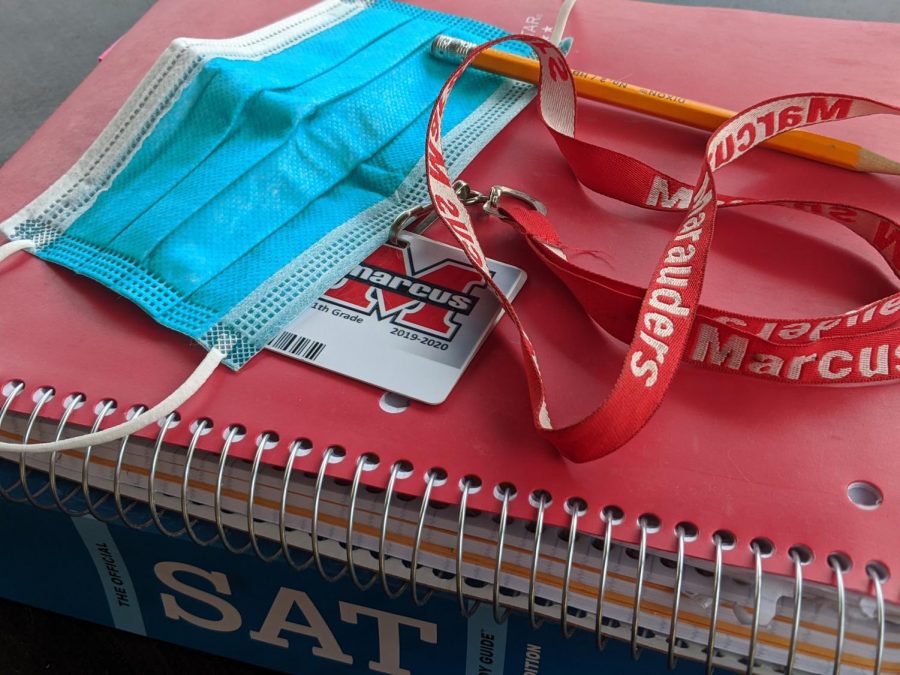 The district is currently planning on allowing students to choose between in-person and virtual classes for the upcoming school year.

Editor’s note: This story was named a superior news story in the 2021 TAJE Best of Texas contest.

LISD is planning to offer both in-person and virtual learning options for the upcoming school year, which starts on Aug. 19. The start date was pushed back a week to give the district time for online training and technical preparation. Parents will be able to begin deciding which learning option they want their children to take part in by Wednesday, July 15.

The district’s Board of Trustees announced the plan during a meeting on July 8.

“We want to ensure safe learning and working environments for our students and staff, so new operational guidelines are required,” Superintendent Dr Kevin Rogers said during the meeting. “We have been working frantically on those and done a good job.”

Senior Javier Buendia believes opening schools will have both positive and negative effects.

“I guess the pro is that school will be back to normal, sort of… but one of the cons is that I think there’s going to be a very large spike in cases,” Buendia said.

Virtual learning students will be required to spend four to six hours taking live classes every day under the regular grading system. Sophomore Layla Sullivan said that while losing the social aspect of school will make online classes more difficult, it is the safer option.

“If cases keep on spiking and people keep on going out and not being as careful as they should be, in school the disease is going to get spread,” Sullivan said. “So I think that maybe we can do either the first nine weeks at home or do the first semester or so at home.”

Prekindergarten through fifth grade students will only be able to choose between full time virtual learning or full time in-person learning, with the exception of the Dual Language Pathway. However, middle and high school students will have the option of taking some electives on campus through a program called Virtual PLUS.

“It’s very difficult to do that online because for art classes, they don’t have the resources at home always or for theater you don’t have the performance aspect, necessarily, and for sports, obviously, you practice with your team,” Sullivan said. “So I think that in-person classes will be good for the classes that really, really need that, but I think limiting interaction as much as possible is the way to go.”

Virtual PLUS will apply to secondary students taking UIL electives, which are fine arts and athletics. Buendia, who is on the varsity tennis team, thinks this is a good option for sports.

“I think any decision that they make, there’s going to be a lot of backlash to it,” Buendia said. “But I think that if it is a required in-person class, like any other sports or anything like that, then they are going to have to let people do it. Otherwise, they should just cancel the class.”

High school students will also be able to go on campus to take non-UIL electives that aren’t offered online. This could prevent some of the issues that certain classes, such as Academic Decathlon, would face while going virtual.

“We pretty much test every day so that we know the material, but we usually go over questions and answers in class after those tests, and I think that that’s going to be difficult to schedule online,” junior Kaitlyn Williams said. “But it’s also hard because it really is kind of a team, and being together and interacting with each other is an important part.”

Freshman humanities teacher Tracy Jennings said that students seem to do better in classrooms, especially after she taught online at the end of last year.

“The pros are that students learn more when they’re face to face with their teacher versus online,” Jennings said. “For instance, we had several cases last semester where kids were online but when they got called on they weren’t actually there.”

Rogers agrees that students benefit most from in-person classes, so he hopes they will be able to return to campus.

“I don’t think they realize that online is not the same version as what they experienced this past spring. It’s a much more rigorous, extensive version,” Rogers said during the meeting. “So we truly believe that the best version of education is in-person.”

According to Deputy Superintendent Dr Lori Rapp, LISD will require schools to follow safety guidelines for in-person learning. Each campus will be assigned to one of five protocols based on the severity of the virus in its community. A task force developed the protocols to range from “no mitigation,” which does not have any restrictions, to “shelter in place,” which requires all students to learn remotely.

“While we have not yet determined the criteria for what would constitute a move from one level to the next, we’re still working through that, we’re confident that their work… and our philosophy on this approach provides the flexibility we need,” Rapp said during the meeting.

The task force recommends that schools start the year with “significant mitigation,” which has the most restrictive guidelines while still allowing students on campus. This currently includes requiring face coverings and temperature screenings, limiting the gathering of students in groups, encouraging hand washing and sanitizing throughout the day, prohibiting visitors on campus and providing Grab-and-Go meal options.

Jennings often has large class sizes, but she does not want to change the experience of her class by breaking it up. She said that one of the potential safety measures the district is looking into is putting up Plexiglass in classrooms.

“We would follow whatever guidelines the district gives us as well as doing our best just to keep the kids safe,” Jennings said. “So maybe a little less grouping together and more individual, old school seating to keep the kids further apart and obviously enforcing the mask rule.”

Gov. Greg Abbott’s statewide mask order does not apply to children under the age of 10. However, Flower Mound Family Practice Physician Dr Jack Johnson said that while he is glad both types of learning are currently being offered, he believes that everyone should wear a mask at all times.

“If you got a kid that says, ‘I am absolutely not going to wear a mask,’ that kid’s not a candidate for in classroom studies,” Johnson said. “Everybody’s going to cooperate on this because you have to remember, it’s not just your health you’re protecting, it’s someone else’s health.”

However, even if the district takes every possible safety precaution, Johnson said that students who return to campus will still be at risk of contracting the virus and spreading it to others. He believes that because COVID-19 cases are increasing daily in Denton County, reopening schools may be a bad idea within one or two weeks.

Rogers said he is prepared to change the plans if COVID-19 progresses and that the district is working to create guidelines on what to do if cases spike or if any students, teachers or members of their households get sick. This includes possibly extending in-person school days to bank time, which would allow a campus to close for one to three weeks if needed without pushing the school year past Memorial Day.

“I’m an eternal optimist. I have been my entire life. I certainly hope we start school, everything goes as planned, no closures, no changes in our plans, etc,” Rogers said during the meeting. “But I’m also realistic, and I just don’t think that’s going to happen. So we’ve talked numerous times over the last four months that we have the need to be flexible and nimble. That’s not going to change anytime in the near future.”