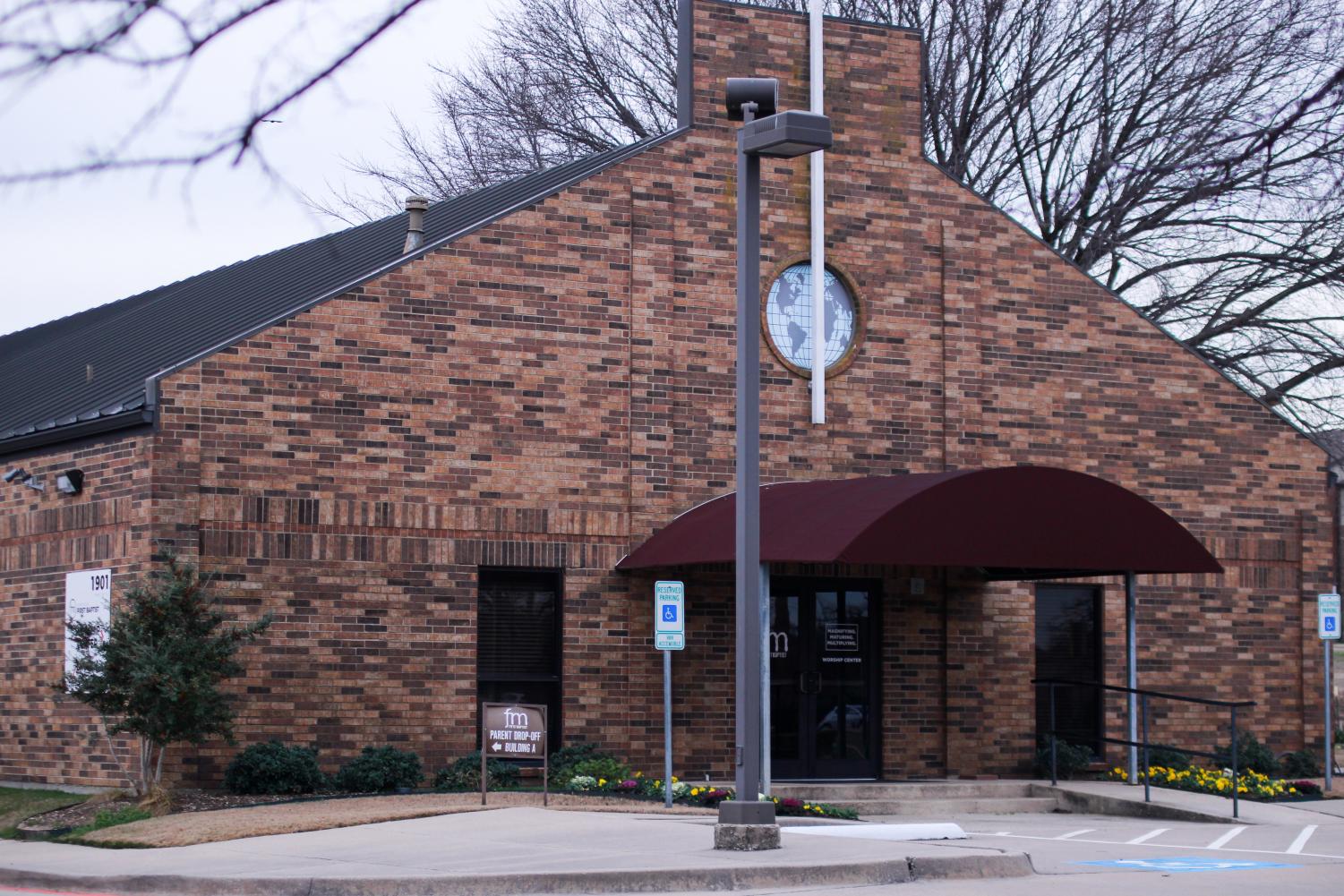 Pastor Donald Tittle was directly impacted by the first church shooting in the United States at First Baptist in Daingerfield. This has affected the way his church has handled security precautions. They currently have a police officer and security team on the grounds during church assemblies. (Kaitlyn Hughes)

Pastor Donald Tittle was directly impacted by the first church shooting in the United States at First Baptist in Daingerfield. This has affected the way his church has handled security precautions. They currently have a police officer and security team on the grounds during church assemblies.

Editor’s note: this story was named as an honorable mention for news features in the TAJE Best in Texas contest.

Within the past few years, mass shootings have increased throughout the country. Places of worship have become a target, especially in Texas, the home of the first recorded mass church shooting and the most recent.

It was Sunday when Kieth Thomas Kinnuen came into the church just before the 250 members of the congregation were about to take communion. He took out his shotgun and opened fire, shooting and killing Tony Wallace and Richard White before two members of the church’s security shot and killed him.

Math teacher Karin Munro attends a Church of Christ in Flower Mound, so the White Settlement shooting was personal for her.

“It should be a place that’s safe,” Munro said. “You shouldn’t really have to worry about shootings and violence during your worship service. I just feel bad for the congregation, and I think it’s gonna be a long time before they really feel safe and normal attending their church service.”

Although she said that she felt safe in her own church, this recent shooting at a church similar to hers did concern her.

“It does make me worry about attending church,” Munro said. “People may be more worried now that there’s been another shooting especially because this is so close to home.”

For the pastor of First Baptist Church in Flower Mound, Donald Tittle, these recent events hit very close to home.

Hymns rung throughout the sanctuary as the congregation was  listening to the choir. Alvin Lee King III, a former high school math teacher, pushed his way through the huge wooden doors. He stood at the back of the church in two flak jackets and an army helmet. One hand held an AR-15 rifle, and the other held a M-1 rifle, both with bayonets attached. He interrupted the choir, screaming,“This is war!”

He then fired in the sanctuary. People fell to the ground below the pews, hiding from the bullets that bounced off of the yellow brick walls.

That day he killed five people and injured 10 others.

A few miles away, a young Donald sat in the car with his family on the way back home to Daingerfield, upset about having missed church service that morning.

The shooting at First Baptist Church in Daingerfield, Texas marked the first mass church shooting in the United States. Donald’s family first heard about the shooting while on their way home and were immediately worried because they had family and close friends attending the church that day.

They soon found out that 7-year-old Gina Linam lost her life in this shooting. The family was hit hard because Donald’s mother used to babysit the child. She was the youngest one to die during the shooting at Daingerfield.

First Baptist in Daingerfield decided not to repair the sanctuary after the shooting as an act of remembrance. To this day, there are still holes in the sheet rock of the walls where the bullets hit. Daingerfield commemorated those who lost their lives by renaming all the different baseball fields after children who had died in the shooting. Donald said that seeing other children playing baseball on fields named after children who are deceased reminded him that out of death comes new life.

He often finds himself trying to make his 8-year-old son aware that he is growing up in a violent and damaged world and has had to incorporate gun violence awareness into his parenting.

“We teach them what foods to eat, we teach them to brush their teeth and now it’s a part of parenting that we teach them if someone tries to harm you, this is what you do…,” Donald said. “Well now in the same way they had those discussions now we’ve added gun violence to it.”

Being directly affected by this shooting shaped his opinions about the role church leaders have regarding security.

Two years ago, another  church shooting at First Baptist Church in Sutherland Springs, Texas, which is just outside of San Antonio, killed 26 people. This has been the worst reported church shooting in the United States.

Both the shooters at Sutherland Springs and White Settlement had accessed guns illegally and had been reported as aggressive in the past. Several members of the church recall Kinnuen coming and asking the church for money and being frustrated and upset when they would not give it to him.

“We are put on the front lines helping people at their most vulnerable weakest moments, and sometimes they are struggling through some things and their responses aren’t healthy,” Donald said. “We want to help protect them and protect the rest of our flock that we’re over.”

Donald said that having a shooting happen so close to him made him aware of gun violence as a whole. However, he did stress that in order to prevent more instances of gun violence, society needs to work on healing themselves and each other as people so nobody is in the mind space to hurt others.

It should be a place that’s safe. You shouldn’t really have to worry about shootings and violence during you worship service.”

This shooting has made some question the new Texas law regarding the policy in which a gun is permitted on a place of worship if the church allows it. Others say that because the church permitted weapons, the security team was able to shoot and kill the gunman, which saved lives.

Donald doesn’t discourage or encourage his congregation to bring guns. His church has an armed police officer on campus. Donald feels as though it is something they need because they are a small church and could be seen as an easy target. However, although they have armed security and a police officer, Donald has emphasized the fact that the church doesn’t and shouldn’t rely solely on guns for their safety.

“We need to remind ourselves and our church that yes, we’ve done things so that we can protect ourselves, but the weapon is the last resort,” Donald said. “We have a much greater weapon, we have the truth, love and word of God that can change Man’s heart.”