The school received an A and LISD received a B+ rating in the Texas Education Agency 2019 Accountability Report on Aug. 15. 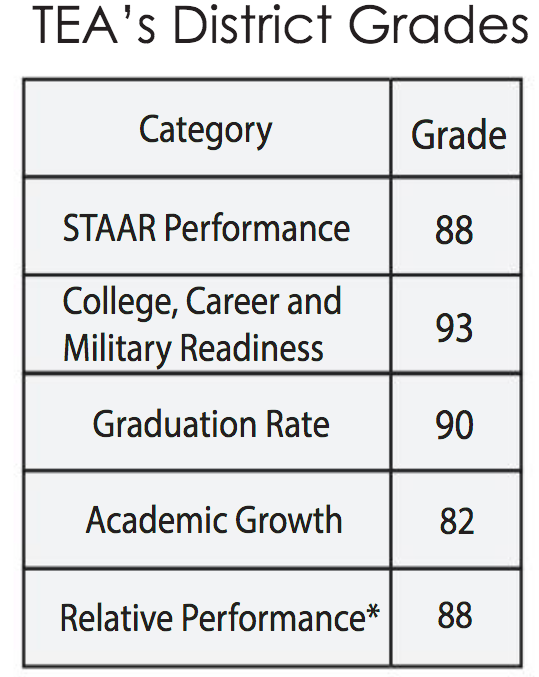 The school received an A, and LISD received a B+ rating in the Texas Education Agency 2019 Accountability Report on Aug. 15. The report evaluated categories of student achievement, student progress and closing the gap between socioeconomic status and level of education.

House Bill 22 led to the creation of the accountability system. It was introduced in June 2017 to measure the quality of districts and campuses in Texas by using letter grades. After being implemented in August 2018, the bill created controversy among school districts, with 25.1 percent of districts earning an A and 56.4 percent earning a B.

“All of the teachers we’ve had have been amazing and taught me everything I need to do to succeed in my class and my future,” Ryan said.

She also credited the efforts of the student body for Marcus’s receiving an A.

“I think all of our students are really hard working and all of us are trying to get into good schools and have a successful future,” she said.

Superintendent Dr. Kevin Rogers sent a statement on Aug. 15 to parents addressing the fact that a large amount of the report had been based on STAAR test scores and expressed how he disagreed with the report’s grading system.

“No student should be solely judged on standardized testing, nor should the schools that serve them,” Rogers stated.

He  further referred to the accountability system as being “based solely on a flawed standardized test.”

Senior Anna Ryan acknowledges that the emphasis on test scores is unfair because of possible differences in each student’s circumstance, but she also understands why using scores might have become such a common procedure.

“There’s obviously not really any other way besides standardized testing to see because they can’t go and interview every student at every school in how they’re doing,” Ryan said.

AP Chemistry teacher Janet Hutley also considers the use of a letter grade to be unfair.

“Any time you cook [a score] down to a letter, it just makes a very complex scale too simple,” Hutley said.

While LISD received a score of 90 for closing socioeconomic gaps between students, the district still was given a B letter grade because at least one school scored a D or an F.

Ryan BakerThe school received an A and LISD received a B+ rating in the Texas Education Agency 2019 Accountability Report on Aug. 15.

“That’s a level of criticism that I don’t know if we should even take the B seriously if you’re judging the size of the district based on one failed campus,” Hutley said.

To Rogers, the report failed to convey the district properly.

“Texas students would be better served by a comprehensive community-based accountability system, which looks beyond high-stakes, multiple-choice tests,” Rogers stated.

Ryan agreed with Rogers about how poorly the grading reflects school performance, but rather than focus on test scores, she felt that the report should focus more on economic status.

However, Ryan agrees with the grade LISD was given.

“I think that makes sense in my mind that we got a B and not passing with flying colors,” Ryan said.

Hutley notes the difference between LISD’s score and the school’s score and credits the relative privilege seen on campus.

“I know we have pretty broad demographics but there are schools in our district that students really struggle with day-to-day needs,” Hutley said.