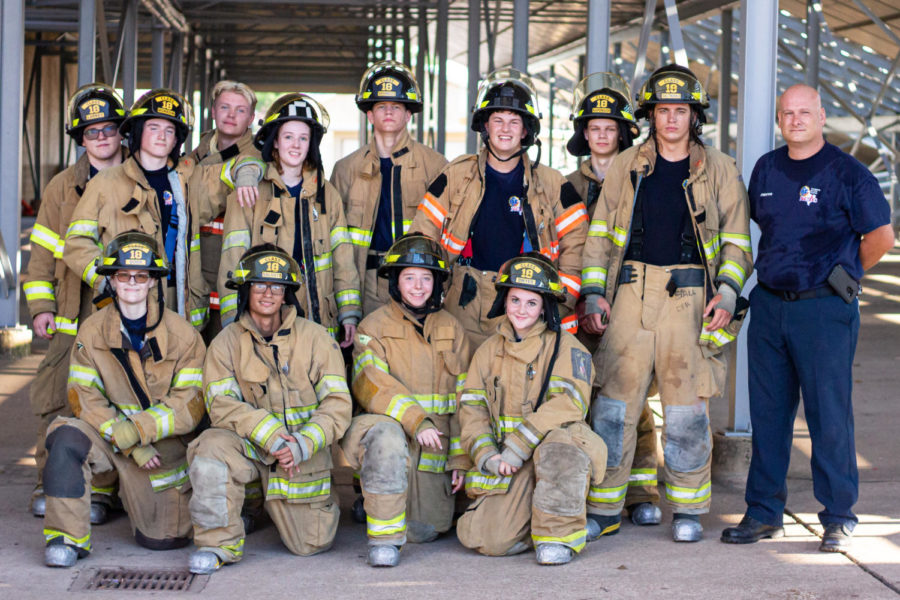 The firefighting program gathered for a group photo after practicing forcible entry, which included multiple ways to pry open an almost 300 pound door jammed with pieces of wood.

Editor’s note: this story was named as an honorable mention for news in the Press Women of Texas high school contest. It also won third place for print news features in the ILPC contest.

It is 8 a.m. as twelve seniors in heavy firefighter gear crawl on their hands and knees by the bleachers in the Lewisville High School stadium. They’re doing bear crawls in “bunker gear,” which includes gloves, pants, a jacket, an air pack, an air pad and a helmet. Though it’s early, it’s still warm wearing all the extra gear. But these students are used to it. They are in their second year in the LISD firefighter program.

Senior Bryce Sherwood was inspired to take this class by his dad, who works at Grapevine Fire Department as an assistant fire chief.

“It’s a really good class, and it provides a lot of benefits for people that want to get out into the job world when they are done with high school,” Sherwood said. “I see myself doing it for a long time after this.”

After students spend two years in the program, they have the ability to receive a Texas Commission on Fire Protection firefighter basic certification and a Texas Department of State Health Services EMT certification. These certifications come in the form of tests which then allow students to have the correct qualifications to eventually become firefighters.

After they finish the program they become eligible for the job at 18 and can make up to $55,000 a year. This is due to the high demand for firefighters in the Metroplex.

Another benefit of the class is students get to experience what the job is like in real life. Although students involved are younger and there are a few differences, they go through the same drills and activities as students enrolled in college programs.

“These kids get to see everything and do everything that a regular fire academy does,” teacher Curtis Burt said.

Many elements of the class are physically demanding, including drills that involve running up and down bleachers in full gear, pulling fire hoses and breaking down doors. Because of the nature of the program, Sherwood said he wouldn’t recommend it to someone looking for an easy class or that isn’t interested in becoming a firefighter.

“I feel like you have to know what you want to do because there is too much work you have to put in to not reap the benefits of this class,” Sherwood said.

One of the main goals of the program is to keep students interested in firefighting on the right path while they’re in high school so they can be successful in their careers later on. Certain offences, such as a DUI, cause hiring delays for hopeful firefighters, which can last years. Students involved in the program are encouraged to keep a clean record and focus on their goals ahead.

“One of the biggest problems we’re having now is, when we are hiring firefighters for the job, their background checks are awful,” Burt said.

He wants students to know that if they make the right choices, they can get a job right out of high school.

Junior Will Sparks looks up to firefighters, partly for embracing many of the same principles that the program encourages.

“I always saw them as good role models to follow,” Sparks said. “They don’t tolerate a lot of things like alcohol, drugs or misbehaving.”

Although all students are welcome to join the program, most people involved are currently male. However, Senior Matilyn Cady encourages more female enrollment.

“Three percent of the fire service is women,” Cady said. “So it is being able to show that we can do it and that [the instructors] don’t have to lower the expectation. Hopefully one day, once I get hired on somewhere, I can be an inspiration to a younger girl and hopefully that three percent goes up.”

The program opened up to juniors and seniors in the spring of 2018, and is held at Lewisville High School Main campus during first period.