Food and shelter are usually the top priorities for those in poverty. While both are critical needs, people with low incomes don’t have access to other things often taken for granted, including feminine hygiene products. With the desire to make a change, junior DECA member Nikhita Ragam began raising money for She Supply, a nonprofit organization helping distribute feminine hygiene products.

“I’ve always wanted to do something that has a social impact,” Ragam said. “I think this plays into that because I’m at doing something for [an issue] I’ve always been passionate about and helping them on a greater level.”

DECA is an international organization for students interested in the business career path. Students involved create projects and compete in events that showcase their entrepreneurial skills. Ragam has been a part of DECA since the beginning of her sophomore year. This year, her project focused on fundraising for She Supply. Ragam said her involvement with the organization means so much more to her than a school project.

“It’s a good source of inspiration for me to continue to do more for my community,” Ragam said.

During the Marcus DECA for She Supply Bite Night at Chipotle, Ragam raised over $250 through a portion of the restaurant’s proceeds from the evening. Ragam also partnered with Mu Alpha Theta to organize a gift card drive where she collected Target and Walmart gift cards worth $700. When Ragam saw how much money she raised, she knew she was doing something truly valuable.

“It just makes me happy to think about there’s so many women that their needs will be met finally,” Ragam said.

Kathy Meyer, She Supply founder and chairman, identified how desperately women in poverty need access to feminine hygiene products while on a church choir trip during the summer of 2016. A friend showed her a video about women with low incomes that were not able to get these products and they both agreed that something needed to be done.

“I don’t think you have to have a fancy title or an Ivy League education to go make a difference,” Meyer said.

There are 161,000 female-headed households in North Texas alone that live in poverty. Many of these women use their feminine hygiene products for much longer than suggested or even go without them altogether.

“The more research we did, we were horrified,” Meyer said. “We had no idea until we did the work.” 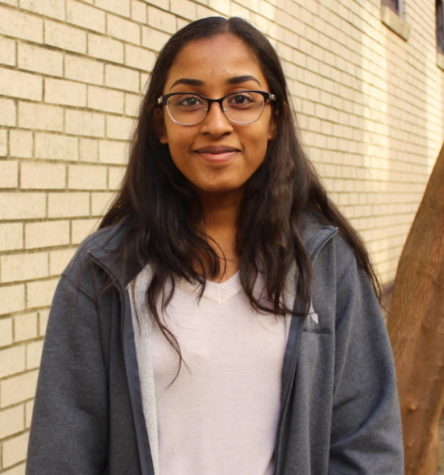 Maya HernandezIn addition to raising money for She Supply, junior DECA member Nikhita Ragam works with and fundraises for the UNICEF club. She also partners with the Dallas Holocaust Museum to raise awareness about anti-semitism and hate crimes.

Meyer met Ragam during a packaging party at Trietsch Church last October. At this event volunteers package feminine hygiene products in quantities of 10 per bag. They also include a kindness card with words of encouragement in English and Spanish. She Supply gives the bags to local shelters for distribution.

Ragam initially gravitated towards She Supply because she says activism and “period poverty” have always been important to her. As the daughter of Indian immigrants, Ragam has experienced the stigma of periods being perceived as unclean and not talked about in her culture, a challenge both Ragam and Meyer have encountered is addressing the stigma around poverty.

“It’s uncomfortable and it’s taboo. People don’t talk about that,” Meyer said. “You want to talk about your granite counters and your perfect kids.”

Both agreed that the stigma runs deeper in older people. They said that younger people tend to care much less and just want to help. Meyer said older women will often not invite their husbands to packaging parties, however, they sometimes show up anyways.

“Some men rally around it because they have sisters and mothers and they’re not embarrassed by it,” Meyer said.

However, there is much less discussion about the topic in government settings. Texas is one of 40 states that tax feminine hygiene products as regular sales, gross receipts or luxury tax. Products and services seen as unnecessary qualify for the luxury tax. In Texas, contact solution and soap are sold tax free — tampons are not. In addition, feminine hygiene products are not able to be purchased with food stamps.

“It’s impacted me a lot to see the prejudices against women,” Ragam said.

Meyer said that having sales tax on period products and being unable to buy them with food stamps “makes no sense.” To solve the problem, she said that momentum in Austin needs to build for laws to change.

“It shouldn’t be that hard to get products. I mean, somebody that’s been vetted through the state and is on welfare and is living in poverty, you shouldn’t make it hard for them,” Meyer said. “It’s a horrible situation as is.”

However, creating awareness and ending taboos are quite different from raising money. When it comes to social media, Meyer said that “a like is not equivalent to a donation.”

“Social media is good for creating awareness, but they’ve got to move from awareness to consideration,” Meyer said.

Typically, donations to She Supply are products brought to packaging parties instead of cash. The next packaging party is after school on Thursday Feb. 7 in the DECA room.