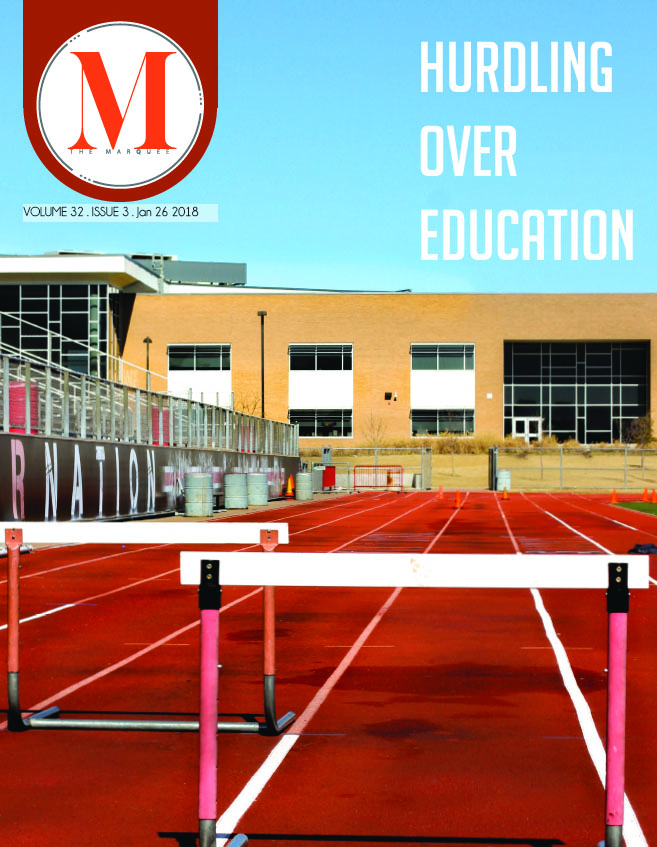 In recent years, LISD has moved to a more flexible learning approach which focuses on more student choice and direction, rather than traditional teacher-led techniques.

Some of the biggest changes are in English Language Arts (ELA) courses, which now include less required reading, shorter essays and daily SSR time. According to the district head of ELA, Secondary Literacy and Language Arts Administrator Sean Hood, these changes allow students and teachers more flexibility, but will still provide students with the skills they need to succeed.

However, not all teachers in the district agree. Hebron AP English IV teacher Ben Stroud says that the less structured teaching format is not providing students with the needed rigor.

“There’s a philosophy that if you let the student choose, then they’ll buy into their learning,” Stroud said. “But kids don’t buy into learning these days. They buy into Snapchat. They buy into Facebook and Twitter. Most kids don’t want to be challenged.”

Junior Avani Kawathkar is a student who wants to be challenged, and has noticed the lack of writing and books read.

“This English class hasn’t challenged me at all, we keep doing the same thing again and again,” Kawathkar said.

“I’m pretty unapologetic about saying we should teach to the highest denominator and not the lowest,” Forthun said.

Hood agrees and says that educators must never “dumb [things] down,” though he says misunderstandings may have caused curriculum rigor to decrease.

“When kids struggle on things and why we have achievement gaps, it’s not because they’re just not smart enough,” Hood said. “It’s because we’ve continued to lower the bar instead of challenging them.”

From 2014-2016 — English I STAAR students in LISD scoring as “Advanced” increased from 15 to 23%. However, students scoring “Unsatisfactory” also increased from 22 to 25%.
—
Source: Data Interaction For Texas Student Assessments

In regular English classes, literature excerpts, TED Talks or political debates have replaced reading entire novels. Some ELA students only read one full novel, and some may read none.

“We aren’t like an English class. We aren’t always sitting around reading a book, we are learning about racism and sexism,” Junior Mackena Parlane said.

Hood said that literacy changes and TED talks are “just as valid” as a resource, and if a teacher feels like the class needs reading skills, then the class may read passages instead. Though if a class can handle an entire novel, then the teacher can assign one.

“I think the purpose is focusing much more on developing literacy skills. You can develop those skills in lots of different ways,” Hood said. “You don’t have to read a certain text in order to get that.”

English III teacher and curriculum writer Jason Poe has appreciated the change in curriculum, as he says he’s “no longer welding the reading hammer.” He doesn’t have to dictate what students  read.

“Kids won’t read [full texts]. You can try and force it, but then it becomes onerous, and then you have to do reading quizzes— it becomes a ‘gotcha’ like ‘ha you didn’t read,’” Poe said. “So I kind of quit fighting that fight because I was losing.”

Poe says that the relevance of classic literature becomes clearer as students get closer to their profession.

“The classics will always be important, but in terms of the relevance, we have more freedom now,” Poe said. “You can go on YouTube and watch Thug Notes and get the general gist of whatever’s going on with Grapes of Wrath in a fraction of the time.”

But some English teachers worry that the flexible learning approach is being abused to allow on-level students to read less. If the trend continues, they believe students will not be prepared for more complex texts.

“I feel like we’re just trying to teach kids to read for pleasure, and there’s value in that, but you’re not going to be reading for pleasure when you go to college,” Stroud said. “And our job is to prepare you for college.”

Senior English teacher and NCTC adjunct professor Ira Sherrill says he has discussed this problem with other professors with whom he teaches at
NCTC.

Dr. Marshall Armintor, a lecturer at UNT, believes that only reading excerpts does not prepare students for college. He says that books like “The Scarlet Letter” are about more than just themes of sin and redemption— they are historical and cultural as well.

“I think the intention in providing just excerpts is to teach people how to do close reading,” Armintor said. “I think that’s a worthy exercise to look at isolated passages, but really, I think in order to do it right you have to read the whole thing including all the nitty gritty parts.”

Forthun says that specific titles aren’t important, as long as the teacher is selecting texts that challenge students and help them become culturally and historically literate.

“It’s difficult to wrap our minds around the concept of American exceptionalism if we haven’t read John Winthrop’s vision of the ‘city upon a hill.’ It’s equally difficult to understand the importance of being good stewards of our resources if we haven’t read Emerson and Thoreau,” Forthun said. “It’s impossible to know who we are and where we are headed if we don’t know where we’ve been and how we got there.”

LISD encourages 10-15 minutes of SSR every day, where students independently read grade-appropriate texts that they choose. Their teachers should conference with them about their choices. Hood says that if SSR is done right, then students will not fake reading.

“It’s easy to fake your way through it if the whole class is doing it, and the teacher is helping to guide all of that,” Hood said. “But with SSR…you can’t really fake it as easily. It’s another way to ensure that students are doing that deep literacy work of reading and thinking.”

Poe says that he appreciates SSR because he can interact with students about books they are more interested in.

Freshman Alyena Gilani says that students should do SSR, because it allows for students to build their vocabulary and expand on reading.

However, some students report that teachers are not conferencing with them, and that the 15 minutes of SSR has become a free time where they can be on their phones.

Another criticism of SSR is that it takes up too much class time—up to 17 percent. And for courses like BlendED English, which only meet at school twice a week, it can take up 30 minutes a week. Hood believes, however, that if SSR is done right, all students should be reading, and teachers should be actively conferencing with students about their chosen novels.

“Kids need lots of opportunities,” Hood said. “When we look at what’s being done in college coursework and things like that, it’s ‘hey, here’s an article. What is your response to this piece?’”

Sophomore Davidson Brown says that under this curriculum, his writing has improved, and he feels more confident in English. However, English III students Kawathkar and Shriya Patel say there has been a noticeable drop off in the number of assignments.

“We didn’t have a lot of writing assignments. We just had a few quizzes where we are given a prompt, and we write a paragraph,” Kawathkar said.

English IV teacher Ben Stroud also believes that students are no longer writing enough, so these students must work harder inEnglish III and IV to get back on track.

“It’s the kids that haven’t had the rigor, all they’re being taught is how to write a narrative,” Stroud said. “You don’t do narrative in college. You don’t even do narrative on the SAT.”

To prepare for collegiate writing, Dr. Armintor hopes that students are researching independently in high school. He places a great emphasis on students diving freely and deeply into topics they are interested in.

“The highest level of anything you could do is to think independently and to research independently, and the more people can start to do it earlier on, the better off they’ll be,” Armintor said.

Some former students from Marcus feel like their English classes didn’t well prepare them for writing at the college level. UNT sophomore Bryce Navarro says he writes essays every two to three weeks, and wishes he was “better prepared” for college.

“I feel like when I was at Marcus, we didn’t have to do any research papers, and in college I feel like that’s the majority of what you have to do,” Navarro said. “So when I got to UNT, it felt like I had to learn something completely new.”

The TEKS, which set the standards for Texas education, outline that research is a required skill. Hood says although students may not be writing longform essays, longer essays are not the only way to show research skills.

“What needs to happen is kids having lots of different opportunities to practice those research skills,” Hood said. “It’s not about that product, it’s about the process.”

Courses in blendED are designed to mirror college and grant students more responsibility for their learning. Students are only required to be in class on Tuesdays and Thursdays and can work from home on off days. Virtual Learning Director Donna Henry says that the blendED English curriculum is the same as traditional courses—the only difference is the class structure.

“The whole reason we have blendED is to provide more opportunities for teachers and students to work together one on one,” Henry said. “If it’s an online day, teachers should be conferencing with students about what they’re reading and what they’re writing.”

Some students enjoy blendED over a traditional course because it allows them a more flexible schedule. If a student is in a sport or has a demanding job, the structure of blendED allows them to have more time for schoolwork and extracurricular.

However, some students are critical of blendED because they say their class was easier than regular curriculum. In one class, students did not read any full novels, focused mainly on current political issues and did minimal writing assignments.

Junior Mackenna Parlane says that her class has “absolutely not” prepared her to write at the college level.

“It’s not realistic. The things that we are learning aren’t things we will be needing in a typical college class,” Parlane said.

Parlane also reports that the workload is better because there was no homework in her class. However, the class was designed to have more at home work, so she worries that this structure will not be how college is actually be set up.

“There is a huge separation between on level curriculum and and AP curriculum—bigger than the Atlantic and Pacific Oceans together,” Stroud said.

To narrow this gap, Forthun and others believe that teachers must prepare every student for their future—whether they plan to go to college or not.

“I think we do a great disservice to our Marcus students to assume that they’re not going to or are not capable of reading what’s difficult,” Forthun said. “Our responsibility is to prepare our kids to thrive no matter what path they follow once they leaver here.”

Three years ago, the federal government passed the Every Student Succeeds Act, which for the first time in history requires “that all students in America be taught to high academic standards that will prepare them to succeed in college and careers.” Hood states that LISD is living up to this expectation, and Forthun says that this should be Marcus’ goal.

“At Marcus, I feel we have an obligation to provide a rigorous curriculum for all our students and to support them and scaffold for students who struggle a little bit,” Forthun said. “And we feel that English is kind of critical— the skills they learn in English are critical to success no matter what the college major.”