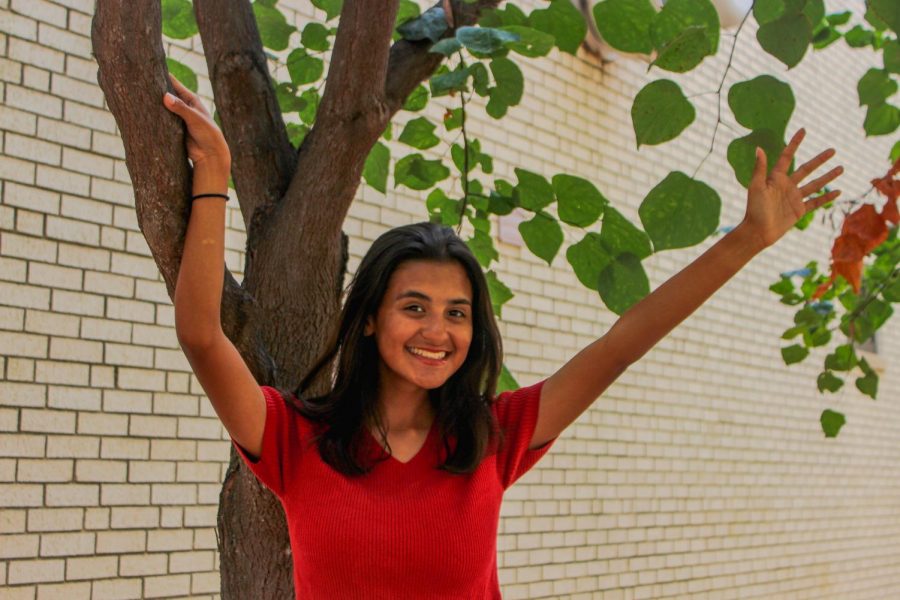 As a senior, Denise says she enjoys a more normal life now.

Senior Denise Rodriguez started thinking about diets when she was eight years old. During family gatherings she had heard her aunts berate themselves over their looks. I wish I were skinnier. My arms sag too much. That model is so fit. These words had begun to repeat over and over in Denise’s head.

Growing up, Denise’s female relatives struggled with body image. They emphasized a slender waist, a flat stomach. Denise soaked these phrases up like a sponge.

“It’s instilled in the way I was raised…. I do think it is something that kind of runs in my family,” Denise said.

Denise twirled in front of the mirror, examining her body. Dark hair, soft brown eyes, a toothy grin. Her small body was as frail as a baby bird. The giggling elementary schooler was ready to go hungry. From that age she vowed she would be skinny, no matter what it took.

Denise had just finished a seventh grade volleyball match. She was starving, but fast food was out of the question. When she arrived home, she barely had the energy to fix herself a meal: a salad, with lettuce, vegetables and grilled chicken only, no dressing. Dressing builds up calories, and 1000 was Denise’s daily max.

Instagram was her muse. Denise followed countless food and exercise blogs. She pored over these sites as if her life depended on it. And in a way it did.

“I really liked being in control. It was also a time period where I had other things going on, so it was the one thing I felt like I had a grasp on,” Denise said.

Seventh grade was the year her eating disorder reached its peak. Denise was exercising too much for someone who ate too little. She played volleyball and ran cross country, miles every morning and nearly every night. Her mind kept telling her to run or she would be a failure.

“I would avoid going to certain things because I knew I wouldn’t be able to control what I was eating there. That took a big toll on my social life,” Denise said.

When they were in eighth grade, Denise’s friend senior Mina Basharkah noticed Denise wasn’t eating when they were at lunch. Denise had a sandwich with low calorie bread and cheese, spinach, turkey, and some fruit and carrot sticks. She wasn’t touching it.

“She was kind of just sitting there,” Mina said. “I never really noticed until that day, she doesn’t really eat.”

Denise’s friends knew something was wrong. But she refused to accept their help.

“I would get so annoyed. Because people would tell me, ‘Oh, you look really sick,’” Denise said. “But I was so obsessed with controlling this aspect of my life that I hated when people gave their input.”

Denise looked at the clock. It wasn’t even dinner time and she was aching with hunger. She picked up an apple. How long had it been since she ate? Breakfast? Oatmeal with almond milk and a dash of chia seeds. Just enough to keep her in shape.

Denise took a deep breath. She grabbed the knife and slit the apple into thinner slices, leaving herself three. Denise dumped the rest in the garbage. She wouldn’t let her hunger get the best of her.
Denise’s mother Lucy Rodriguez saw a skeleton where her daughter used to be. She was underweight at 87 pounds. Denise weighed herself constantly. Her room was littered with mirrors, a constant reminder to check herself. Lucy felt helpless. Talking to Denise felt like speaking to an inanimate object. As a parent, watching her child go through her eating disorder was frightening. It was so unlike Denise. She who was once happy and energetic was now starving herself.

Lucy was determined to get her out of it. She consistently fed Denise, insisting that she eat enough. Lucy prepared half portions of chicken and salmon. Just a couple of bites was enough to bring Lucy temporary relief.

It wasn’t until eighth grade that Denise realized something had to change.

Her social life was nonexistent and she was exhausted.

“I was tired of feeling like my life revolved around what I was eating…,” she said. “I wouldn’t get to enjoy anything because I was always concerned about what I was going to eat.”

The first person Denise reached out to was her mother. Even though this period had brought some distance between them, they were still best friends. Her mother’s protective instinct immediately kicked in. Every day, Lucy would prepare her daughter breakfast, lunch and dinner. Denise was not ready to give up her control, though.

“The unfortunate thing was that I would throw a lot of it away,” Denise said. “When I would go to school she’s not going to know I threw away everything she made.”

Denise’s guilt won her over. She felt ashamed that her mom was putting forth so much effort to help her and she was sabotaging her hard work. She started to eat what her mom put in front of her, no matter how much her mind protested.

Slowly, Denise let go. It was scary at first. She so desperately wanted to hang on. But she knew this would be the best for her.

“I wanted to feel like I could have fun again and do normal things again without having to worry about food all the time,” Denise said. “It was so worth it because I felt like I was living again.”
Denise’s problem had been hard for Mina because she did not know how to help her friend. She was a confused and scared middle schooler.

“I was disappointed in myself when I….wasn’t realizing she needed help,” Mina said.

But she was inspired by Denise’s recovery.

“She understood that there was a problem and she was fixing it,” Mina said.

Denise wanted to physically track her progress, so she kept a journal documenting the fear foods she tackled. Forcing herself to eat red meat and fried food, which she had primarily avoided. Friends could also check her journaling to guide her through her journey.

“It was the easiest way to keep myself accountable,” Denise said. “The food journal was really encouraging because I could go back on harder days and see how much progress I had made.”

But the road to recovery was still bumpy.

“The most difficult part was letting go of something that I thought I was in control of,” Denise said. “Food is everywhere.”

Denise scrolled through her Instagram page. Supermodels and hourglass figures, attacking her with images that stung like a spear. She glanced away from her screen for a moment. It was her sophomore year. She had never been healthier. Denise took one good look at these profiles and saw them for what they truly were: toxic. Suddenly her way was clear. Each unfollow brought her closer to her goal. She was taking her life back.

Now Denise drives with her friends after band practice to Chick-Fil-A. She enjoys a meal of fried chicken and French fries. She inhales the food, her body rejoicing in its recovery.

“I would consider myself recovered because I know how to deal with it,” Denise said.

Mina encourages Denise in any way she can. She checks on her friend regularly, making sure that Denise has had a meal that day.

Lucy observed that Denise grew not only into a healthier person physically, but mentally as well. Denise became more resilient, and she learned how to walk away from toxic habits and relationships.

There are still moments of relapse, feelings of defeat. She, although rarely, has a few days where she hasn’t eaten much. Denise feels embarrassed during these instances. But she carries on.
“I just have to remind myself of how much I worked to get to where I’m at right now,” Denise said. “I’m ok….It’s been so good to enjoy normal stuff and not worry about what I’m going to eat all the time.”