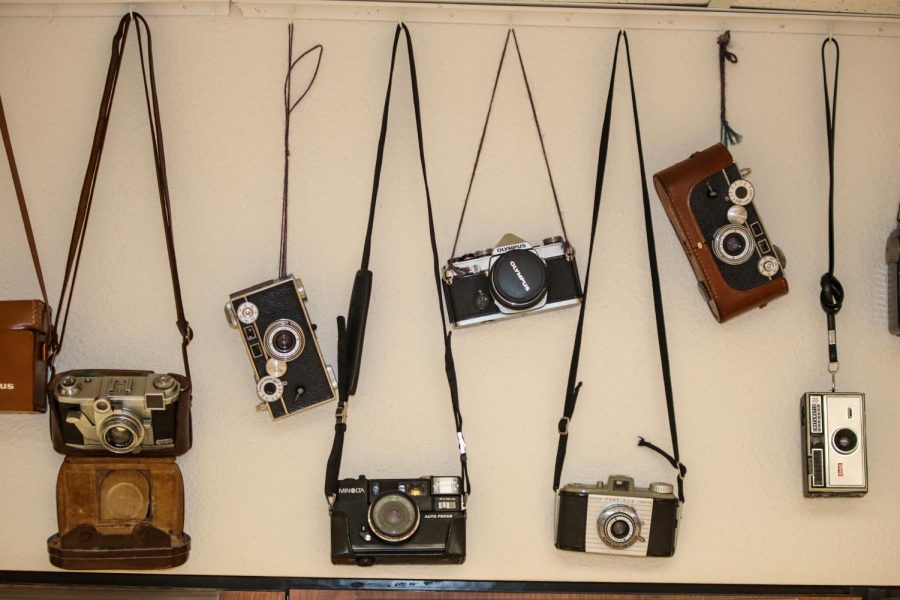 Photography teacher Kathy Toews keeps cameras on a wall in her classroom. They are all different ages and models.

When students enter photography teacher Kathy Toews’ classroom, their eyes are drawn to the left wall of the classroom. Cameras hang along it, ranging from the film cameras of the early 1900s to the first digital ones.

Once Toews started photography, After becoming a teacher, some students gave her their cameras as well, including a $4,000 camera. It was his dad’s, who used it as a doctor.

The cameras all started in different places from boxes in attics to inheritance from random relatives before ending up on display in Toews’ classroom.

“Slowly and surely people gave them to me,” Toews said. “Rarely have I ever purchased a camera.”

Each camera has its own character. The Agfa Karat keeps its lens hidden like a secret. The Polaroid Land Camera has a lens that pops out and extends. The viewfinder of boxy Anscoflex II points straight down.

For Toews, the display represents the importance of photography.

Toews grew up in front of the camera. When she was a child, her family lived in India and Pakistan. Her dad documented many of her early memories, like monkeys dancing at her third birthday party. Now, she has thousands of photos to look back on.

Although Toews didn’t pick up photography until later, watching the world through her father’s camera lens inspired her.

“My father was an amazing photographer, a natural photographer,” Toews said. “I always admired the fact that he could take such beautiful pictures.”

When she was younger, some of Toews’ fondest memories were gathered around family and friends’ projectors, looking at slides of vacation photos. While some found other people’s pictures boring, Toews felt different.

“Sometimes other people’s pictures aren’t as interesting to you as your pictures are,” Toews said. “But I have always been drawn to everyone’s pictures.”

Toews initially studied art at UNT, but switched to a printmaking degree after falling in love with the different ways she could turn her pictures into art.

“Once I started taking pictures, I just became consumed with photography,” Toews said. “I spent all my time in the darkroom, working with microfilm and cameras.”

The first few pictures she took weren’t staged. They were candid moments she found interesting.

“They’re not just portraits, [they’re] pictures of things [that are] cool, like a hubcap on a car at the parking lot,” Toews said. “Things that will catch your eye.”

Toews also remembers taking photos at the Texas State Fair, of the marching band and the kids playing games, the stuffed animals and balloons. The cameras became an extension of her, always ready for when she saw something worth storing in a photo memory.

Later, Toews traveled throughout the United States with her cameras, from up and down the California coast and Big Bend in the Texas desert to snowy Colorado. She has also taken them internationally, to Thailand, Italy, Switzerland and other countries.

“You name it, we ended up there,” Toews said.

However, no matter how far she traveled to chase the perfect lighting and scenery for a photo, they never seemed to compare to the portraits Toews took of her father. They traded their childhood roles, and he became her favorite subject.

“He was very special to me,” Toews said. “So taking pictures of him was a lot of fun.”

When she looks back on the pictures she took in the past, Toews wishes she could capture more. However, she remains motivated to continue creating art with her work.

“It’s not a nagging thing,” Toews said. “It’s more like, ‘Hey, you can’t rest on your old images. You have to keep making new ones.’”

When Toews first came to the school 25 years ago, teaching photography was not her first choice. She thought that teaching kids would lessen her love for the art.

However, the departing teacher convinced her to because otherwise there wouldn’t be a photography class.

“I said, ‘Okay, well, I better do that, because I don’t want photography to go away,’” Toews said. “And I found that I loved it.”

Advanced photography student and junior Annie Smrstik said that Toews helped her develop her own style and become confident as a photographer.

“She’s taught me to be myself, and…expressing that through photography is really nice,” Smrstik said. “You can get so much emotion out of just one photo.”

Toews’ favorite part of teaching photography is the connections with her students and her impact on them. She loves getting to know them as people and photographers, watching them grow to develop their own style.

“They take these amazing photos,” Toews said. “And they even come back years later, they might have gone and got a degree in photography and are teaching it themselves. So I think that’s really exciting.”

Toews’ classroom shows her journey from her father’s subject to a photography student to a teacher. She still has the first camera she used when she started taking pictures, an Olympus OM-1 film camera. The model has been around for almost 50 years, but she still teaches students to use older cameras like it and have the same appreciation for them she discovered when she was young.

“This thing will work until it falls apart,” Toews said.

Through her teaching, Toews expresses her passion for photography that she picked up on from her dad, sharing it with future generations of photographers and continuing his legacy.

“Photography is very much about capturing a moment,” Toews said. “And then that moment’s kind of sealed up in this little image, and you can pull it out anytime you need to look at it, remind yourself of what you did, what you looked like, where you’d gone.”