Junior reflects on coming out to friends and family 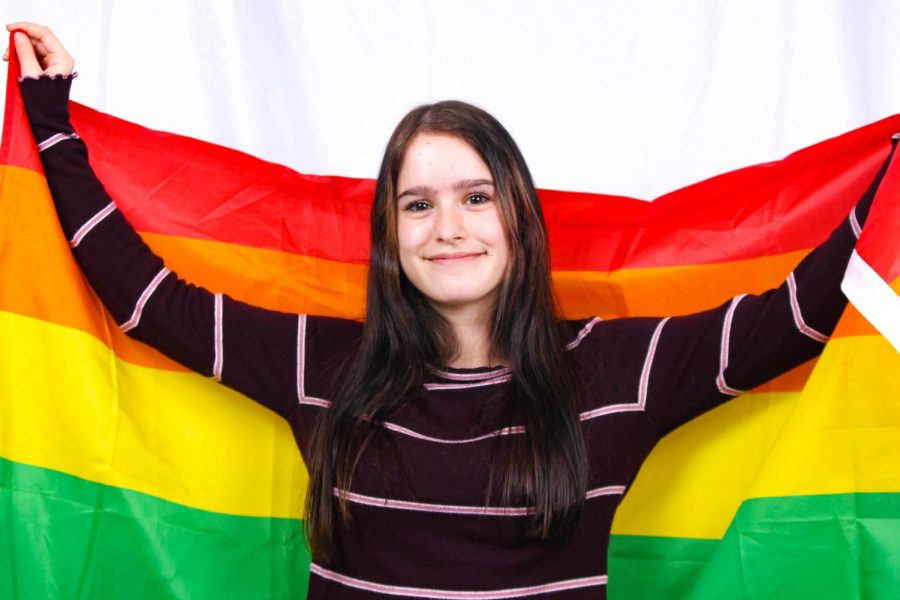 Junior Sydney Battiste came out when she was 11 years old. She identifies as bisexual.

Editor’s note: This story was part of an in-depth package of our Feb. 12, 2021 issue, which won first place for print in depth news/feature package in the ILPC contest. It was also a finalist for series/project in the Dallas Morning News high school journalism contest. It also won honorable mention for online feature stories in the 2022 TAJE Best in Texas contest.

Junior Sydney Battiste didn’t know how her mom would react to her coming out as pansexual and genderfluid at 11. Her mom was supportive when other family members came out before, but Sydney still had doubts.

Would I be kicked out? Would I be treated differently?

She texted her online friend, who was two years older and had already come out.

All I want for Christmas is for my mom to accept me.

Sydney already made a plan B in case her mother reacted badly. She asked another friend if she could live with them in Washington. The friend was ready to book her a train ticket.

“I was really just so scared that she wasn’t going to accept me,” Sydney said.

The same day, Dixie, Sydney’s mom, was looking through her daughter’s messages. Sydney was in fifth grade, so Dixie wanted to make sure she was safe.

That night, Dixie asked Sydney about the texts. The two of them talked in the kitchen and Sydney told her mom everything, including her fears — being disowned, having to find another home.

“I’m a single mom,” Dixie said. “It’s always been just me and her, so we’ve always been very close. So I think she was worried that if I wasn’t accepting that she was going to basically lose most of her family.”

However, Dixie had seen the way family friends reacted when their daughter came out. They weren’t accepting of their daughter’s sexuality, saying that she wasn’t their child anymore.

Dixie remembers thinking she couldn’t see herself doing anything but accepting with open arms. She believes that it shouldn’t matter what someone’s sexuality is, as long as they’re with somebody they love.

“This is my kid, she’s always going to be my kid no matter what,” Dixie said. “And I love her and adore her and support her. Regardless of anything.”

Sydney identified as pansexual and genderfluid up through seventh grade. In eighth grade, she began to identify as bisexual.

“I still don’t have a label for my gender identity, and I’m fine with that,” Sydney said.

Dixie said that at first, she was surprised when Sydney came out. She had to learn more about what pansexuality meant. She also had questions about what were the correct pronouns to address her daughter by.

At first, Sydney had trouble defining her sexuality and gender identity. She said that she was exposed to many different labels on social media when she was younger, which confused her. Sydney now identifies as bisexual and uses they/she pronouns.

“Being so young and impressionable, I definitely struggled with the label part of it,” Sydney said. “So I constantly changed who I thought I was, trying to fit in until I just decided not to worry about it.”

Besides educating herself, Dixie also joined a group called Free Mom Hugs Texas. The group is made up of parents of LGBTQ+ kids who attend pride parades and offer hugs to LGBTQ+ people who were disowned by their biological parents.

While Sydney said most of her family was accepting, some were more hesitant to understand, like her grandma.

“She was very conservative, no mixed race couples or anything,” Sydney said. “And I remember I told her over the phone because I was so nervous.”

Her grandmother sounded confused after Sydney first told her she had a girlfriend, but then her tone shifted. Sydney realized she was being condescending.

“I knew how she was and I was kind of prepared for that,” Sydney said. “But then it still really hurt just because I would hope that knowing that someone in her family that she loved was like that, she would change her opinion.”

While her friends were supportive at school, not all of Sydney’s classmates accepted her sexuality. In seventh grade, a boy in her math class called her a slur while they were waiting by the door.

At the time, she had a short haircut, styled like a boy’s. Sydney also had a girlfriend.

Taken aback, Sydney remembers being frozen to the spot.

“I was just really shocked,” Sydney said. “It was so unexpected.”

Although nobody else said anything to her face, Sydney felt like like the boy in her math class wasn’t the only one who thought that way.

“It was definitely scary not knowing exactly what they were saying and being a topic of discussion,” Sydney said.

Sydney believes that part of the reason she was targeted was because not many people were out at her middle school.

“Two people throughout middle school messaged me, talking about how they felt they were bi or something and they didn’t want people to know,” Sydney said. “It was just uncommon at that point.”

Sydney said that she has also faced some issues with people not wanting to address her using her preferred pronouns.

“A lot of people find problems with pronouns even though everybody has them,” Sydney said. “A lot of people will even just refuse to use the ‘they,’ which was really hurtful just because it doesn’t affect you.”

Even though Sydney has faced some difficulties because of coming out at a young age, Dixie believes that her daughter is in a better place now that she is older.

“I think now she has a really good support system,” Dixie said. “Her best friend is very supportive as well.”

When Sydney was younger, she felt as if she had to rush to label her sexuality and gender identity. Now, she believes that other LGBTQ+ kids can take time to figure out who they are.

“I was lucky enough to come to terms with it a long time ago, so now it’s just something I acknowledge about myself,” Sydney said.

Sydney wants her LGBTQ+ peers who aren’t out yet to know that she supports them, even if not everyone in their life does.

“Know that you are who you are, and that’s perfectly okay,” Sydney said. “And if people can’t accept that, or they won’t accept that then they aren’t meant to be in your life.”

Sydney said that she knows not everybody has supportive people around them, and is thankful to have family and friends that love and understand her.

“I’m definitely grateful that I can go to an accepting house every day,” Sydney said. “And I’m really, really lucky for that.”